Even if he doesn't want to change his policies, these hothead advisers need to leave the government 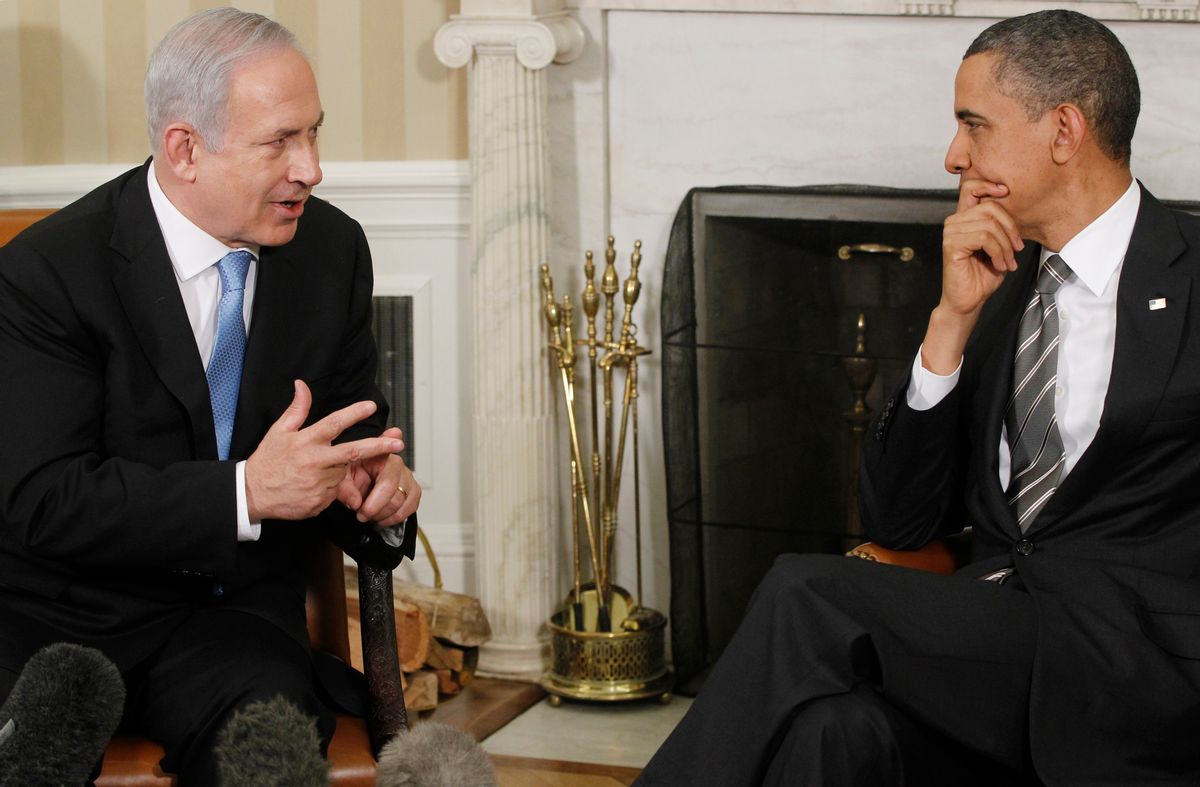 So now incitement on Facebook leads Palestinians to attack Israelis? For two decades Israeli politicians have trotted out an "incitement" red herring -- along with false claims that Palestinian Authority textbooks lead their children to throw stones.

Israel’s response is little more than misdirection and public relations.  The commonsense reason for why Palestinians in the occupied territories are taking to the streets is that they are sick of occupation and discriminatory laws.  Day to day humiliation and aggression by the Israeli military is what incites Palestinians.

One of the most provocative actions that incited and caused anger and humiliation among Palestinians was the cold-blooded killing of Hadeel al-Hashlamoun in Hebron whose dead, naked body was photographed and distributed on social media by Israelis.  There is also real anger that Israel has not caught and prosecuted the murderers of three members of the Dawabsheh family, including a toddler, who perished in a horrific fire set at night by settlers illegally occupying Palestinian land.  The failure of the international community to acknowledge occupation, discrimination and murder with impunity is akin to looking at apartheid South Africa and condemning black South Africans for resisting.

We are also terrified that Israel intends to change the status quo at the Al-Haram Al-Sharif.  Palestinians simply do not believe Prime Minister Benjamin Netanyahu when he claims he has no intention to make changes.

We have good reason not to believe him because he has surrounded himself with coalition partners actively promoting change there.  Rather than dismiss them, they remain in key posts stirring up fear among Palestinians and anti-Palestinian hatred among their constituents.

Agriculture Minister Uri Ariel remains in the government despite arguing, “We’ve built many little, little temples, but we need to build a real Temple on the Temple Mount.”

And Deputy Foreign Minister Tzipi Hotovely, a demagogic bomb-thrower, maintains, “My dream is to see the Israeli flag flying over the Temple Mount.”

These people are among the extremists helping Netanyahu run his government.  If Netanyahu does not want to change the status quo then he should rid his government of these hotheads.  If he keeps them, as he astonishingly may do with his new head of public diplomacy who has suggested that President Obama is anti-Semitic (a term being sucked of all meaning by revolting overuse), he sends a clear signal to Palestinians that the extremists have his ear on what they want done at the holy site.

Palestinians dread their intentions because Israel has systematically dismantled many other Palestinian institutions in Jerusalem over the past two decades.  Already, most Palestinians from the West Bank, Gaza Strip, and the diaspora cannot travel to Jerusalem to pray at Al-Aqsa mosque.  Under Israeli law Palestinians are interlopers in our own land.

Our being reduced to “otherness” in our own land points to larger concerns that President Obama should raise with Prime Minister Netanyahu.  With the prime minister showing no interest in advancing a two-state solution – Netanyahu’s caveats would result in one expansive state of Israel and several disconnected Palestinian Bantustans – Obama should press him on Palestinian rights.

Israel’s two-tier legal structure in the occupied West Bank, and increasingly for Palestinian residents of occupied East Jerusalem, is unacceptable in the 21st century.  Demolishing the homes of East Jerusalem residents whose children allegedly carry out attacks is collective punishment. Meting out such treatment against Palestinians, while the police-identified murderers who burned Mohammed Abu Khdeir alive face no danger of their family homes being demolished, is a clear double standard. Jewish Israelis simply are not subject to the same extreme punishments as Palestinians.

There is no real doubt that Israel’s new law mandating at least four years prison for dangerous rock throwing will be applied to Palestinians while Jewish settlers will not face the same consequences.  As with some home demolitions, collective punishment will be a part of the law against stone-throwing children.  Parents of such children will not be eligible to receive health benefits while the child is serving out his or her sentence.

Whether Netanyahu accepts one state or two, he cannot be allowed to rule over such an openly bigoted legal system while on the dime of the U.S. taxpayer.  That the U.S. Congress is now preparing to increase military aid to an occupying power should give pause to the activist base of the Democratic party. Indeed, polls we have received here in the Knesset indicate African Americans, young people, and progressive Democrats are raising real concerns about Israel’s policies that too often resemble those of the Jim Crow South and out-of-control American police forces that adhere to one set of practices for whites and another for African Americans.  And just as Americans, eventually, rightly took nonviolent action against those racist policies, so too are we pursuing boycott of the occupation and settlements to secure Palestinian freedom and equal rights via a powerful international movement that recognizes it is wrong to subjugate and dispossess Palestinians. Opposition to Boycott, Divestment, and Sanctions is misplaced and hypocritical.

President Obama is down to his final 14 months in office.  Any goodwill he may harbor toward the Palestinian people for their freedom is stymied by a recalcitrant Netanyahu.  Consequently, the two-state solution is likely to die on his watch precisely because Netanyahu clings tenaciously to a right-wing religious nationalism determined to expand on occupied Palestinian territory.  Instead, Obama should salvage what he can for Palestinians by speaking out forcefully against Israeli laws – and currently proposed legislation – that plainly are discriminatory.

Obama cannot bequeath a two-state solution to his successor, and likely cannot even get a promising process underway, but he can set a precedent for forthright talk from a sitting American president about how Israel’s anti-Palestinian discrimination and seemingly permanent subjugation of Palestinians is at odds with the American vision for the region.  He should use the bully pulpit for all it’s worth and decry Israeli apartheid in the occupied territories.

It will be tragic if the next American president cannot bring himself or herself to acknowledge that occupation and anti-Palestinian discrimination are central to this conflict. With freedom and rights, Palestinian frustration would obviously dissipate.