"You can’t force people to quit using drugs": The surging debate over whether you can make heroin addicts go clean

Forced treatment is being proposed as a solution to the opioid crisis. But there are some very real dangers 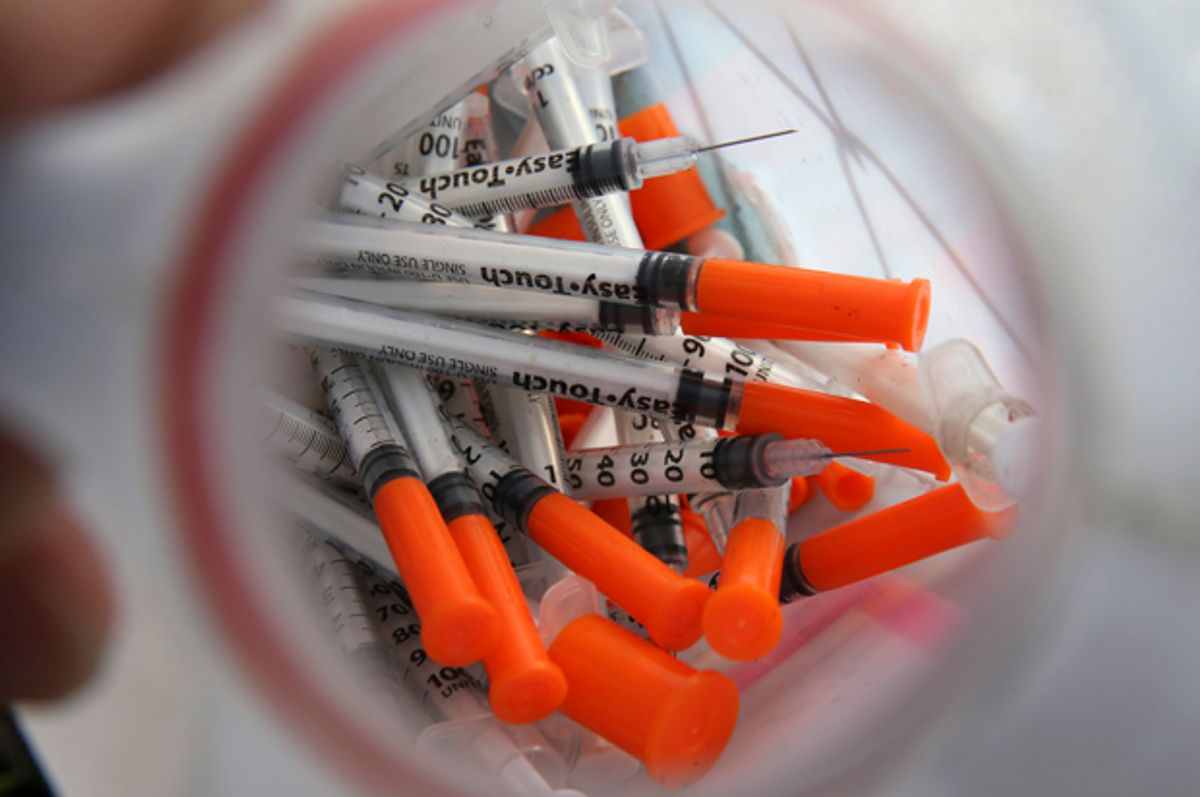 Confronting an opioid crisis that has already claimed hundreds of Massachusetts lives this year, Gov. Charlie Baker has proposed legislation that would allow doctors and other medical professionals to hold addicts against their will for three days. Critics warn that the measure lacks evidence to support it, would violate civil liberties, and could even scare users away from seeking needed medical attention.

"The governor's proposal is so radical I don't think there's any research specific on it, because nothing like this has ever been done," says Bill Piper, director of national affairs at the Drug Policy Alliance. "We do know that treatment is generally more effective when it's voluntary. You can't force people to quit using drugs. It just doesn't work."

Gov. Baker, whose office did not respond to interview requests, has said that the crisis demands bold solutions. The legislation, which was introduced on October 15, "makes important changes to the way that we deal with people who suffer the most severe forms of substance use disorder, those for whom other forms of treatment have failed and who may only be treated on a compulsory basis," he wrote.

Civil commitment for addicts who pose a danger to themselves or others already exists in Massachusetts and other states. Currently, state law allows for certain people, including family members, police officers and doctors, to petition a court to have an addict committed for as long as 90 days. As of mid-September, about 3,250 people had been committed this year, according to the Boston Globe.

But the governor's proposal, which also includes other measures like increased oversight of prescription opioids, would mark a major shift. Instead of a doctor or family member being required to petition a court to have an addict committed, medical professionals would receive the power to unilaterally impose a three-day commitment. The burden would then be on the drug user to object to that initial three-day confinement in court. After that, family members or a doctor could petition for the commitment of as long as 90 days.

Civil commitment holds clear appeal for family members of an addict whose life appears to be spinning out of control toward a possible fatal overdose. But do such commitments do any proven good?

The research on compulsory treatment is inconclusive and often methodologically weak, says Karen Urbanoski, a scientist at the Center for Addictions Research of British Columbia and an assistant professor public health at the University of Victoria. Urbanoski says that without evidence as to its effectiveness—and, if so, under what conditions —such drastic measures may not be justified.

"If it is simply a punishment, we are not on good ethical ground to be doing this," says Urbanoski.

Dr. Sarah Wakeman, medical director for Massachusetts General Hospital’s Substance Use Disorder Initiative, agrees that the research is mixed, and that good studies are lacking. She also shares concerns about the lack of treatment beds, and the possibility of scaring users from seeking medical attention. But she says that holding someone for 72-hours will help "save lives" and allow for doctors to help develop a long-term treatment plan that is voluntary.

"The goal of this legislation is to allow physicians to treat patients with addiction the same way that we would treat anyone with a life threatening illness who is unable to take care of themselves," says Wakeman, who served on the governor's Opioid Working Group.

Whitney Taylor, political director of the Massachusetts ACLU, worries that it might "backfire and increase overdoses" if people are shunted out to the street with no support after being held for 72 hours.

"I appreciate the rhetoric changing, and that people are now talking about treatment instead of incarceration," says Taylor, who has a long history working in needle exchanges. Civilly committing someone, after all, is a form of incarceration, and she worries that "we're just kind of tweaking the drug war and dressing it up to look nice."

There is a lack of consensus not only that civil commitment works but also over the state of existing research. Laura Schmidt, a professor of health policy in the School of Medicine at the University of California at San Francisco, says that "the literature suggests that people who are coerced into treatment do just as well as people who go voluntarily."

But Schmidt says that expanding woefully insufficient treatment beds, increasing access to little-prescribed but very promising new medications, and putting the overdose-reversing drug naloxone into the hands of every heroin user are critical first steps.

"The number one issue from where I sit is the lack of available treatment slots and beds, and it's a massive national problem," says Schmidt. "We call it the treatment gap...what you will find is that we are able to serve 10-percent of the people."

Civil commitment is a tough call. On the one hand, she says, forced treatment is no doubt better than jail, where addicts often end up. At the same time, it is hard to justify such drastic measures when so many basic measures to combat overdoses and addiction have not been accomplished.

"Well, if you look at the alternative, this may not be so bad," says Schmidt. "But on the other hand, if you're going to make a massive deprivation of liberty, have you tried everything else?"

In Massachusetts, wait times for residential treatment averaged 23 days in 2014, according to WBUR.

One glaring weakness in the state system is the failure to provide treatment to many prisoners, addicts who often need it most. 80 percent of prisoners in Massachusetts report substance abuse issues when they are admitted but just about 5 percent of state beds are dedicated to treatment, says Leslie Walker, executive director of Boston-based Prisoners' Legal Services.

"There are long waiting lists and some people can be on waiting lists for years," says Walker. "There is absolutely no guarantee that you will ever get treatment."

In addition, she says, prisoners in segregation and high security units are denied treatment.

"Under the current statute if a suitable facility is not available...then women can be sent to MCI-Framingham and men can be sent to Bridgewater," says Massachusetts ACLU attorney Jessie Rossman. "They're both prisons."

Though addicts are mostly kept separate from the general population, the environment is still thoroughly carceral, says Rossman. Women are subject to the count, must see their families in the prison visiting room, and are denied access to medication like Suboxone, she says.

They are also denied access to 12-step programs like Narcotics Anonymous, she says, that are available to the general population.

The proposal is being touted as part of a broader shift, approaching addiction as a public health crisis instead of a problem to be solved by law enforcement. Naloxone, the overdose-reversing drug, is being supplied to many first-responders and so-called Good Samaritan laws passing nationwide offer drug users calling 911 for a companion in crisis limited protection from prosecution.

But critics say that coercing people to receive treatment is a troubling combination of the two models.

"People who use drugs will not seek medical help if it is going to lead to a 72-hour commitment followed by long-term residential treatment," says Piper, which is "basically incarceration."

"I understand that the civil liberties argument is difficult for some people to get to because they may be watching a loved one suffer, or harm themselves, or be out of control," says Taylor. "We're talking about people where their only crime is ingesting a drug that the government doesn't approve of—then that is a civil liberties issue."

Baker's proposal would stop sending women to prison for treatment. But the proposal is silent on male addicts, some of whom are currently sent to the state prison at Bridgewater. That the state is only making changes for women—the issue that they are being sued over—raises questions as to how serious the governor is about sufficiently expanding treatment to meet the demand. More broadly, it raises the question as to whether the American drug policy consensus, despite recent shifts toward public health, continues to embrace law-and-order at the expense of harm reduction.

"I think what we're seeing is also a bit of ideology at play about the appropriate ways that a society can respond to the real harms they are seeing about alcohol, and drug harms and addiction," she says.

Portugal, for example, decriminalized drug use in 2001. New HIV infections amongst drug users have fallen, and harmful synthetic drugs like "bath salts" and synthetic cannabinoids are relatively scarce, according to the Washington Post. More to the point, overdose deaths in Portugal are the second lowest of any country in the European Union, though many factors are at play and it is hard to draw a direct line between decriminalization and that outcome.

The opioid crisis requires a dramatic response. The Massachusetts debate reflects the uncertainties over what kind of response is humane, effective and even politically imaginable. In the United States, we are still considering a very limited set of solutions.