Last night, a black lawyer is not hired into Diane's firm—but she is subjected to Diane's clumsy attempts to relate 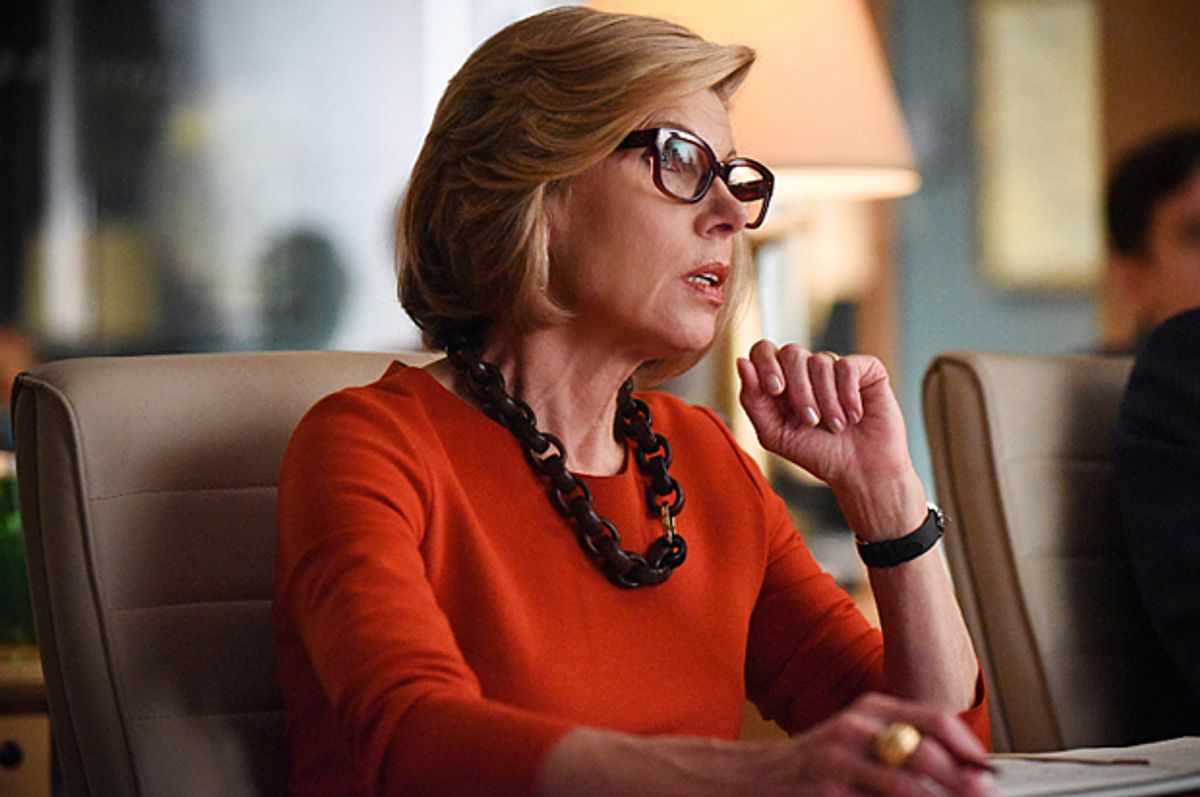 There is a system of rules and accepted behaviors that governs the processes of the entire planet and yet is rarely acknowledged. It’s a dress code, a day-to-day ethic, a grammar of speaking and being; it’s corporate culture, and whether or not we want it to, it runs the world. You either learn how to use it, or you learn to let it use you; and even if you opt out, most of the institutions that run the planet operate under its guidance.

One of the reasons “The Good Wife” has become such a captivating show for critics and fans alike is because in a television landscape glutted with workplace dramas, “The Good Wife” actively engages with the bizarre convolutions of corporate culture. There’s something immediately recognizable about the characters’ attempts to navigate asking for raises, angling for promotions, or struggle through working with someone they really don’t like. The court proceedings of “The Good Wife” are unlike any other show on television, because the judges and opposing lawyers are recurring characters—colleagues in their own right, even as they’re rivals on the floor. “The Good Wife”’s finest season, its fifth, revolved around emotionally fraught corporate shuffling, as a few lawyers left one firm to start another.

And last night’s episode, “Lies,” offered another revealing, incisive little gem, one that really had no reason to be in the season’s storyline except that it interested the show’s writing team. In it, firm partners Diane Lockhart (Christine Baranski), Cary Agos (Matt Czuchry), David Lee (Zach Grenier), and Howard Lyman (Jerry Adler) are tasked with hiring three new associates. Most of the candidates are white men from top-tier law schools—Harvard, Stanford, Yale. One is a black woman named Monica Timmons (Nikki M. James), and though we know the partners best, we experience the interview process through her eyes. One of the ways “The Good Wife” digs into corporate culture is with clever and insightful perspective-switching, and this is no exception; there is no area of work that feels most fraught with unspoken expectations and well-established norms than the job interview.

Monica is perfectly prepared. She looks appropriate, is extremely polite, and arrived early; she spots the other interviewees —white men—and tries not to let the competition get to her. Her resume, like the other applicants’, is on off-white, heavyweight paper, with a font to set off her name that is pretty but not distracting. And she is doomed from the moment she walks through that door.

Exactly why she is doomed is open to interpretation. The titular “Lies” of the episode directly refer to another plot about an employee being subjected to a polygraph test, but given that this interviewing plot is in this episode, the title takes on greater significance. The interview process itself is what seems to be the bigger lie, as Monica steps from office to office, going through an hours-long gauntlet of interviewers with partners who alternate between tone-deaf, rude, and irritatingly condescending. Howard asks her if she’s “Nigerian, or what?” and then praises her for being “sassy.” Diane and Cary both individually ask her if growing up in Baltimore was “tough,” presumably because they have seen “The Wire.” David Lee is unimpressed with her alma mater—Loyola—and doesn’t bother hiding it. It is a demoralizing series of meetings, one where every interviewer brings their preconceived notions to the forefront.

For the viewer, what follows is even more uncomfortable: the meeting where the partners discuss their findings. The episode uses the four partners to stake out four different corporate reactions to an atypical applicant: David Lee insists on choosing the best for the job, Diane wants to make a diversity hire without saying “diversity hire,” Cary likes the guys he can identify with, and Howard Lyman thinks they should hire “the black girl.”

The following conversation is a human resources department’s worst nightmare, as the four try to come to a consensus. Hiring to promote diversity is a shell game with no easy solution—I’ve written about it before. And at least partly, that’s because it’s hard to say what needs to be said without making even more of a mess of things. Diane plays the show’s resident party-line liberal, and she articulates the conundrum of her own top-down progressivism: The firm does not discriminate, positively or negatively, based on race, but Monica’s race is the key feature that sets her apart; it is the characteristic that adds complexity to her Loyola attendance and Baltimore upbringing, that makes her an individual with a story instead of a piece of paper with varying fonts. Diane, as the most well-meaning partner, is stuck in a position of authority that can’t justify the “right” decision. And so Monica does not get the job.

“The Good Wife” is kind of ruthless with hiring storylines. In a season three episode, “Marthas And Caitlins,” protagonist Alicia (Julianna Margulies) is asked to choose between two candidates that remind her of different aspects of herself, before being forced to choose the candidate that has a personal connection to one of the partners. It’s an unfair choice, and everyone—Martha, Caitlin, and Alicia herself—knows it. But, the episode observes, that’s how the world works; a choice has to be made, and what goes into the choice is often unpleasantly arbitrary.

In “Lies,” the odds are not in Monica’s favor, and that is, in itself, another installment of unpleasant, behind-the-scenes choice-making. What makes the situation in “The Good Wife” singular is that it addresses not just the duplicity of the job application process—a “meritocratic process” that, unchecked, favors wealthy white men—but also Diane’s guilt for failing to help Monica. Diane calls her in to deliver the rejection to her face, thinking of it, perhaps, as a gesture of respect. Monica sees it as a condescending waste of her time. “You brought me in here to say you want to help me, but not give me a job. Okay. This was most illuminating.” Diane is flummoxed at the anger she seems to have sparked for Monica, and is disturbed, then, when Monica releases an “undercover video” from her interviews that splices together all the worst things the interviewers said, which makes the firm look very tone-deaf, indeed. The video is the weakest part of the narrative—a symptom of “The Good Wife”’s obsession with surveillance and technology that ignores some questions like, where the hell was her hidden camera? And does making an undercover video really lead a partner to change their mind about an applicant?—but it serves to give Diane and Monica one final scene together.

Guilt is a transformed and misplaced type of anger, and in Diane’s case, it comes from a perch very high above Monica’s; the top-name partner in the firm that just rejected her. Monica reflects it back to her as anger, and it’s a moment of revelation for Diane, who is the character the audience knows best. All Diane is seeing in Monica is a reflection of what she wants to see, and her guilt has her bringing back Monica again and again, as if to attempt once more to peer into that confusing mirror. Diane struggled to become a name partner, as the only woman in the firm, and as she communicates to Monica, she empathizes. “Everyone has to eat dirt on the way up,” she says.

Monica, who is expecting a job offer after successfully getting Diane’s attention once more, is once again furious. “There is no comparison,” she says, between Diane’s difficult choices to get ahead and the discrimination she faces. “I don’t choose to have women hold their purses tighter when they see me coming down the street. I don’t choose to have cops pull me out of my car and frisk me for failing to signal…. I don’t want your understanding. I don’t need your advice. What I need is a job.”

And with that, she stands up and walks out.

This season, “The Good Wife” hasn’t always been able to find that corporate culture sweet spot—partly because protagonist Alicia has split from all the other regular characters, and partly because the firm shuffling and reshuffling has been very hard to follow. There’s an extensive political subplot about Alicia’s husband Peter (Chris Noth) running for president on the Democratic ticket, and last night’s “Lies”’ reintroduced the NSA flacks that were bizarre but beloved characters in season five. Even this storyline, with Monica’s job interview, has its odd hiccups.

But Monica herself, as a marginalized outsider frustrated with the characters of the show, is an incredible character in both conception and execution. “The Good Wife” explores power, morality, and gender throughout its long 22-episode seasons—and has at times failed to tell stories about race well, especially as regular characters of color faded from the show’s storytelling. There’s a sense in which Monica is holding Lockhart, Agos & Leeto accountable, and there’s also a sense to which she’s holding the show as a whole to account—for losing Archie Panjabi’s Kalinda Sharma, for distancing the storylines of characters of color like Matan Brody, Geneva Pine, Wendy Scott-Carr, and Lemond Bishop, and for struggling with their own top-down guilt and confusion about how to incorporate employees of color into their workplace. It’s clearly important, but characters like Diane lack a roadmap, and as a result, they don’t help—they just make people like Monica very angry.

As the episode identifies, through Monica, the problem with well-meaning guilt—white, liberal, privileged, or otherwise—is that it puts that misplaced anger on the marginalized group, instead of where it belongs: on the very person feeling that guilt. It's hard to hold yourself accountable for the injustices in the world, as Diane realizes. But it would also have been more responsible of her to acknowledge her own blame and recommend Monica to another firm than it is to drag her in for another round of soul-searching. The guilt is useful in that it indicates to Diane that something is wrong, but instead of either owning it or doing something about it, she tries to absolve herself to Monica. And Monica—a one-off character who we might never see again, though who knows, with "The Good Wife"—is there to give her the lowdown: If you're going to play the game of corporate culture, there is no absolution. There's just making choices, again and again.