Ben Carson has had a very bad week. Here's what we've learned, and here's what it says about modern Republicans 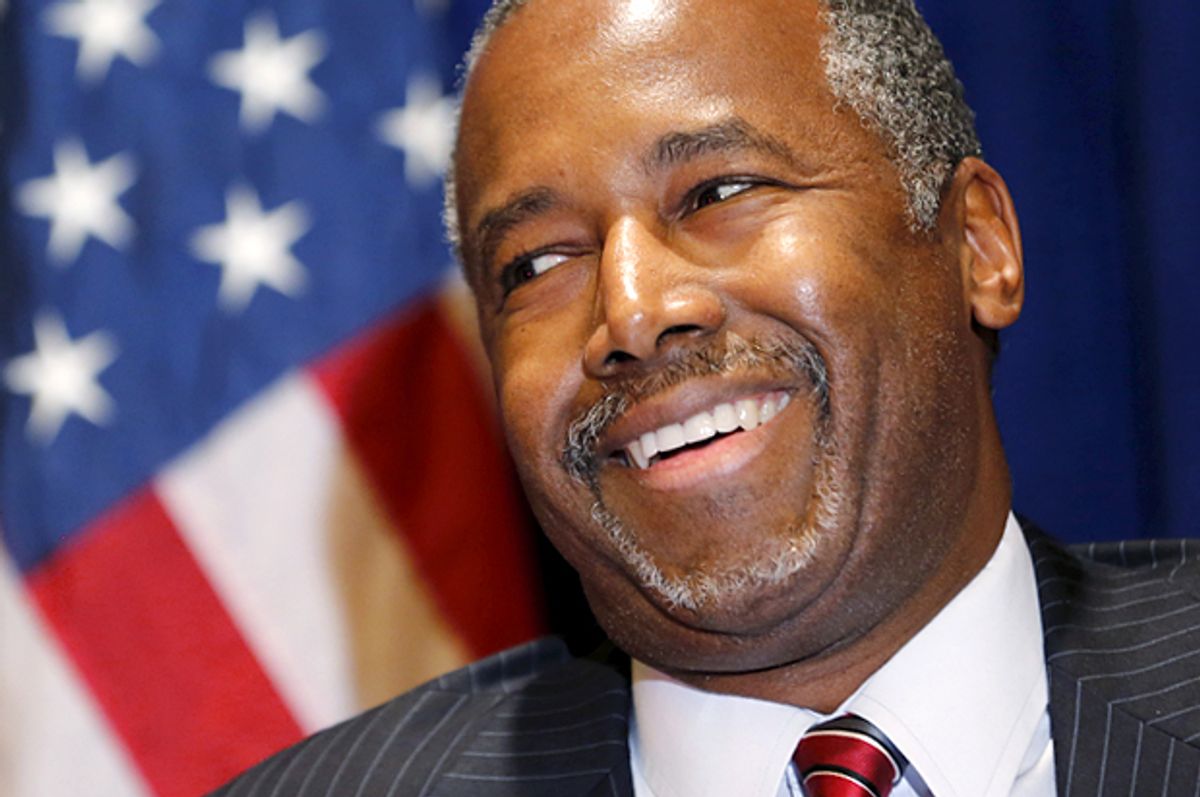 Last week was pretty tough for Ben Carson. From BuzzFeed unearthing a video of him claiming that the Egyptian pyramids were built by Joseph to Politico reporting that he had lied in his autobiography about being offered a scholarship from West Point to another imaginary college anecdote reported by the Wall Street Journal -- it's looking more and more like Carson’s personal history is built on a pyramid of creative fabrications. The retired neurosurgeon, who is now ahead of Donald Trump in some polls, has been proving to the world over the past few months that you can be absolutely brilliant in one field, and incredibly ignorant in another. Now he's proving that you can be one of the most admired people in society and also a pathological liar.

Carson has reacted predictably to this onslaught by claiming that the “liberal media” is out to get him and that there is some kind of conspiracy to destroy his campaign because those evil lefties don’t like a black conservative.

(He continues to insist that Obama didn’t experience any of this vetting when he first ran; I suppose he was stuck in the surgery room throughout 2008.)

While blaming the “liberal media” is the most effective tactic in dodging any and all criticisms, Carson has introduced a new favorite pejorative term for those he does not like: “secular progressives.” (The word "progressive" is bad enough in conservative circles, but "secular"!) By this he most certainly means heathen atheists who want to destroy his faith with facts, and gay people, doing the work of Satan himself.

And yet it is ironic to hear someone profess great admiration for the founding fathers while using the word "secular" as if it were a slur. Carson is revealing himself to be a bit dense when it comes to American history, as the Wall Street Journal (which is hardly a “secular progressive” publication) pointed out last week after Carson wrote on Facebook:  “Every signer of the Declaration of Independence had no elected office experience...What they had was a deep belief that freedom is a gift from God.” This is, of course, completely false. Thomas Jefferson, Samuel Adams and many other signers had elected experience in colonial assemblies.

To be fair, Carson is hardly the only GOP candidate who has patently false notions about the founding fathers; Sen. Rand Paul, R-Ky., is notorious for using fake quotes from Thomas Jefferson, James Madison and other historical figures to fit his agenda.  What seems to be the most popular misconception about the founding fathers on the right is that they were all dedicated Christians like Carson who believed that religion had a part to play in the government. Carson uses “secular” as an insult, yet some of the most adored founders were secular deists, who despised and feared theocracy.

Indeed, Thomas Jefferson, who is a hero to many on the right -- including Ben Carson, who misquoted him on gun control last month --  was one of the most free-thinking of all the founding fathers, and feared zealots like Carson. “Millions of innocent men, women and children since the introduction of Christianity have been burnt, tortured, fined, imprisoned,” wrote the third president of the United States, who is considered by most to have been a deist, in his Notes on Virginia (1781), “Yet have we not advanced one inch towards uniformity. What has been the effect of coercion? To make one half the world fools and the other half hypocrites. To support roguery and error all over the earth.”

Deism, which was the most common belief among enlightenment intellectuals at the time (as agnosticism and atheism are today), is the notion that, while there is some kind of creator, it does not interact with the world or intervene in any human affairs. Deism rejected organized religion and Christian mythology; as Thomas Paine wrote in his essay "Of the Religion of Deism Compared With the Christian Religion":

“The Deist needs none of those tricks and shows called miracles to confirm his faith, for what can be a greater miracle than the creation itself, and his own existence?”

(This sounds very much like Richard Dawkins today discussing the “magic of reality.”)

It should be noted that this was all before the discovery of evolution, relativity and countless other scientific findings. If Jefferson or Paine were alive today, in light of everything we have learned about the universe and the human species, they would most likely be agnostic or atheist. As Jefferson wrote toward the end of his life in a letter to John Adams:  “The day will come when the mystical generation of Jesus, by the Supreme Being as his father, in the womb of a virgin, will be classed with the fable of the generation of Minerva in the brain of Jupiter.” This quote alone reveals how skeptical Jefferson was about religion and any kind of mythology.

Other founding fathers were either deists or moderate Christians (it should be recalled that the founders were elitists who had been greatly influenced by enlightenment thinkers, and that the majority of Americans -- mostly uneducated -- were at this time dedicated Christians). George Washington was probably a Christian (though some believe he was also a deist),  but he was certainly no Bible-thumper, and his church attendance was sporadic throughout his life. John Adams was a member of Unitarianism, which rejects the trinity and believes that Jesus was a human being, not the direct son of God. The first secretary of Treasury, Alexander Hamilton, was perhaps one of the most pious of the founding fathers, but even his faith ebbed and flowed throughout his life.

Whatever their personal beliefs, we can be sure that among the founders there was a strong consensus that the state and church should remain separate, i.e., the state should be secular. The establishment clause, which was based on the Virginia Statute for Religious Freedom -- drafted by Jefferson in 1777 -- was included to ensure the people of all faiths had the freedom to practice their religion privately, but also to prevent the state from passing a “law respecting an establishment of religion.” It is quite clear that the framers wanted to keep religion in the private sphere, away from the state.

And yet, Dr. Carson seems to believe that the separation of church and state is pure nonsense; indeed, he has pointed out that God is mentioned in our Pledge of Allegiance and on our money, proving (in his mind) that secularism is simply a form of schizophrenia.

“So, if it’s in our founding documents, it’s in our pledge, it’s in our courts and it’s on our money, but we’re not supposed to talk about it, what in the world is that?” said Carson to a crowd at the Iowa state fair in August. “In medicine we call it schizophrenia, a form of craziness.”

Once again Carson’s lack of historical knowledge is showing. “In God We Trust,” which appears on our currency, was adopted in 1956 under Eisenhower, and the phrase “under God” was added to the Pledge of Allegiance in 1954. As for our founding documents, he is obviously pointing to the Declaration of Independence, which states that “all men are created equal, [and] are endowed by their Creator with certain unalienable Rights,” as well as the phrase “Nature's God” in the opening paragraph. The Declaration of Independence was written by Jefferson, who, as noted above, was a deist, which explain’s the phrase “Nature’s God.” The word "creator" can obviously mean anything, but Jefferson no doubt meant it as a deist creator, i.e., nature, or a hands-off God (note again, this was before Darwin discovered evolution, which would have surely tested Jefferson’s belief in any kind of creator).

To say that America was founded as a “Christian nation” is to completely misunderstand the founding fathers and distort their beliefs and ideas. Conservatives like Carson like to paint the founders as if they were evangelical zealots like themselves, instead of the secularists that they actually were. So when Carson uses the term “secular progressives” as an insult, he is unwittingly revealing how antithetical his ideology is to that of the founders; those whom he constantly praises and claims to admire.