Marco Rubio coasts, with a big assist from the moderators: He "won" the GOP debate by evading scrutiny

In the fourth GOP 2016 debate, Rubio got to play tee ball, Rand did well, and Jeb wasn't entirely embarrassing 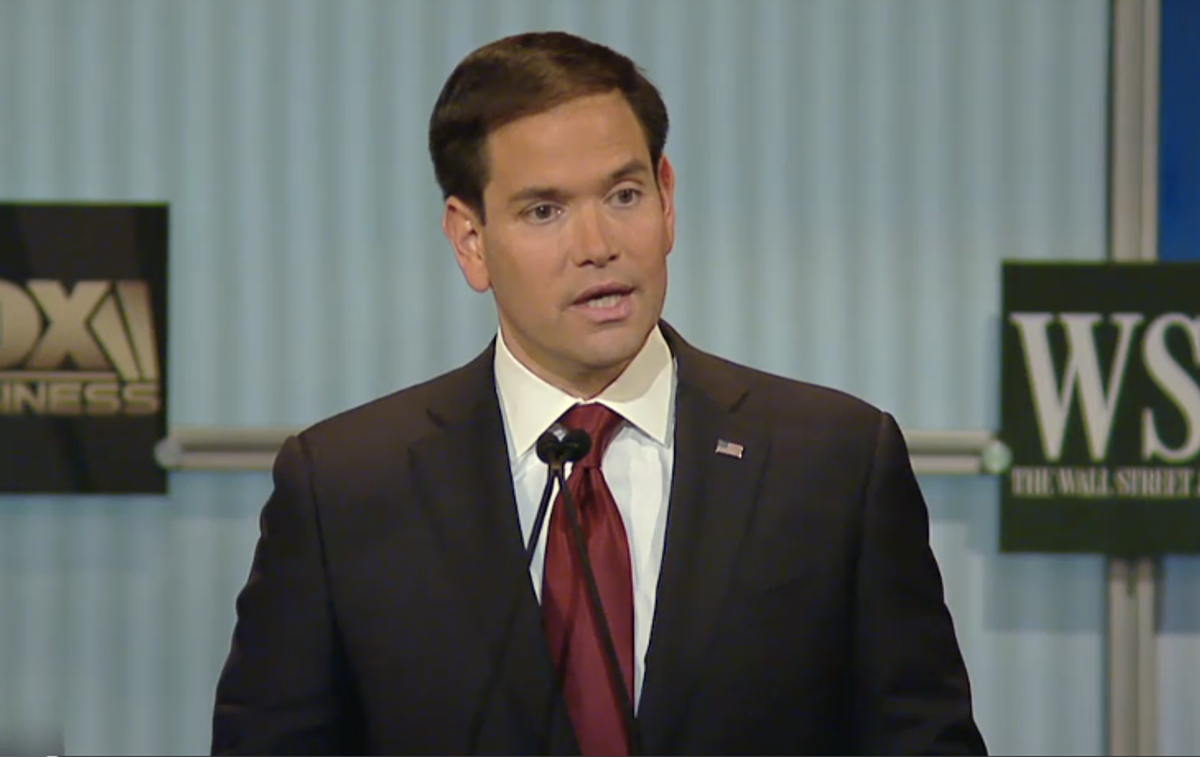 Another Republican debate is in the books, and once again the consensus emerging from the pundits and reporters is that Florida senator Marco Rubio was the big winner of the evening. I don’t really agree with that assessment, but I can see how one would come to that conclusion. Rubio had an easy night. He coasted through the entire debate with really only one bumpy patch. And he was abetted in this untroubled journey by the Fox Business moderators, who made it their business to make sure Rubio didn’t face too much difficult questioning.

Going into the debate, the expectation was the Rubio – who is rising in the polls and emerging as something of a soft consensus candidate for the Republican establishment – would face the harsher scrutiny that comes with being a frontrunner. But that’s not what happened. The questions directed at Rubio by the moderators were invitations for him to launch into his talking points. Wall Street Journal editor-in-chief asked Rubio how, in an economy that is “undergoing transformation,” would he “reassure American workers that their jobs are not steadily replaced by machines.” Rubio recited the “21st century economy” portion of his stump speech. Maria Bartiromo teed up a question about Hillary Clinton’s resume and asked Rubio how he’ll beat her even though she’s been in politics so long. Rubio chuckled at the question (as he should have) and launched into the “this election is about the future” portion of his stump speech.

And then there were the questions Rubio wasn’t asked. Donald Trump was interrogated about his position on immigration, but Rubio – whose immigration apostasies have caused him trouble with conservatives – was not. Ted Cruz was pressed repeatedly on how he’d pay for his package of tax cuts, but Rubio – whose tax plan costs far more than Cruz’s – was not.

The only tough question Rubio fielded dealt with his proposal to expand the child tax credit, which Baker cast as “another expensive entitlement program to an already overburdened federal budget.” Rubio dodged the question entirely, saying that he loves families and is proud to have a pro-family tax plan. Hooray families! He likely would have gotten away with that had Rand Paul not jumped in and pointed out that Rubio’s expansion of the tax credit exists alongside his massive expansion of military spending, which isn’t very “conservative.” Paul had him dead to rights, but Rubio blustered his way out, calling Paul an “isolationist” and declaring “we can’t even have an economy if we’re not safe.” Rubio came nowhere close to answering Baker’s question or Paul’s challenge, and no one bothered to follow up and ask how Rubio would pay for new tax credits, pay for the military spending, pay for the tax cuts, and reduce the national debt he’s so worried about. It’s a massive contradiction at the heart of Rubio’s candidacy, but, in keeping with the evening’s theme, everyone just let it slide.

Speaking of Rand Paul, I thought he had a pretty good night! The Rubio challenge was strong, he was more assertive than he has been in past debates, he pushed back effectively on the belligerent posturing of the other candidates towards Russia, and he even got in a good dig at Donald Trump for not realizing that China is not part of the Trans-Pacific Partnership. He had an awful answer on climate change and his tax policy remains hot garbage, but he did a much better job making the weird crossover libertarian pitch than he has previously.

I thought Jeb Bush did okay too. Actually, wait, let me recalibrate that. Jeb was… not as bad as we were expecting? I guess? He wasn’t “good,” but he didn’t make the mistake of trying to be the vicious attack dog that he isn’t. And he made a coherent pitch for immigration reform in response to Trump’s “deport ‘em all” nonsense. But, of course, he’s still the same Jeb who can’t seem to figure out how to say words properly in public. “I was in Washington, Iowa, talking about how bad Washington, DC is,” he said at one point, attempting a joke and then flailing his hands about to impel the audience to understand and laugh at the humor of two different places having the same name. No one laughed, so he dropped an awkward “anyway” and moved on. That’s the worst thing he did, so Jeb’s people are probably pleased.

Ted Cruz also had an okay night, largely because he got the scrutiny and pressure everyone thought Rubio would be in for. He was the only candidate who was pressed on how he’d pay for his tax cuts (the black magic of “dynamic scoring” was his answer). He was asked repeatedly by Neil Cavuto whether he’d let a big bank like Bank of America fail in a financial crisis (Cruz said “yes,” and then clarified that he’d have the Fed step in and prop up the failing bank with a high-interest loan). He announced that he’d eliminate five government agencies, and then named four: the IRS, the Commerce Department, the Energy Department, the Commerce Department (again), and HUD.

As for the rest, there was nothing you haven’t seen or wouldn’t have expected. Ben Carson was completely incoherent for most of the night and was utterly lost on economic policy. Donald Trump offered his increasingly stale set of promises about lending America some of his own personal greatness. Carly Fiorina reiterated her dislike of socialism and said the Consumer Financial Protection Bureau is how the Red Menace will take hold in America. John Kasich was loud and forgettable, and at one point counseled that “we have to be responsible about what we propose on the tax side,” which was tantamount to disqualifying himself.

And, of course, we have to carve out a special mention for New Jersey governor Chris Christie, who was sadly bumped from the primetime debate and didn't get his chance to yell at Rand Paul last night. It was an embarrassing setback for the governor, but don't you worry: the Christie Comeback is still in effect.