The fourth Republican debate was a tepid, unsurprising affair that mostly just confirmed what we already knew 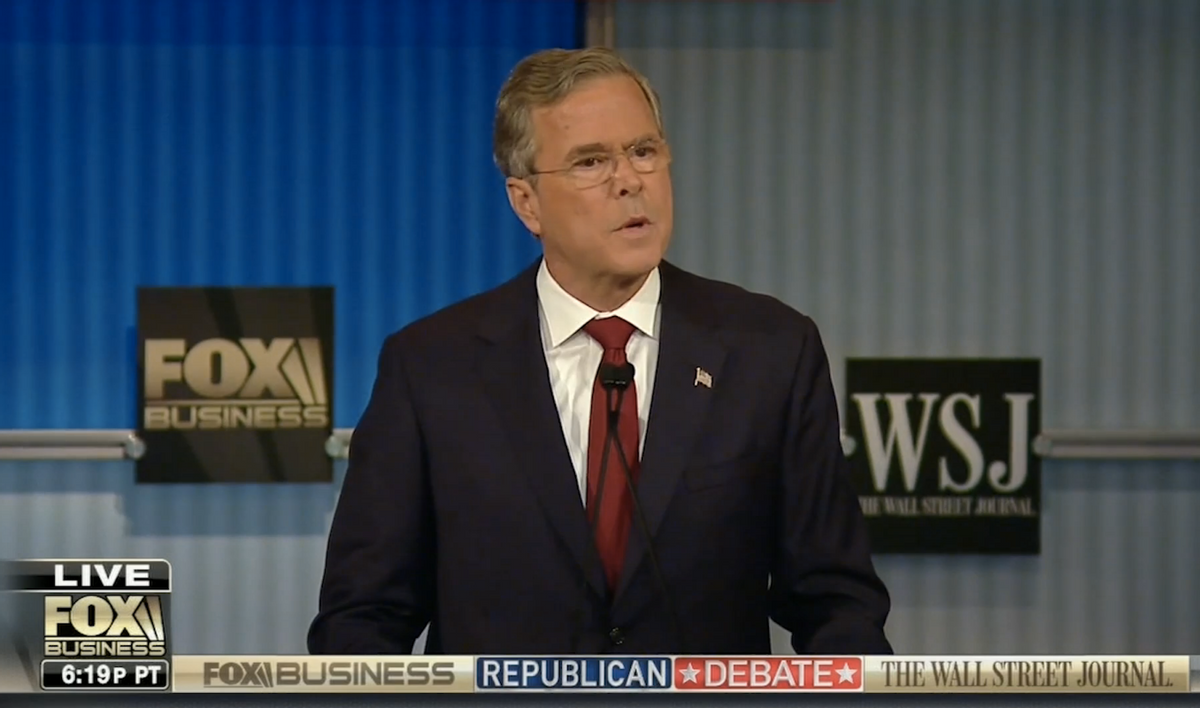 Is anyone else beginning to tire of these Republican debates? Tuesday's bout on Fox Business was only the fourth one so far in the 2016 cycle, but already the candidates' tics have become thuddingly repetitive: John Kasich gives off a Willy Loman-esque air of depressive bombast. Carly Fiorina reels off her catchphrases like she's been put through "Manchurian Candidate"-style programming. Ted Cruz emotes theatrically like a cross between a fundamentalist Laurence Olivier knockoff and a shady country lawyer. Marco Rubio delivers his stump speech like the keynote speaker at a self-help seminar. Donald Trump oozes like a lounge lizard with rage issues. Rand Paul is in another world. Ben Carson just manages to put sentences together. And Jeb Bush—well, Jeb Bush does his Jeb Bush thing.

Poor Jeb. While everyone else on the stage was interrupting each other at will and rambling away to their heart's content, Jeb waited patiently until he was called, answered politely and shut up again. He got some more applause than usual, but he is hopelessly lost out there.

He should have looked around and tried to do what his colleagues were doing, which is spout a load of gobbledygook loudly enough to get the audience going. Standard Republican economic policy makes regular incoherence look like Shakespeare, so it was no surprise that much of the discussion veered wildly off into nonsense territory, a jumble of random words like "taxes" and "entrepreneurs" strung shakily together. From the beginning of the debate, when Trump loudly declared that wages are "too high" in America, to the end, when Rubio said that over-regulation, rather than a total gutting of regulations, was to blame for the banking crisis, there was barely a second when anything approaching reason was present. There was even enough time for a bizarre anti-philosopher thread to develop, as person after person tried to bash philosophers more than the last. (What in the world did philosophers do to these folks?)

The entirely random foreign policy conversation that popped up in the middle of the debate was, if anything, even more ridiculous. Take a look at this Ben Carson answer about the Middle East and tell me if you can understand what he's saying.

The candidates got much more time to talk at this debate for a couple of reasons: there weren't as many of them, Chris Christie and Mike Huckabee having been demoted; and the Fox Business moderators seemed content to let them do whatever they wanted. This being a Fox production, it all sort of worked in a surreal kind of way, with the exception of the poor bell which was supposed to cut people off. The candidates ignored it so much that by the end its pinging had taken on an almost plaintive air of defeat. Rather than bow to its will, the people on stage barrelled right through, batting away the moderators' attempts to reel them in. Possibly because of this—and also because this is Fox we're talking about—there were none of the media-bashing blowups that occurred at the infamous CNBC session. The moderators, when they managed to insert themselves at all, were...fine, with Wall Street Journal editor Gerry Baker turning out to be a surprisingly shrewd and substantive interrogator. They could have nailed the candidates more on the many, many whoppers they were telling, but it's futile to expect too much in that department.

As for that big question, who won? Who knows, really? This was the first debate that felt like a holding pattern, where the trends we've been seeing develop—the fall of Bush, the rise of Rubio and Cruz, the fading of Trump—seemed to be hardening into more certain realities. There are still months and months and debate after debate after debate to go, of course, so there's plenty of time for everything I've just said to be proven completely wrong. I'm willing to stake a lot, though, on the prediction that these debates will descend even deeper into nightmare territory.