The GOP's pathological militarism: These dangerous neocons belong nowhere near the White House

Last night's debate showcased a party that's learned nothing from the failures of U.S. foreign policy 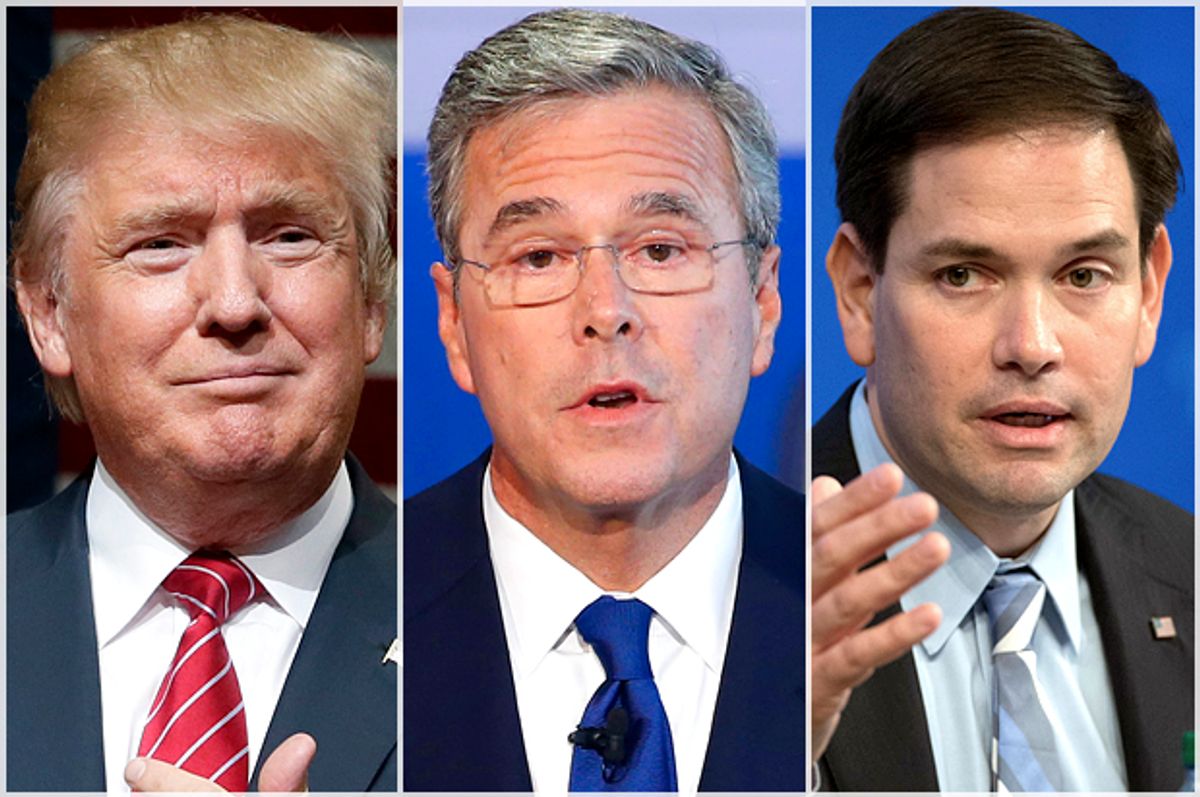 “We are forever the United States of Amnesia. We learn nothing because we remember nothing.” – Gore Vidal

A lot of attention is paid to the regressive social policies of the Republican Party. And that’s certainly justified: The GOP continues to wage a pointless culture war that was lost decades ago. Whether it’s same-sex marriage or equal pay or drug laws or the right of women to control their own bodies, Republicans are out of step with most of the country.

But what doesn’t get discussed enough is their pathological militarism and their historical amnesia. In debate after debate, Republican presidential candidates speak as though the last fifteen years never happened. We’re still mired in two quagmires in the Middle East, one of which is largely responsible for creating the menace that is ISIS, and none of them, with the exception of Rand Paul, appears to have learned anything from our mistakes.

At the last Republican presidential debate in Milwaukee, you heard almost everyone on stage competing to out-hawk one another. Trump bragged about how “militaristic” he is. (Although, to Trump’s credit, he acknowledged our foolhardiness in waging war in Iraq.) Carson wants more troops in Syria and Iraq and so we can “take their energy field” and “all of that land from them.”

Jeb Bush thinks the “lesson of history” is that America has to “exercise leadership” (read: intervene) in the Middle East in order to preserve world order, which means arming “moderates” in Syria and enforcing no fly zones over sovereign countries even though that’s impossible to do without risking full-scale war.

Jeb also argued that when we fail to intervene in foreign countries, we create a dangerous power vacuum. And yet creating a power vacuum, which was filled by Iran and ISIS, is precisely what our failed experiment in Iraq accomplished. But in Jeb’s world, none of this happened. ISIS only exists because we didn’t stay in Iraq long enough, because we didn’t occupy the country interminably.

Carly Fiorina, arguably the most enthusiastic warmonger in the Republican field, gave a rehearsed speech about our need to “rebuild the Sixth Fleet” and “the missile defense program in Poland” and to “conduct very aggressive military exercises in the Baltic States.” She also wants “put in a few more thousand troops in Germany, not to start a war, but to make sure that Putin understands that the United States of America” means business.

Marco Rubio wants to cut spending across the board except, of course, on defense, where the budget is the most bloated and where we spend more than the next seven countries combined. And he sees no connection whatsoever between our military misadventures in the Middle East and the pervasive anti-American sentiment in the region. “They hate us because of our values,” Rubio said. “They hate us because our girls go to school. They hate us because women drive in the United States.”

This is a stupid, Manichean ideology that reduces the world into the simplest terms possible. It’s also a convenient way to avoid acknowledging our own follies, which is necessary if we’re to learn anything from them.

The Democratic Party was also complicit in our Iraq blunder. The difference is that the Democratic candidates all accept this. There’s no historical revisionism or blustering talk about doubling down on failed policies. For the GOP candidates, however, history starts in 2008, when Obama was elected. It’s Obama’s economy, Obama’s wars and Obama’s blunders. They simply refuse to see what went wrong before 2008 and how those errors shaped the political realities today.

There are plenty of reasons to not elect a Republican in the next presidential election, but foreign policy is as significant as any. These candidates aren’t interested in diplomacy and they won’t even acknowledge historical facts. They praise the troops in the abstract, but are all too eager to send them abroad to police the world and to wage wars of choice – this is astonishing given what’s happened in the last fifteen years.

America can’t afford another neoconservative in the White House, and that’s the interventionist ideology espoused by most of the Republican candidates. We’ve paid too high a price for this already. We’ve spent trillions of dollars and thousands of lives and the world is no safer for it. Obama spent eight years trying to clean up the mess left by the last Republican president, and he’s barely scratched the surface.

There are real threats out there, and total isolationism is as unrealistic as it is dangerous. But we have to be careful about when and where we intervene, and about how we allocate resources. The warmongering and the nationalist chest-beating during last night’s debate is a reminder that the Republican Party doesn’t understand this.