College football's plantation problem: The violent game -- and billion-dollar industry -- where black kids take all the risk for none of the profit 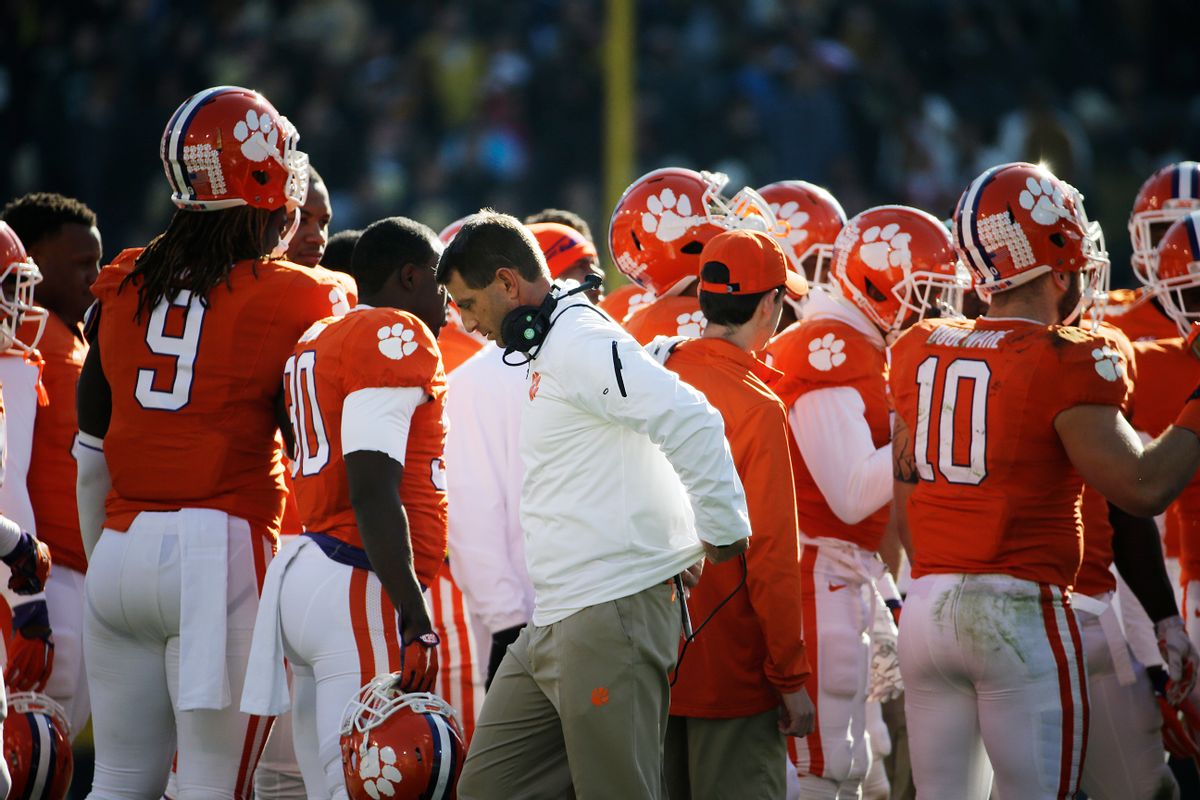 By now, we’ve all heard the story of Tim Wolfe, the president of the University of Missouri who resigned Monday, amid accusations that he had tolerated an atmosphere of racial hostility on campus.

Any college president who views “systematic oppression” as a belief system, or a perception, rather than an objective reality, deserves his or her pink slip.

But the cold fact of it is that Wolfe resigned not because of his towering ignorance, or because of campus activists, or a graduate student’s hunger strike against him, or even the threat of a faculty walkout.

No, Wolfe resigned because the members of the Mizzou football team threatened not to play ball until he did.

As media narratives go, this chain of events has been heralded as a triumph, some kind of civil rights coup in shoulder pads. And Wolfe is, without a doubt, the kind of benighted fool who makes for a perfect scapegoat.

But there’s a sadder and more disruptive lesson in all this, one about the power of this country’s Football Industrial Complex, which has hijacked our system of higher education and which is (whether we choose to face this or not) a major player in our country’s ongoing legacy of racism.

The very idea that our most popular and profitable sport features huge, muscled young men—two-thirds of them African-American—engaging in a contest violent enough to leave many of them brain damaged should be deeply troubling to all of us.

So should the fact that college football has become a billion-dollar industry in which the employees who incur 100 percent of the physical risk receive zero percent of the proceeds.

Instead, they are awarded a free education. But as any college football player at a major program will tell you, that “free education” includes up to 60 hours a week of practice, film study, workout time, conditioning and travel. That’s not counting the games.

Because let’s be honest: nobody—aside from the player’s family and the odd coach—actually gives a shit whether players are getting an education. The only reason they’re on campus is to entertain us on Saturday afternoon, to serve as a gladiatorial focal point for our tribal worship of hyper-masculine spectacle.

When it comes to top tier football programs, at least, the term “student-athlete” is a joke. And everybody knows it.

Of course, one of the things that makes sports in general, and football in particular, so alluring is the notion that it’s a color-blind meritocracy. All that matters between the chalk lines is grace, speed, strength and valor—along with the capacity to inflict violence without remorse and to absorb it without complaint. This is all true enough.

But the essential role that football serves in our culture is to provide a massive distraction from the systematic inequality that keeps poor kids—mostly kids of color—locked in a cycle of poverty and incarceration.

Football’s many apologists are constantly justifying their consumption of the sport by proclaiming that it’s a “way out” for “certain kids.”

I recently served on a panel with Ed Rendell, the former Pennsylvania governor, who serves as a post-game TV analyst for the Philadelphia Eagles, along with his role as a bloviator on MSNBC. Asked to address the ethical questions about football, Rendell immediately trotted out the line that football provides scholarships for hundreds of kids who wouldn’t be able to attend college otherwise.

It apparently never occurred to him that these same scholarships might have been awarded to economically disadvantaged students with genuine academic promise and ambitions.

Because this point never occurs to us football fans. Just as it never occurs to us that football, as a form of entertainment, winds up reinforcing grotesque racial stereotypes when it comes to African-American men. Namely, that they are inherently violent and animalistic.

This is why sportscasters and talk radio hosts and fans think nothing of referring to players—African-Americans especially—as “studs” and “specimens” and “beasts.” It’s why we take such pleasure in excoriating players for their greed or their sloth or their criminal behaviors.

But the canard that football is a “way out” for poor kids of color isn’t just morally abhorrent. It’s also total bullshit. Less than 10 percent of high school seniors will play football in college, and fewer still will receive scholarships; 215 will make the pros. That is one out of 500. Most will be out of the league within four years.

Football isn’t a ticket to ride. It’s a lottery ticket. The message it sends to poor kids of color is that their only path to fame and glory resides in getting really good at a really violent game, in the hopes some white owner will pay them a fortune.

If they’re really lucky, they get to run and jump and lift weights and have their bodies inspected for the benefit of a pack of old white coaches at the NFL combine. The whole operation has the optics of an insanely monetized slave auction.

In my view, much of the reason we focus so much of our attention on the capitalistic drama of those few kids who sign multimillion-dollar contracts precisely because we prefer not to think about the other 499 kids, the ones who will never earn a dime playing ball, the ones who need better childcare programs and better schools and better job training and better wages.

Here, too, the football industry plays a role. Because our devotion to the game has led dozens of cities and states to allocate billions of dollars in public funds to the construction of vast stadiums, money that might otherwise have been invested in economically disadvantaged neighborhoods.

The football players at the University of Missouri are to be applauded for their activism. But the very idea that moral progress should depend on the activism of football players is a sad reminder of the sport’s outsize influence.

The message our culture sends over and over again is that Black Lives Matter only so long as they are housed in bodies capable of glory on the gridiron.

It’s a sickening arrangement, one we not only consent to, but sponsor, every time we sit down to enjoy a game. And it will prevail long after Tim Wolfe disappears from public view.