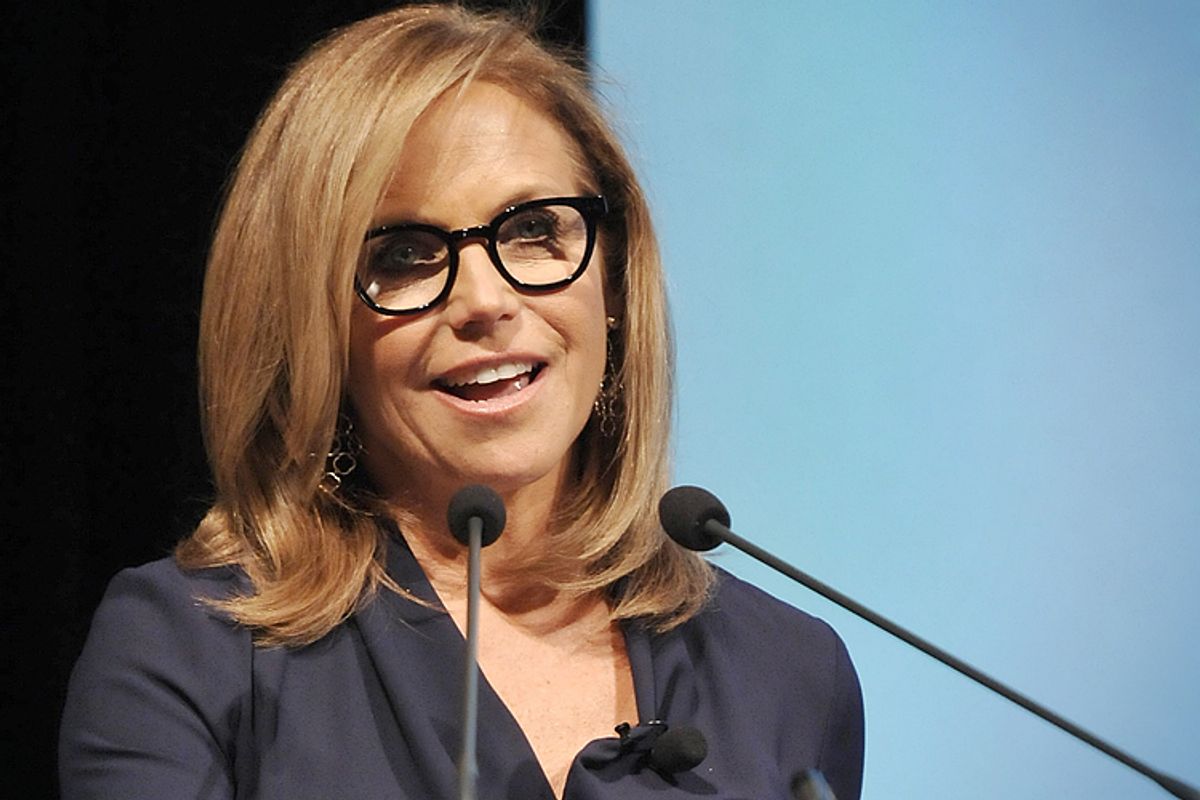 Katie Couric has once again become the scourge of frothing conservatives everywhere. In 2008 she singlehandedly ended John McCain’s presidential bid by asking Sarah Palin whether she ever read a newspaper. (All evidence suggested the true answer was “No.”) Now she has antiabortionists upset because she has dared to take her cameras inside a Planned Parenthood clinic, which looks like a fairly normal medical center and not the blood-soaked abattoir of dismembered baby limbs that conservatives just know it to be in their tiny blackened hearts. For shame, Katie Couric!

The perky newswoman recently sat down with Planned Parenthood head Cecile Richards for an interview for Yahoo! News, during which Richards defended the organization and pushed back on the infamous videos released over the summer by the undercover antiabortion (and Orwellian-named) group Center for Medical Progress.

As a side segment, Couric and her camera crew toured a new Planned Parenthood facility in Queens. The resulting four minutes of video made antiabortionists angry, presumably because none of it was dubiously-sourced stock footage that claimed to have been shot inside a PP clinic but was actually from somewhere else.

As you can see here, the Queens facility looks like an anodyne medical clinic, the type of place members of either gender might go to get a mole removed or some new bridgework. Except for the metal detector inside the front entrance and the bulletproof windows. Which protects even patients who are coming into the clinic to get treatment for something unrelated to abortion services, like a sexually transmitted disease. It’s great that some poor 17-year-old girl who needs treatment for an STD should have to go behind bulletproof glass and through a metal detector before being treated for gonorrhea. That is definitely a healthy message that in no way implies sexual activity is shameful that we should want to send to teenagers.

Watching this, I couldn’t help but think back to some of the justifications I read about HB2, the Texas antiabortion law that led to the infamous filibuster by Wendy Davis and was eventually signed into law by then-Governor Rick Perry. HB2 mandated (there’s an ironic-sounding word for it) that abortion facilities follow the same standards as Ambulatory Surgical Centers, an expensive and unnecessary upgrade for clinics that already often operate on tight budgets. The practical effect was to ensure that all but six clinics in the entire state would have to close, making abortion services inaccessible for vast swaths of women across Texas.

The bill was an obvious ploy meant to restrict women’s right to choose, part of the slow chipping away of that right that antiabortionists have worked towards since Roe v. Wade was decided in 1973. But defenders of HB2 often denied this. The bill was necessary, they said, because they were oh so concerned with women’s health, with making sure that women who underwent abortions were doing so in the safest and cleanest of facilities. The bill would protect women from the bloodthirsty butchers of the abortion industry.

Anyone with half a brain in her head knew this was garbage. Abortion is actually a safer procedure than childbirth for mothers, with a mortality rate of .6 per 100,000 compared to 8.8 per 100,000 for live births. Facts are so inconvenient.

But for the four people in the country who might believe in the sincerity of the antiabortion crowd that got HB2 passed in Texas and similar laws passed in other states, the reaction to Couric’s segment should lay that to rest. Here is a nice, clean medical facility stocked with what looks like top-notch medical equipment, trained nurses and gynecologists on site, and anything else necessary to ensure that the women who come there seeking an abortion can have it performed safely and discreetly. All without without being shamed or judged, since the psychological health of women making a difficult decision is as important as their physical health.

And yet antiabortionists are up in arms over the segment, claiming it hides Planned Parenthood’s true nature. After all, they have not just those discredited videos. They also have Yelp reviews to prove their case that Planned Parenthood is basically just an unclean, uncaring abortion factory churning out fetal tissue the way Foxconn churns out iPhones. Because when we’re talking about the health of women, we should definitely rely on a handful of cherry-picked reviews written by anonymous Yelp users. That’s a great standard for an allegedly modern society.