"I don't think she can call herself a feminist": Palestinian blasts Hillary Clinton for "selective" feminism 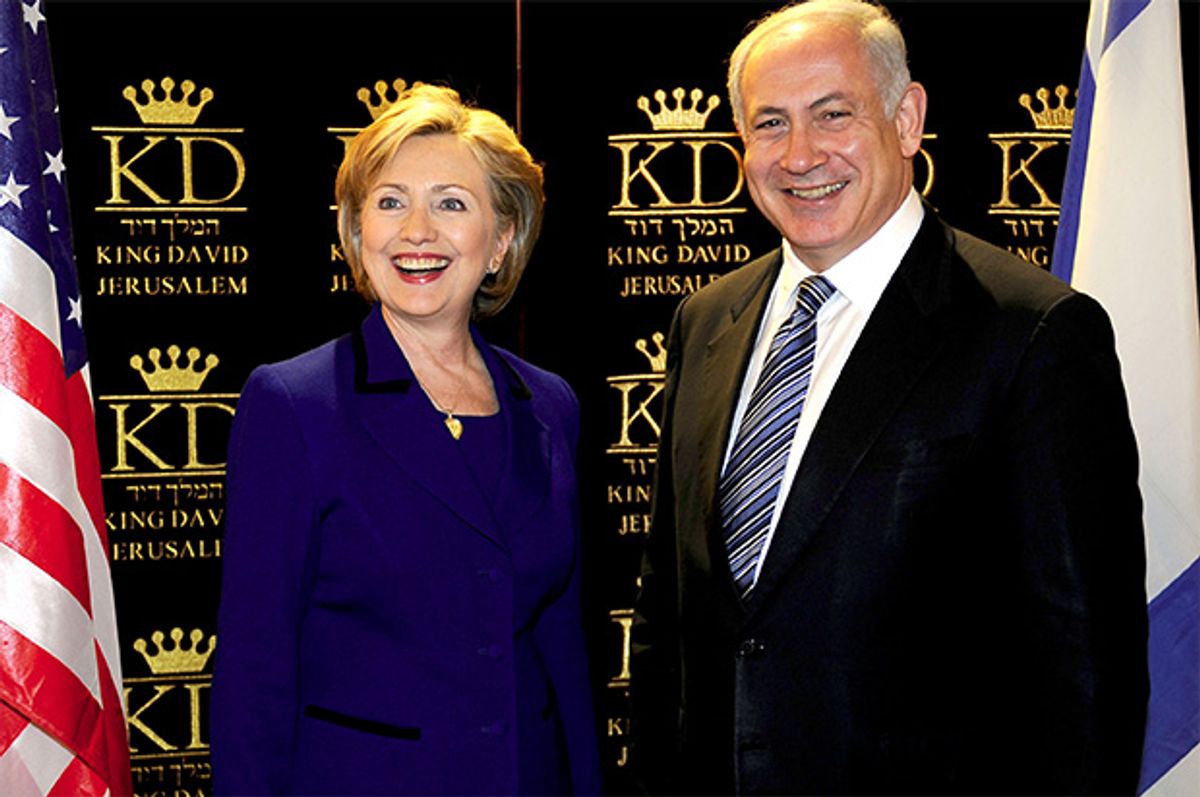 "There are millions of women and girls like me. What about us? According to [Hillary Clinton], we do not exist. We are invisible, like women have been treated throughout history," wrote Layali Awwad, a young Palestinian feminist and human rights activist, in an open letter to Hillary Clinton.

Awwad was responding to an article Clinton published in The Forward on Nov. 4, in which the Democratic presidential candidate reaffirmed her "unbreakable bond" with hard-line right-wing Israeli Prime Minister Benjamin Netanyahu.

"When you chose to speak about my homeland, not once did you mention Israel's human rights violations against Palestinian women and children," Awwad wrote to Clinton. "Even worse, you described us as lurking terrorists motivated only by 'incitement,' as if the Israeli military occupation does not exist."

Layali Awwad grew up in the city of Ramallah, in the West Bank, which has been under illegal Israeli military occupation since 1967. It was under this brutal military occupation that she has lived virtually all of her life. Awwad says her childhood was taken away from her. Since age five, she has had to trek through Israeli military checkpoints to go to school. She recalls being "searched and humiliated on a daily basis," having dogs sicced on her, and being shot at by Israeli occupation soldiers.

Now a freshman at Kenyon College, in Ohio, Awwad is pursuing a career in human rights advocacy. With her open letter to Clinton -- which circulated widely, garnering more than 20,000 shares in three days -- the young activist's work appears to have already begun.

Awwad sat down with Salon and discussed her experiences as a Palestinian feminist, her criticisms of Clinton, and her hopes for the future.

- What inspired you to be a feminist and a human rights activist?

I feel like my childhood was abruptly taken away from me at a very young age. At the age of five, in order to get to kindergarten on time, I had to leave my house hours early to cross the Israeli checkpoints that hindered my access to school. Despite my and my sisters' young age, we were treated like security threats. Our backpacks were constantly searched by the soldiers manning the checkpoint.

I vividly recall waiting in line and being forced to walk through caged-off sidewalks while my Israeli counterparts drove through with ease. My sisters and I often had guns aimed at us. In fact, on our way to school one day, while making our usual walk down the hill, Israeli soldiers started firing at us even though we posed no threat and were clearly armed with nothing but our backpacks and school books.

So, in a nutshell, I was inspired to become an activist and a feminist by my very own experiences and the hardships my family and I experienced living in Palestine.

The Israeli occupation dehumanizes and displaces Palestinians by enforcing a hierarchical system that discriminates between people based on race, nationality, ethnicity, and religion. Feminism rejects the dehumanization of women and their treatment as lesser beings merely due to their gender. I personally believe that human rights and equality are at the forefront of feminism. Although feminism focuses on gender-based differences, I believe its core principles are not in line with a military occupation that regularly dehumanizes Palestinian women and treats them like third-class citizens.  The Palestinian issue is therefore a feminist issue; and it inspired me to become both a feminist and human rights activist.

- Who are your role models?

There are many human rights activists and feminists that I look up to. I look up to Neferti Tadiar, a Professor at Barnard College. She advocates for human rights and continuously draws a connection between the Palestinian struggle and feminist issues. In advocating for human rights, she calls for peaceful resistance against the inhumane acts committed by the Israeli Occupation and supports the Academic and Cultural Boycott of Israel.

I am also inspired by Palestinian artists and activists who use their talent to show Palestinian voices to the world. Oscar nominee Amer Shomali in his movie The Wanted 18 sheds light on the peaceful resistance carried out by Palestinians. He focuses on the role of Palestinian women, which is often neglected by Western media. He cleverly uses humor to portray the Palestinian struggle.

Suad Amiry is a Palestinian author most famously known for her book Sharon and My Mother in Law. She is another feminist and human rights activist I look up to. In her writings, she presents strong Palestinian men and women who defy all forms of inequality and aggression but are not known by the general public.

These leaders and many more inspire my fight for justice and equality.

- You said you looked up to Hillary Clinton. Do you think she can still call herself a feminist when she supports militaristic policies that deny basic human rights to women around the world, particularly in occupied Palestine and the broader Middle East?

Secretary Hillary Clinton claims to advocate for equality, justice, feminism, and human rights. Sadly, when it comes to the Palestinian struggle, she tirelessly expresses her ‘unbreakable’ support to a system that dehumanizes Palestinian women and girls and discriminates against them.

I believe the Israeli occupation, and Secretary Clinton's decision to ignore it for political gain, contradict the values and high moral standards she says she stands for. For that reason, I don't think she can call herself a feminist, when, on a daily basis, she upholds policies that lead to the demise of countless women in Palestine and the Middle East at large.

She has no problem supporting a system that denies the rights of women in other areas around the world as long as she hits the right notes to get elected.

I believe the article "Hillary Clinton: Good for White Feminism, Bad for Racial Justice," published in the journal Racism Review, provides a comprehensive summary of Clinton's role as a feminist and how it contradicts with social justice.

- Is Hillary Clinton whitewashing Israel in her portrayal of it as a bastion of progressivism?

Hillary Clinton is whitewashing Israel by portraying it as a progressive "democratic" country where women's and LGBTQ rights are respected. The racist ideology and history of Israel makes its actions dependent upon violence against women, which Clinton chooses to turn a blind eye to.

Mordechai Kedar, an Israeli Professor and a former Israeli military intelligence officer, said that raping the mothers and wives of Palestinian fighters would reduce the number of attacks by Hamas. He added, “It sounds very bad, but that's the Middle East.” I would say that’s Israeli, not the Middle East.

Ayelet Shaked, an Israeli lawmaker [and now Minister of Justice in Netanyahu's government], said that Palestinian women must be killed before they give birth to “little snakes.”

Hillary Clinton recently tweeted, “Every woman deserves to make her own decisions about birth control—without interference from politicians or her boss. #ThxBirthControl.” Israeli policies assure an increase in the number of miscarriages by Palestinian women by forcing them to go into labor at military checkpoints, or through the blockage of basic resources like water and medical supplies.

This begs the question: Does Hillary’s feminism extend to women outside America?

Secretary Clinton also promotes Israel as a civilized ‘gay friendly’ country. By doing so, she is pinkwashing Israel in an attempt to divert people’s attention from its ongoing human rights violations. Moreover, the statistics that ‘prove’ Israel to be ‘gay friendly’ are in fact racist because they are inherently exclusive of certain ethnicities and religions.

- You wrote: "There are millions of women and girls like me. What about us? According to your article, we do not exist. We are invisible." How do you think Palestinians, and particularly Palestinian women, are made invisible by the Western political system and media?

Western media very rarely allow Palestinians to voice their opinions and experiences in the same capacity as Israelis. Analysis by PunditFact found that CNN interviews four Israelis for every one Palestinian. This is indicative of Western media's inclination to adopt and publish material from only an Israeli point of view.

For instance, during the 2014 assault on Gaza, little to no consideration was given to the blockade or the more than 2,200 Palestinians, the majority of whom were civilians, who were brutally and unjustly murdered by Israel, hundreds of whom were children.

The post-war trauma that civilians in Gaza continue to experience is rarely given any attention here in the U.S. The case is not very different where Palestinian women are concerned.

In the case of Isra' Abed, video evidence clearly shows she was unarmed and had her hands up in the air when she was shot six times by Israeli soldiers. Despite a complete lack of evidence, Isra' is still being accused of stabbing Israelis.

Western media are guilty of broadcasting only the Israeli narrative, ignoring Palestinian suffering and portraying the Israeli army as taking only defensive action, not as an occupying force.

- Hillary Clinton is so pro-Israel she even jabbed at Obama by siding with Netanyahu. What do you think of her hard-line views on Israel?

Secretary Clinton’s pro-Israel stance completely overlooks the Palestinian side, which is very disappointing. In her op-ed, she turned a blind eye to Palestinians, feminism, justice, equality, and human rights. Palestinians are paying the price of her attempt to please the pro-Israel lobby and donors.

Nevertheless, I remain optimistic for a better future. There are changes in the mainstream discourse on Palestine and Israel in the U.S., and specifically within the Jewish community. The community is changing and expanding because of groups like Jewish Voice for Peace, which honor the Jewish tradition of social justice when it comes to Israel. Because of their leadership, and other activist groups like Black Solidarity for Palestine, I remain hopeful.