The latest from Paris: At least 35 reported dead, dozens more being held hostage

A series of attacks has devastated the city, echoing the horror of the Charlie Hebdo massacre just 10 months ago 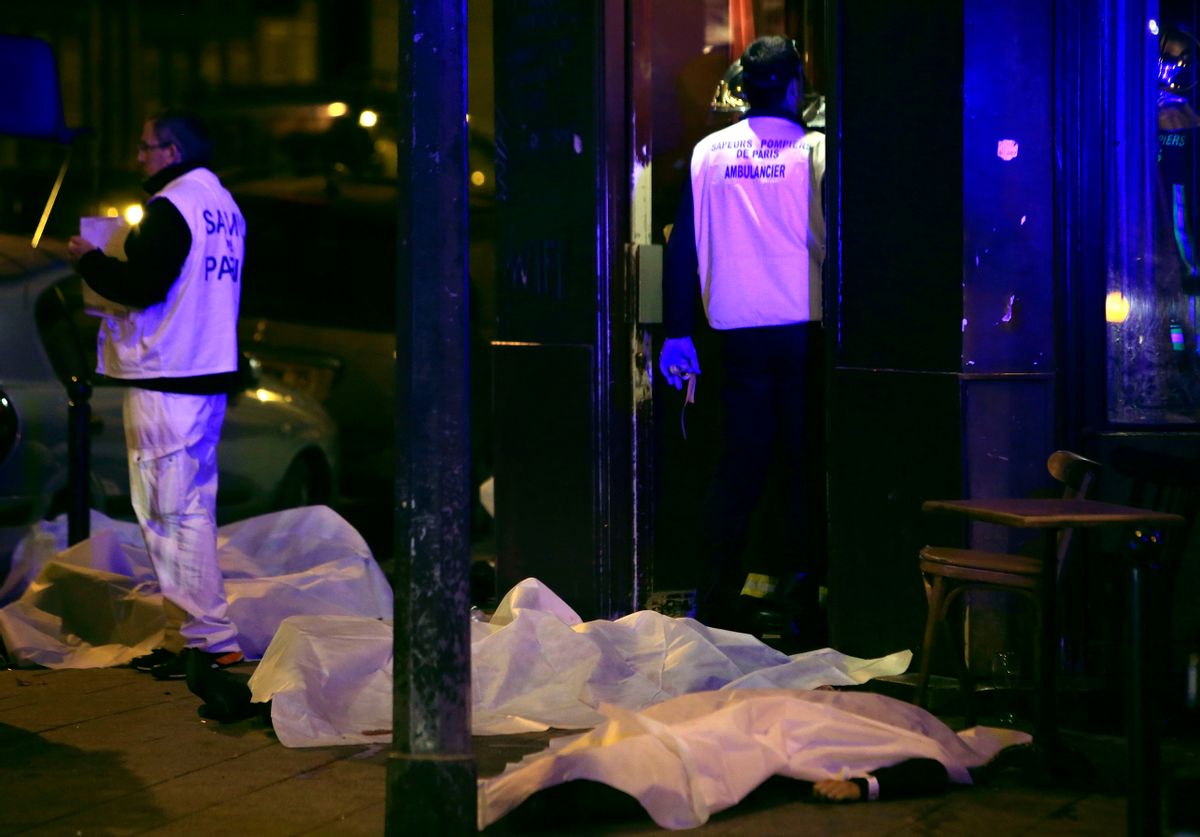 PARIS (AP) — At least 35 people were killed Friday in shootings and explosions around Paris, many of them in a popular concert hall where patrons were taken hostage, police and medical officials said. The series of attacks gripped the city in fear and recalled the horrors of the Charlie Hebdo carnage just 10 months ago.

The officials spoke on condition of anonymity because they were not authorized to be publicly named in the quickly moving investigation.

There was no immediate claim of responsibility for the series of attacks.

A police official confirmed one explosion in a bar near the stadium. It was not known if there were casualties.

An Associated Press reporter in the stadium Friday night heard two explosions loud enough to penetrate the sounds of cheering fans. Sirens were immediately heard, and a helicopter was circling overhead. French President Francois Hollande, who was in the stadium, was evacuated and immediately held an emergency meeting.

The attack comes as France has heightened security measures ahead of a major global climate conference that starts in two weeks, out of fear of violent protests and potential terrorist attacks.

Emilioi Macchio, from Ravenna, Italy, was at the Carillon bar near the restaurant that was targeted, having a beer on the sidewalk, when the shooting started. He said he didn't see any gunmen or victims, but hid behind a corner, then ran away.

France has been on edge since deadly attacks by Islamic extremists in January on satirical newspaper Charlie Hebdo and a kosher grocery that left 20 dead, including the three attackers.

The restaurant targeted Friday, Le Carillon, is in the same general neighborhood as the Charlie Hebdo offices, as is the Bataclan, among the best-known venues in eastern Paris, near the trendy Oberkampf area known for a vibrant nightlife. The band Eagles of Death Metal was scheduled to play there Friday night.

The country remains on edge after January attacks on satirical newspaper Charlie Hebdo, which had caricatured the Prophet Muhammad, and a kosher grocery. The Charlie Hebdo attackers claimed links to extremists in Yemen, while the kosher market attacker claimed ties to the Islamic State group.

The country has seen several smaller-scale attacks or attempts since, including an incident on a high-speed train in August in which American travelers thwarted an attempted attack by a heavily armed man.

France's military is bombing Islamic State targets in Syria and Iraq and fighting extremists in Africa, and extremist groups have frequently threatened France in the past.

French authorities are particularly concerned about the threat from hundreds of French Islamic radicals who have travelled to Syria and returned home with skills to stage violence.