The latest from Paris: French president vows to attack ISIS without mercy 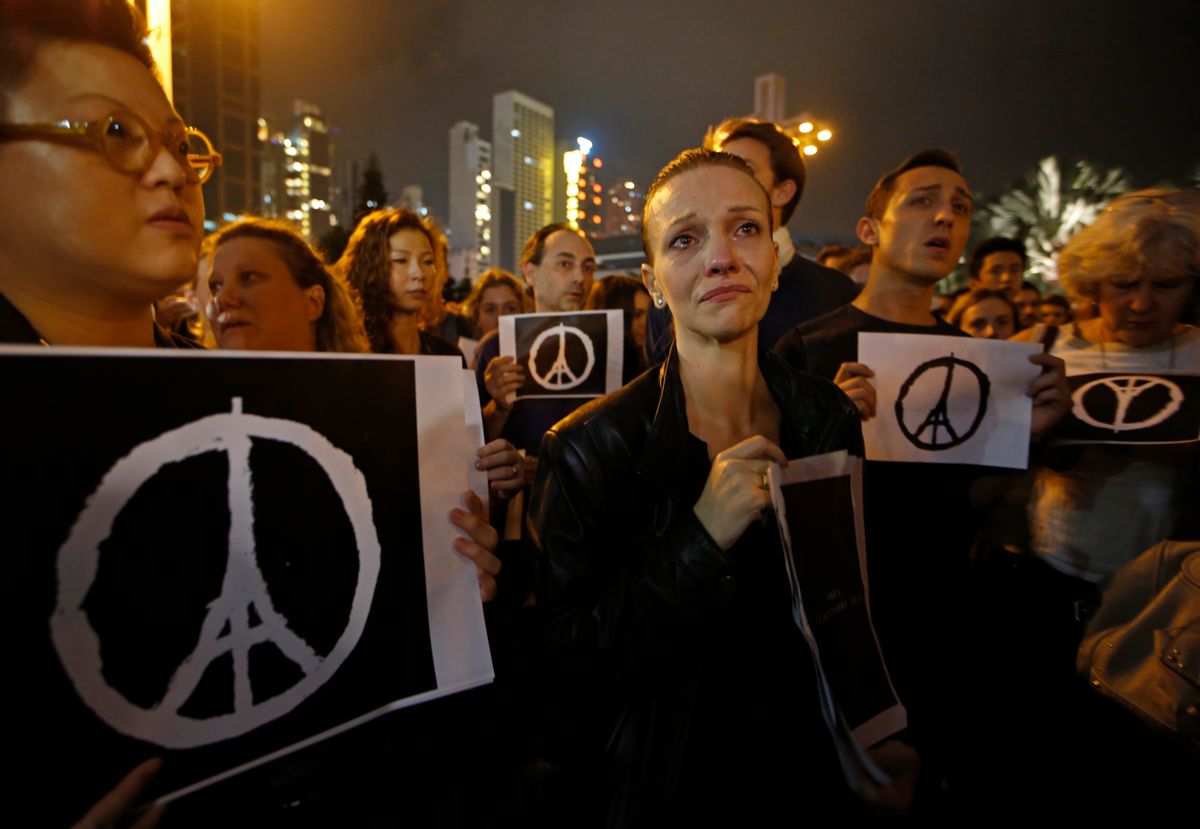 He said at least 127 people died Friday night in shootings at Paris cafes, suicide bombings near France's national stadium and a hostage-taking inside a concert hall. Another 200 or so were injured, dozens critically.

Hollande, who declared three days of national mourning and raised the nation's security to its highest level, called the carnage "an act of war that was prepared, organized, planned from abroad with internal help."

The Islamic State group's claim of responsibility appeared in Arabic and French in an online statement circulated by IS supporters. It was not immediately possible to confirm the authenticity of the admission, which bore the group's logo and resembled previous verified statements from the group. The statement mocked France's involvement in air attacks on suspected IS bases in Syria and Iraq, noting that France's air power was "of no use to them in the streets and rotten alleys of Paris."

As Hollande addressed the nation, French anti-terror police worked to identify potential accomplices to the attackers, who remained a mystery to the public: their nationalities, their motives, even their exact number. Police said a Syrian passport was recovered from the remains of one suicide bomber outside the stadium.

Authorities said eight died, seven in suicide bombings, a new terror tactic in France. Police said they shot and killed the other assailant.

Prosecutor's office spokeswoman Agnes Thibault-Lecuivre said authorities couldn't rule out the possibility that other militants involved in the attack remained at large.

The violence raised questions about security for the millions of tourists who come to Paris and for world events routinely hosted in the normally luminous capital, where 1,500 troops were deployed to support police in restoring order and reassuring a frightened populace.

French Interior Minister Bernard Cazeneuve announced that all public demonstrations would be banned until Thursday and local governments would have the option to impose nightly curfews. He said police and military reinforcements would be deployed to key public buildings.

Many of Paris' top tourist attractions closed Saturday, including the Eiffel Tower, the Louvre Museum and the Disneyland theme park east of the capital.

Parisians expressed shock, disgust and defiance in equal measure. Hundreds of soccer fans departing the stadium Friday night waved French flags and sang impromptu choruses of the national anthem, "Le Marseillaise." The next morning, hundreds queued outside a hospital near the Bataclan theater, scene of the most appalling violence, to donate blood. As a shrine of flowers expanded along the sidewalk, a lone guitarist sang John Lennon's peace ballad, "Imagine."

Hollande said the attacks meant France would increase its military efforts to crush IS. He said France — which besides bombing suspected IS targets in Syria and Iraq as part of the U.S.-led coalition also has troops fighting militants in Africa — "will be merciless toward the barbarians of Islamic State group."

Reflecting fears in other European capitals of the risk of coordinated or copycat attacks, the British government mounted a meeting of its own emergency COBRA intelligence committee. Italy said it, too, was raising security levels on borders and major public places.

British Prime Minister David Cameron said British citizens were among the casualties in Paris, but he declined to provide specifics. He warned that the threat posed by Islamic State "is evolving."

Three suicide bombs targeted spots around the national Stade de France stadium, north of the capital, where Hollande was watching an exhibition soccer match. Fans inside the stadium recoiled at the sound of explosions, but the match continued.

Around the same time, fusillades of bullets shattered the clinking of wine glasses in a trendy Paris neighborhood as gunmen targeted a string of cafes, which were crowded on an unusually balmy November night. At least 37 people were killed, according to Paris Prosecutor Francois Molins.

The attackers next stormed the Bataclan concert hall, which was hosting the American rock band Eagles of Death Metal. They opened fire on the panicked audience and took members hostage. As police closed in, three detonated explosive belts, killing themselves, according to Paris police chief Michel Cadot.

Another attacker detonated a suicide bomb on Boulevard Voltaire, near the music hall, the prosecutor's office said.

Video shot from an apartment balcony and posted on the Le Monde website Saturday captured some of that horror as dozens of people fled from gunfire outside the Bataclan down a passageway to a side street.

At least one person lies writhing on the ground as scores more stream past, some bloodied or limping. The camera pans down the street to reveal more fleeing people dragging two bodies along the ground. A woman and two others can be seen clinging to upper-floor balcony railings in an apparent desperate bid to stay out of the line of fire.

Le Monde said its reporter who filmed the scene from his apartment balcony, Daniel Psenney, was shot in the arm after he stopped filming, when he went downstairs to help someone who had collapsed in the alley.

A tall, sturdy 38-year-old concert-goer named Sylvain collapsed in tears as he recounted the attack, the chaos and his escape during a lull in gunfire.

"I was watching the concert in the pit, in the midst of the mass of the audience. First I heard explosions, and I thought it was firecrackers.

"Very soon I smelled powder, and I understood what was happening. There were shots everywhere, in waves. I lay down on the floor. I saw at least two shooters, but I heard others talk. They cried, 'It's Hollande's fault.' I heard one of the shooters shout, 'Allahu Akbar,'" Sylvain told The Associated Press. He spoke on condition that his full name not be used out of concern for his safety.

He was among dozens of survivors offered counseling and blankets in a municipal building set up as a crisis center.

Hollande declared a state of emergency, announced renewed border checks along frontiers that are normally open under Europe's free-travel zone, and canceled a planned trip to this weekend's G-20 summit in Turkey.

France has been on edge since January, when Islamic extremists attacked the satirical newspaper Charlie Hebdo, which had run cartoons of the Prophet Muhammad, and a kosher grocery. Twenty people died in those attacks, including three shooters.

French authorities are particularly concerned about the threat from hundreds of French Islamic radicals who have traveled to Syria and returned home with skills to mount attacks.

"The big question on everyone's mind is: Were these attackers — if they turn out to be connected to one of the groups in Syria — were they homegrown terrorists or were they returning fighters?" said Brian Michael Jenkins, a terrorism expert and senior adviser to the president of the Washington-based RAND Corporation.