Bush's war created this mess, GOP neocons would make it worse: The point the Democratic debate failed to make

Candidates postured over ISIS, but really have the same opinion. They needed to contrast that with an insane GOP 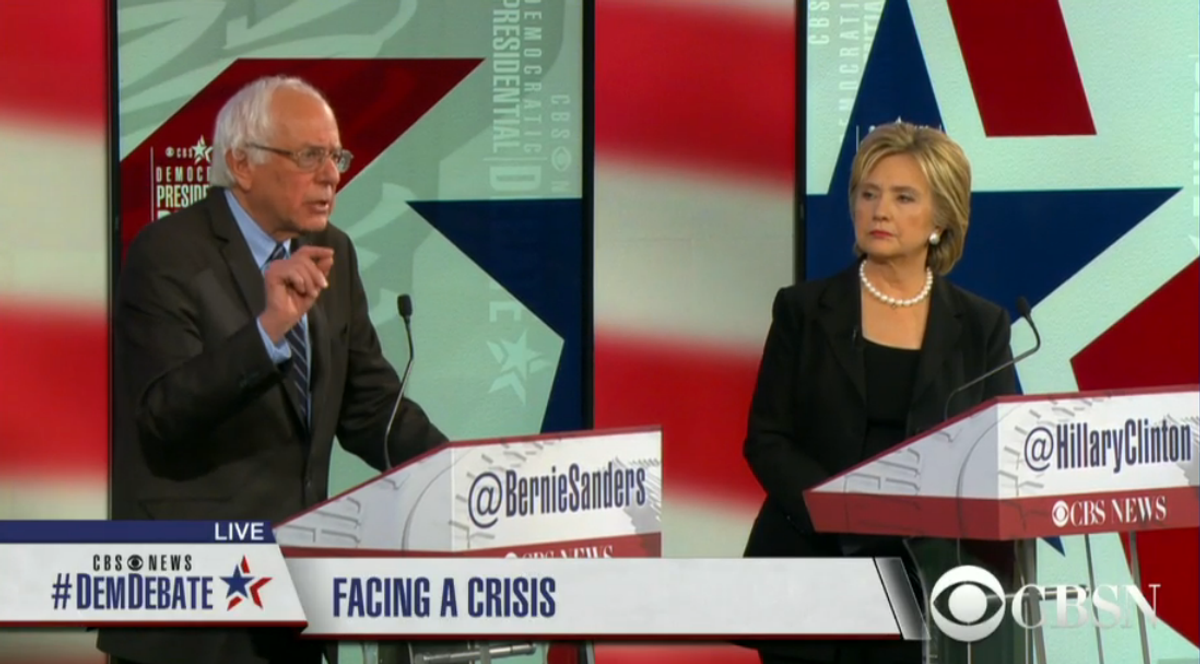 Despite plans to focus the debate on domestic issues, there was no way that the debate wouldn't be kicked off with a focus on the issue of ISIS, terrorism, and the hellish situation in Syria. It was a terrifying high wire act, with these politicians, who were planning to come in to talk about economic and domestic policy, having to come in and lay out their ideas about the issue that, like it or not, was on everyone's mind: What the hell to do about the impossible situation with ISIS.

What we learned is that they will argue with each other a lot, even though they all basically agree on the most important points.

Bernie Sanders. Sanders blundered early on, using his opening statement to barely glance past the Paris attacks to whip out his stump speech about income inequality, while the other two candidates wisely kept their opening remarks focused on the story that is on everyone's minds.

But after that, Sanders regained his footing. Sanders's opposition to the Iraq War---which he made a strong point of reminding the audience of---has led to a dovish reputation. But the categories of "dove" and "hawk" are overly simplistic, and Sanders demonstrated that by making it clear that if the choice is between tolerating ISIS's atrocities or going to war, he will support the latter. On this front, he's no different than the other two candidates, and he was, if anything, blunter about the fact that a military response is on the table.

"Well, in fact, I would argue that the disastrous invasion of Iraq, something that I strongly opposed, has unraveled the region completely," Sanders said. "And led to the rise of Al Qaeda– and to– ISIS. Now, in fact, what we have got to do– and I think there is widespread agreement here– ’cause the United States cannot do it alone." It was a smart, if blunt answer, that highlighted the difference the pointlessness of the Iraq War and the very real horror show that ISIS is dishing out.

Despite fears that this is Sanders's weak point, he was fine: Nuanced, clear-headed, and sharp, even if he keeps saying "Mooslum" instead of "Muslim."

Hillary Clinton. Sanders needled Clinton on her vote to authorize George W. Bush's use of military power, which did, as he said, lead to the destabilization of Iraq, a situation that led to the creation of ISIS. Clinton seemed unwilling to concede the point, insisting that that the radical views of ISIS have a lot different sources. Technically true, but it seemed dodgy to cling to that when it's nearly impossible to believe ISIS would have emerged if we'd never invaded Iraq.

Overall, however, Clinton's experience as Secretary of State shone through and she clearly was the strongest candidate on this issue. Her lengthy answer about her efforts to preserve stability in Iraq after the war showed that she understand the complexities of the region better than her opponents, saying, "I did early on say we needed to try to find a way to train and equip moderates very early so that we would have a better idea of how to deal with Assad because I thought there would be– extremist groups filling the vacuum."

She was also more cautious about endorsing a military response than Sanders: "There is no question in my mind that if we summon our resources, both our leadership resources and all of the tools at our disposal, not just military force which should be used as a last resort, but our diplomacy, our development aid, law enforcement, sharing of intelligence in a much more– open and cooperative way– that we can bring people together."

All of which made her prickly defensiveness all the more puzzling. Yes, she had a wrong vote on Iraq. But, as her answers showed, this is her area of expertise. Right now, the concern is less about recriminations for the past and more about what is going to happen next, and Clinton handled that part of the question with more detail and thoroughness than her opponents.

Martin O'Malley. O'Malley was the big surprise of the evening, sounding smart and confident on this issue, which has not been anything close to the focus of his campaign. He pulled a slightly sleazy move, claiming, "I would disagree with– with Secretary Clinton, respectfully, on this score," before going forward and saying exactly the same thing she did, which is that he thinks that we have to deal with ISIS, but we have to do it in a collaborative way with other nations. (All three candidates said this.)

This bit of rhetorical flimflam aside, O'Malley brought a moral conviction to his answers. "And ISIS, make no mistake about it, is an evil in this world," he said. "ISIS has brought down a Russian airliner. ISIS is now attacked the western democracy in– in France. And we do have a role in this. Not solely ours. But we must work collaboratively with other nations."

Where O'Malley really shone by pointing out that ISIS defies the foreign policy categories of old. "This is the new sort of challenge, the new sort of threat that does, in fact, require new thinking, fresh approaches and new leadership," he said. Considering that many of our blunders around ISIS come from trying to fit them into older understandings of how terrorist organizations or wars of conquest work, it was nice to hear at least one candidate very clearly articulate that this is uncharted territory in a lot of ways.

Despite all the fireworks and defensiveness on stage about this issue, what emerged was a surprising amount of consensus from the three candidates: That military response should be the last resort, but that ISIS is just so evil and barbaric that military response might be inevitable. If that is the case, then it should be done with a true international coalition. All three were very clear that they see the threat of ISIS as a real one, unlike the false threat of Iraq that Bush ginned up to justify that failure of a war.

Because the candidates all had basically the same view on this issue, it's a shame they didn't spend more time on the most important issue of all: Why any Democrat---whether it's Sanders, Clinton or O'Malley---would be better than any of the Republicans on offer when it comes to handling ISIS.

This was a massive failure, because what the public really needs to hear about, in this moment of crisis, is how the general Democratic plan differs from the Republican one. More than quibbling over minor differences between Democrats, the public needed to hear about the much bigger differences between the Democratic and Republican approach: How the Democrats will be more cautious, more nuanced, and work more with foreign nations instead of engaging in chest-thumping and a "shoot first" philosophy.