The free speech/p.c. argument we need to have, and which the right obscures: College kids are not the enemy, corporations and the government are 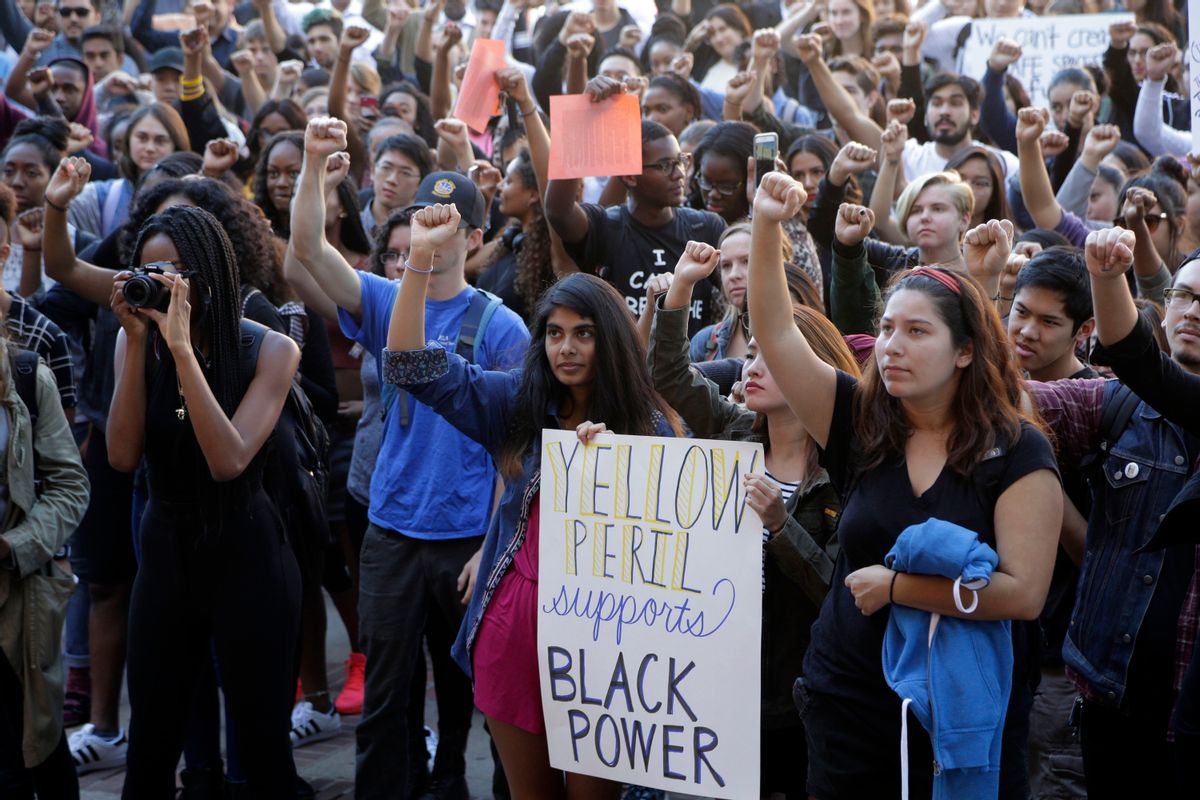 Yesterday, Suzanne Nossel, the head of PEN America, an organization dedicated to the freedom of expression across the United States, wrote an oped in the New York Times about the state of free speech on college campuses. She led with the following sentence:

Some of the most potent threats to free speech these days come not from our government or corporations, but from our citizenry.

By “our citizenry,” Nossel means the students currently arguing over how to balance the values of freedom of speech and racial equality and inclusion at places like Yale and the University of Missouri. And beyond that, the more general arguments we’ve seen these last few years over trigger warnings on syllabi, invitations to campus speakers, Common-Core readings and the like.

The most critical term here is “arguing” and “arguments.” That’s what students are doing: arguing. And getting the rest of us to argue. That’s what’s so odd in part about Nossel’s assumption. Whenever these free speech incidents arise on campus, there’s an explosion of conversation on the campus, in the media, on social media, throughout the country. Far from shutting discussion down, these controversies ignite it. Everyone has an opinion, everyone voices it.

But even if you’re less sanguine about these controversies, the notion that they pose a more “potent threat to free speech” than what governments and corporations do is risible. I assume the issue of government repression and surveillance—indeed, government censorship at places like the University of Missouri—is sufficiently well known so as to not require further elaboration. Though I doubt Nossel would agree. She is, after all, a former employee of the State Department, who has said:

To advance from a nuanced dissent to a compelling vision, progressive policymakers should turn to the great mainstay of twentieth-century U.S. foreign policy: liberal internationalism…should offer assertive leadership — diplomatic, economic, and not least, military — to advance a broad array of goals.

But when it comes to corporations, the case is equally strong. In their capacity as employers, corporations have a tremendous stranglehold over the freedom of speech of their employees. Not just on the job but also off the job. The owners and managers of firms frequently threaten workers if they talk back or act up: not just about matters pertaining to the workplace but also about political questions and political campaigns.

When employers engage in this kind of repression and censorship, there’s no explosion of discussion as there is when there’s a suggestion at Yale that students show some sensitivity in their choice of Halloween costumes. Partially because people like Nossel and the media are completely uninterested in the topic, even when the employer in question is a university. Earlier this year, Columbia University banned its workers from speaking Spanish. If Nossel wrote an op-ed about it in the New York Times (or frankly anywhere), I missed it.

But there's another reason there’s no media explosion over these abridgments of speech at work: They’re lethally effective. When workers are silenced, they’re silenced. They almost never go to the media to tell their stories. Because they’re too afraid, need to find another job elsewhere, or know all too well that the media doesn’t care.

At one point in her op-ed Nossel does give a nod to the status of speech in the workplace. Here's what she says:

Who would trade their [universities' and colleges'] free-range spirit for the dreary sameness of a corporate office, with its federally sanctioned posters on what constitutes unlawful discrimination?

That's where Nossel sees the threat to freedom of speech at work: in the "dreary sameness" induced by government efforts to inform workers of their rights against discrimination. It’s the fight against racial and other kinds of employment discrimination, in other words, that threatens a diversity of opinion at work.

There's a suspicion on the left that freedom of speech is often little more than a rationalization for racism or indifference to racism. I try to fight that suspicion all the time. But when the head of PEN America writes sentences like these, it makes that job infinitely harder.

Whatever one thinks about the current controversy over free speech at Yale and the University of Missouri, if the head of PEN America is going to leverage her pen on behalf of freedom of speech on the pages of the New York Times, she would do well to consider where the real threats to such speech lie.