Hillary's disgusting Wall Street deceit: The 9/11 gaffe that could come back to haunt her

The Democratic frontrunner attributes her big bank support to her brave work after the attacks. No one is buying it 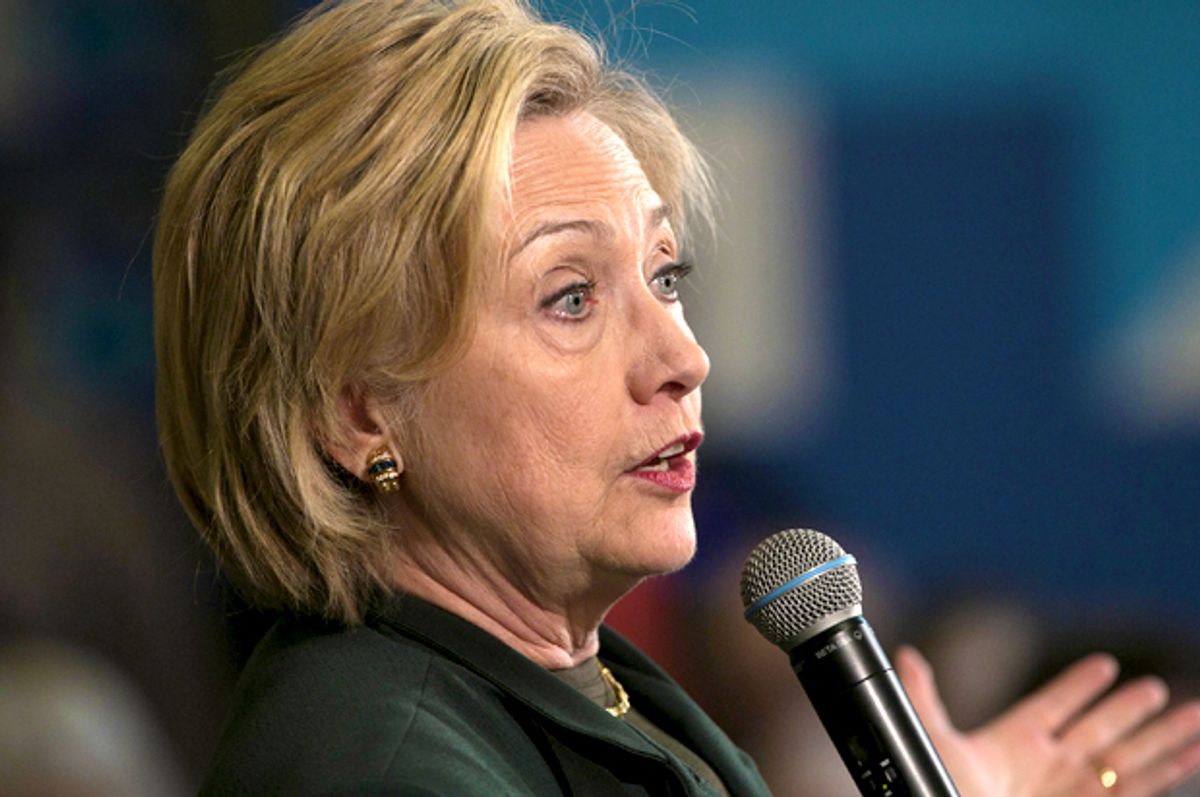 While much of the world's attention was still focused on the terrorist attacks in Paris, Hillary Clinton made her worst stumble in Saturday night’s Democratic debate in Iowa by defending her cozy relationship with Wall Street contributors as a consequence of being New York’s senator after the 9/11 attacks.

The exchange that led to that eyebrow-raising explanation started with CBS moderator John Dickerson saying, “So you’ve received millions of dollars in contributions and speaking fees from Wall Street companies. How do you convince voters that you are going to level the playing field when you're indebted to some of its biggest players?”

Clinton gave a predictable reply before the political fireworks began. She has the most comprehensive plan to go after big banks and other risky investment houses, she said, and added that if she’s so friendly to Wall Street she wouldn’t be under attack from two hedge fund guys buying anti-Hillary TV ads. Dickerson then asked Sen. Bernie Sanders what he thought of her response.

“Not good enough,” he replied, to applause. “Here’s the story. I mean, you know, let’s not be naive about it. Why do—why, over her political career has Wall Street been a major—the major campaign contributor to Hillary Clinton? You know, maybe they're dumb and they don't know what they're going to get, but I don’t think so.”

Sanders continued by saying, “six financial institutions today that have assets of 56 percent, equivalent to 56 percent of the GDP” and “issue two-thirds of the credit cards and one-third of the mortgages” must be broken up, before returning to attack Clinton's donors.

“I have never heard of a candidate, never, who has received huge amounts of money from oil, from coal, from Wall Street, from the military-industrial complex, not one candidate say, oh, these campaign contributions will not influence me,” he said. “Why do they make millions of dollars of campaign contributions? They expect to get something. Everybody knows that. Once again, I am running a campaign differently than any other candidate. We are relying on small campaign donors, 750,000 of them, 30 bucks a piece. That’s who I’m indebted to.”

Clinton then gave the reply some are claiming is one of her biggest gaffes of the 2016 campaign so far.

“Wait a minute. Wait a minute, he has basically used his answer to impugn my integrity. Let’s be frank here,” she began. “So, I represented New York, and I represented New York on 9/11 when we were attacked. Where were we attacked? We were attacked in downtown Manhattan where Wall Street is. I did spend a whole lot of time and effort helping them rebuild. That was good for New York. It was good for the economy and it was a way to rebuke the terrorists who had attacked our country.”

Political reporters covering the Democratic debate expected the former Secretary of State to dominate on international affairs and did not expect domestic issues to be a major part of the debate given Friday’s terrorist attacks in Paris. But Clinton ended up defending her past record, such as her Senate vote for the invasion of Iraq, more than saying what she would do in response to the latest ISIS barbarism, and then she awkwardly tied her support from Wall Street into the rebuilding that took place after 9/11.

Clinton’s answer was so unexpected the moderator brought it up again, citing a tweet from a viewer who wrote that he’s “never seen a candidate invoke 9/11 to justify millions of Wall Street donations.”

“I’m sorry that whoever tweeted that had that impression, because I worked closely with New Yorkers after 9/11 for my entire first term to rebuild,” she replied. “So, yes, I did know people... I’ve had a lot of folks give me donations from all kinds of backgrounds say, ‘I don’t agree with you on everything, but I like what you do. I like how you stand up. I’m going to support you.’ And I think that is absolutely appropriate.”

Various news outlets covering the debate pounced on the exchanges and declared it a major gaffe. The Nation wrote, “Though there was a breathtaking cynicism in the way Clinton took a question about Wall Street’s influence on her and turned it into a trifecta of righteousness—not only claiming that her efforts on behalf of finance capital were really part of the fight back against 9/11, and suggesting that any suggestion to the contrary was anti–New York and pro-terrorist… There was also something almost beautiful about the sheer chutzpah of the move.”

The Washington Post noted that “Twitter and Facebook both say that the 9/11 moment generated more conversation than any other exchange during the face-off. NPR calculates that Wall Street and the banks got more time than any other issue. By its count, the back-and-forth took up 11 minutes and 18 seconds of airtime, compared to 9 minutes and 16 seconds on foreign policy and 6 minutes on ISIS specifically.”

The Post said reporters following Hillary and the race as a blow-by-blow contest—such at Politico.com, the Economist, CNN, the Des Moines Register, and Wall Street Journal—all said her response was the most unscripted moment of the campaign so far and will come back to haunt her.

Meanwhile, on Saturday night’s debate stage, Sanders was aware he was scoring points and followed up Clinton's defense of her Wall Street donors by saying, “Who are we kidding? The business model of Wall Street is fraud. That’s what it is.”

That generated applause, prompting him to repeat it later, after praising Clinton for her work as a senator helping to rebuild lower Manhattan rebuild after the 9/11 attacks.

“She’s the senator from New York,” Sanders said. “She worked—and many of us supported you—in trying to rebuild that devastation. But at the end of the day, Wall Street today has enormous economic and political power. Their business model is greed and fraud. And for the sake of our economy, they must, the major banks must be broken up.”