Stop talking, Rose McGowan: Nobody gets to tell Caitlyn Jenner how to be a woman — or how to break "stereotypes foisted upon us by people like you"

The actress is an outspoken critic of Hollywood sexism, but this isn't the first time she's slammed LGBT folks 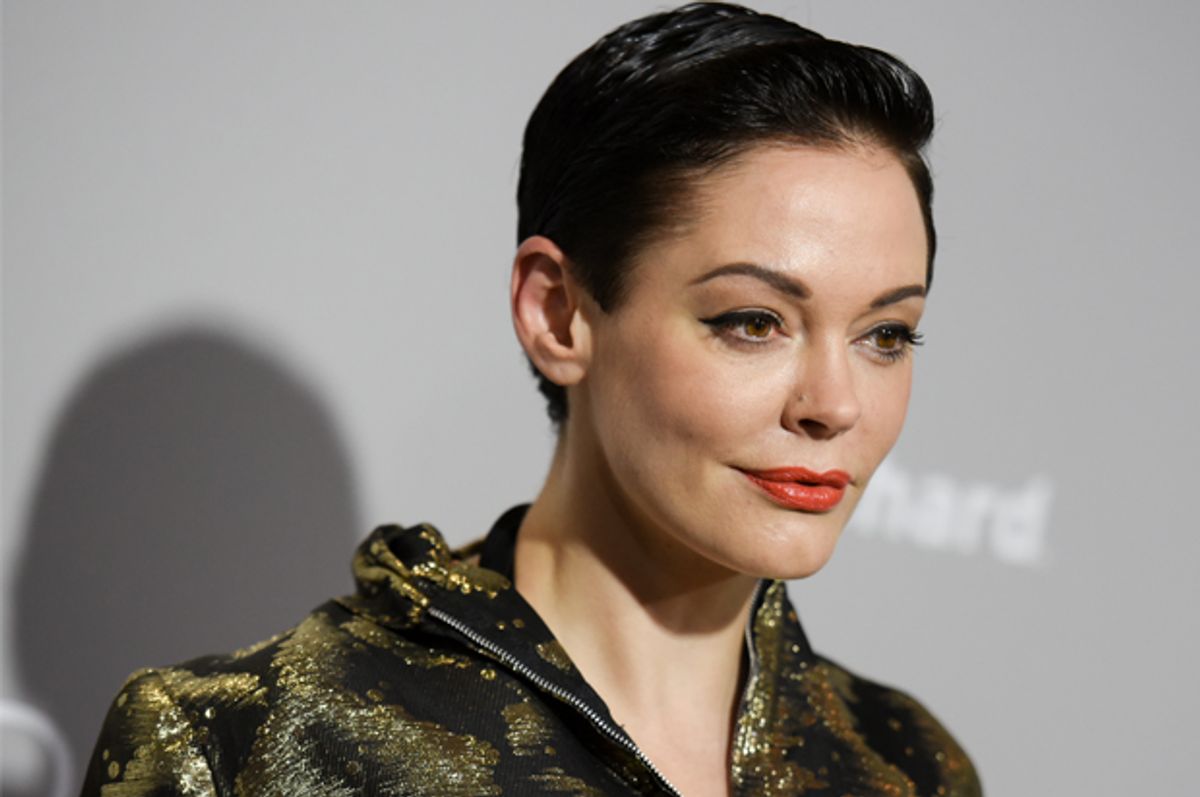 Rose McGowan could be the poster woman for imperfect feminism. On the one hand, she's been an outspoken critic of Hollywood sexism. On the other, her track record with the LGBT community sure leaves something to be desired.

On Monday, the actress went on a tirade on Facebook in response to comments from one of Glamour's Women of the Year, Caitlyn Jenner, to Buzzfeed. Backstage at the event, Jenner had told reporters that "The hardest part about being a woman is figuring out what to wear. It’s always that way; I never thought it would come to this. I had really no sense of style." But she added, "It’s more than that. I’m kind of at this point in my life where I’m trying to figure this womanhood thing out. It is more than hair, makeup, clothes, all that kind of stuff. There’s an element here, that I’m still kind of searching for. And I think that’ll take a while. Because I think as far as gender, we’re all on a journey. We’re all learning and growing about ourselves. And I feel the same way."

This apparently did not sit well with McGowan, who has taken umbrage with the issues around women and wardrobe and image before. In August, she tweeted a "note that came w/script I got today. For real." The directive called for "Black (or dark) form-fitting tank that shows off cleavage (push-up bras encouraged). And formfitting leggings or jeans. Nothing white." McGowan added, "name of male star rhymes with Madam Panhandler hahahaha I die." Soon after, the 41 year-old actress claimed she was let go from her agency, with a brazenly bridge-burning announcement that "I just got fired by my wussy acting agent because I spoke up about the bullshit in Hollywood. Hahaha. #douchebags… The awesome thing about being an artist? You can't be fired from your own mind. #FREEDOM." And in September, she hosted an art show and fundraiser for the East Los Angeles Women's Center. She said at the time, "These women that came before us suffered, and if all we can do is put a hashtag on Twitter, I think we can do more. I think we need to do more."

After getting wind of Jenner's recent comments, McGowan apparently felt similarly fired up to do something, and took to Facebook. The post has since been deleted, but CNN reports it read, "Caitlyn Jenner you do not understand what being a woman is about at all. You want to be a woman and stand with us – well learn us. We are more than deciding what to wear. We are more than the stereotypes foisted upon us by people like you. You’re a woman now? Well f__king learn that we have had a VERY different experience than your life of male privilege. Woman of the year? No, not until you wake up and join the fight. Being a woman comes with a lot of baggage. The weight of unequal history. You’d do well to learn it. You’d do well to wake up. Woman of the year? Not by a long f__king shot."

ET reports that "The star then posted a series of graphic memes with quotes from Jenner, 66, including a woman being raped, a woman giving birth and a woman being followed at night. She even went as far as to share a meme of Nicole Brown Simpson (Jenner’s ex-wife, Kris Jenner’s, best friend) covered in bruises."

Several observers, including New York magazine, called her commentary "transphobic." And the actress does have an uneasy history of putting her foot in it on certain issues. A year ago, while appearing on Bret Easton Ellis’ podcast, McGowan said, "You wanna talk about the fact that I have heard nobody in the gay community, no gay males, standing up for women on any level? … I see now basically people who’ve fought for the right to stand on top of a float wearing an orange Speedo and take Molly. … Gay men are as misogynistic as straight men, if not more so. I have an indictment of the gay community right now, I’m actually really upset with them." She later walked back the remarks, saying, "I made a dumb generalization, and for that I apologize."

On Tuesday, McGowan gave a similarly shrugging mea culpa, tweeting, "I guess I can be a little intense sometimes. Oh well. F__k it." She soon added a clarification of her remarks, saying, "Let me take this moment to point out that I am not, nor will I ever be, transphobic. The idea is laughable. Disliking something a trans person has said is no different than disliking something man has said or that a woman has said. Being trans doesn't make one immune from criticism…. I'd be thrilled to fight alongside Caitlyn Jenner. I just want her to know there is a monumental fight to be had…" Doesn't seem to include an actual apology, or an acknowledgment that surely being a trans woman has been no picnic of "male privilege" for Jenner.

Of course trans persons and gay people and regular old cis folks are not immune from criticism because of their gender identity or sexual orientation. But does anyone who's followed Jenner's story believe she was being entirely serious when she said the hardest part of being a woman is what to wear? And if you did, did you get the part where she clearly said being a woman is "more than hair, makeup, clothes"? If there's anyone who could use some educating in this whole episode, it's not Caitlyn Jenner. And though there is indeed a "monumental fight to be had," I'm sure she doesn't need Rose McGowan to school her on how to do it.