Katniss meets the new boss: The Tea Party, the Bolsheviks and the "Hunger Games" finale 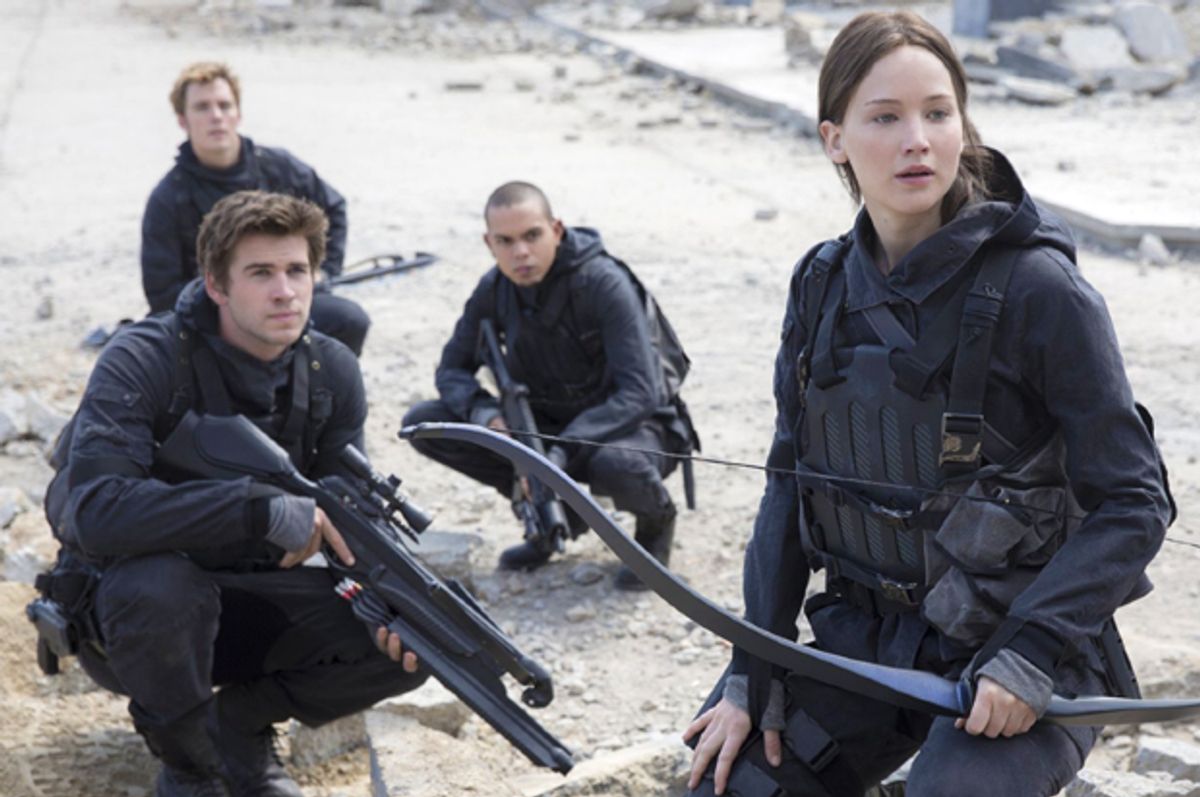 Any time you get one of those Hollywood movies whose title involves an incomprehensible sequence of words and too many punctuation marks – “Master and Commander vs. Top Gun III: The Kingdom of the Harvest Quickening – Part 3 of 3” – it arrives with a predictable set of strengths and weaknesses. They don’t sink all that money into a franchise-capping picture expected to dominate the global box office for weeks without pursuing a certain degree of technical excellence, and “The Hunger Games: Mockingjay – Part 2” is no exception. Director Francis Lawrence’s concluding episode in the four-film series adapted from Suzanne Collins’ young-adult bestsellers is a suitably handsome and brooding wide-screen spectacle, with a modernist-industrial production design that reflects the influence of various 20th-century art movements.

But it’s also true that toward the end of a big series the story eats the stars, and everybody in this movie, even Jennifer Lawrence as Katniss Everdeen, the Artemis-style revolutionary icon, is pretty much part of the furniture. As the rebel alliance of the long-oppressed districts closes in on the decadent Capital of Panem (basically the post-apocalyptic United States), where the aging and tyrannical President Snow (Donald Sutherland) makes his last stand, Katniss is sent in behind the invading army – not to fight, but to make propaganda films. Which is funny, right? Because, see, we’re actually watching her in a movie! OK, you got that part. And “Mockingjay – Part 2” is itself a kind of propaganda film. But propaganda for what? There, my friends, is the rub.

We’ll come back to that. As for the story Francis Lawrence tells (he is Austrian and no relation to Jennifer Lawrence, but dude, that’s confusing; change your name or something) – well, it’s way more obviously about the Bolshevik Revolution, and/or Edmund Burke’s critique of the French Revolution, than any of the “Hunger Games” narrative up till now. No, wait, dammit -- I said we were coming back to that. What I meant to say is that this movie jams in almost every detail from the second half of Collins’ final novel, which I guess is not surprising since screenwriters Peter Craig and Danny Strong worked from an adaptation by Collins herself. “Mockingjay – Part 2” drops us right into the middle of the action and is often tense and exciting – there’s no point seeing this if you don’t know the previous films or the books! – but that overstuffed narrative eventually gives the film a dogged, draggy feeling the director cannot entirely solve. At 137 minutes, this is the second shortest of the “Hunger Games” films, but it plays longer than either of the previous two entries.

I think the central problem of the “Hunger Games” fictional universe is closely related to the sheer ingenuity of its construction. First Collins and then the filmmakers have dragged in every possible reference from apocalyptic science-fiction and Y.A. fantasy and classic cinema, so that the end result, however excitingly paced and capably delivered, feels boxed in and overdetermined. I mean, take your pick: This movie is a little bit “Star Wars” and a little bit “The Running Man,” or maybe it’s the love child of a three-way between “The Giver,” “The Matrix” and “A Wrinkle in Time.” When we turn to the real world and actual history, Collins’ inventiveness assumes an even more intriguing cast. As I have said in previous reviews of this series, her particular brilliance lies in writing books that already felt like movies, and also in her ambiguous positioning of Katniss and her rebellion against the sadistic, caste-divided regime of President Snow and the Hunger Games. It’s an anti-elite revolution, but of what kind?

I’ve gotten impassioned emails from Tea Partyers after every one of these movies, arguing that Collins is on their side and that Katniss stands for individual freedom and self-government, standing up against the effeminate, totalitarian aesthetes of the Capital. Liberals or leftists are of course free to view the “Hunger Games” universe as an Orwellian deep future ruled by the Koch brothers (big supporters of the arts!), in which the arrogance of the 1-percenters finally pushes the enslaved masses too far. I make no argument about who’s right – in case you hadn’t noticed, this is fiction, and everybody gets to be right. My point is that Collins deliberately avoids picking sides or clarifying the picture until it’s too late, and in the final chapter winds up ticking “All of the Above” and delivering a series of highly familiar nostrums. Did you know that power corrupts, and absolute power blah blah blah? Did you know that violence begets violence, that revolutionary regimes often outdo the savagery of the rulers they overthrow and that those who live by the sword something something? Me neither.

As I implied earlier, the zealous and monochromatic revolutionary movement led by insane ice-queen Alma Coin (Julianne Moore), easily my favorite character in this series, here acquires a distinctly Leninist or even Maoist flavor. Like Bolshevik mastermind Leon Trotsky, Alma believes that true revolutionaries don’t have the right not to kill people, and that any degree of mayhem and terror is more than acceptable if it helps usher in the new era. Katniss’ role as the star of “propos,” on the other hand, suggests the heroic workers and soldiers hand-picked by Stalin to serve as symbols of the people’s struggle in the Great Patriotic War (aka World War II). I wouldn’t accuse Collins of going squishy on President Snow, exactly, but in Sutherland’s masterful portrayal, Katniss’ great nemesis assumes more human dimensions, an aging lion who is endlessly impressed by the unquenchable Girl on Fire, and who knows his time is just about up.

Jennifer Lawrence hasn’t lost her mojo as this series has dragged on, and remains a magnetic presence every second she’s on-screen. But “Mockingjay – Part 2” doesn’t really give her much to do. Katniss spends much of the film creeping through the sewers of the capital, Jean Valjean-style, on a mission so secret that everybody knows about it, including Snow, Coin and Plutarch Heavensbee, the Machiavellian gamemaker turned revolutionary played by Philip Seymour Hoffman. Hoffman’s role was largely completed before he died, but for obvious reasons he’s not in the movie as much as he might have been. Other characters arguably more interesting than Katniss and her warring boyfriends, including Woody Harrelson’s Haymitch, Jena Malone’s Johanna and Elizabeth Banks’ Effie Trinket, barely appear at all. Several people we are supposed to care about get eaten by zombies. I didn’t know there would be zombies.

As for Katniss’ love triangle with childhood sweetheart Gale Hawthorne (Liam Hemsworth) and former Hunger Games partner Peeta Mellark (Josh Hutcherson), it's more perfunctory than ever, at least to my taste, despite the delirious level of melodrama. (I will acknowledge that I am not in the key demographic for this movie.) Peeta has been tortured by Snow, dosed with tracker-jacker venom and turned into a psychotic killer, while Gale becomes Alma Coin’s leading military strategist and pretty much a war criminal. Smart women, foolish choices! In its last scenes “Mockingjay – Part 2” fizzles out completely, but at least two different dictatorships have been overthrown and replaced with – well, something else. If history is any guide New Panem will have to fight a civil war to figure out what that other thing is, and even that won’t settle anything.