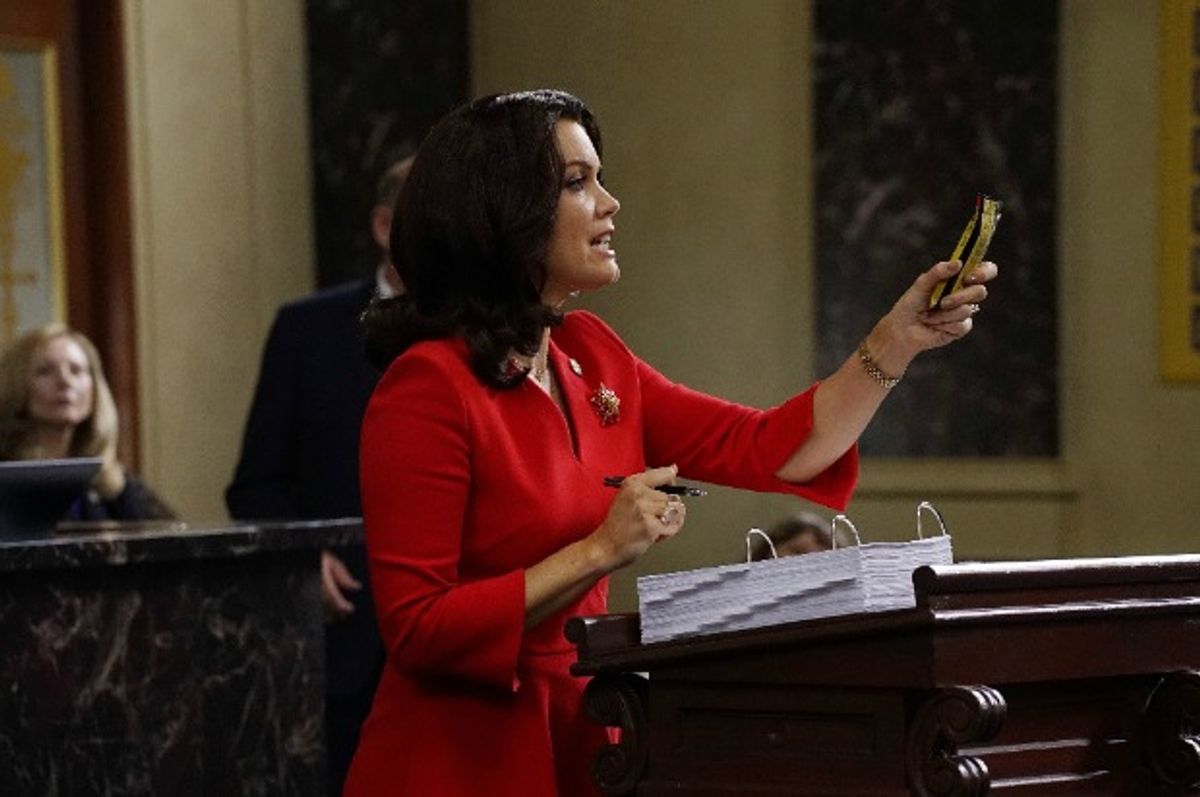 Say what you will about last night’s winter finale of “Scandal,” “Baby, It’s Cold Outside”—I found it a little sloppy—but on the issues, it’s magnificent. And pointed: That title is macabre, given that we watch Olivia Pope (Kerry Washington) go to a deserted clinic on Christmas Eve to undergo a first trimester abortion. A machine vacuum aspiration uses suction to withdraw fetal tissue. Baby, it’s cold outside, indeed.

The episode was, first and foremost, about women—and contrasted the former first lady and her three children with Olivia and her lack of any. The two women are not just compared, though—they join forces, too. Melanie Grant (Bellamy Young) impulsively decides to filibuster a line item in the Oval-Office-approved spending bill so that Planned Parenthood—the Planned Parenthood, not a made-up nearly named nonprofit that does some of the same things—isn’t relegated to discretionary funding for the next year. It’s a granular budget distinction that even most pro-choice Americans wouldn’t know to fixate on, which is why Rhimes is making the most of it—drawing on Texas State Senator Wendy Davis’ famous filibuster in the summer of 2013. So the episode indulges in high bureaucratic drama for Mellie’s, with a last-minute savior (in the form of the vice president) and a countdown to midnight. Olivia, behind-the-scenes, sends help and gives pep talks, and by the end, her own righteous indignation on the topic leads her to break up with her high-powered boyfriend in favor of drinking wine and eating popcorn on her couch.

Politically, there are some plotholes. Shonda Rhimes, the showrunner and creator of “Scandal,” has no problem with shifting the political persuasions of her characters to best suit her mood. In this case, a Republican junior senator turns out to be pro-choice, and though it should be completely rational, it is not, as the measure of debate in this country has indicated, entirely plausible. Moreover, budgets are tied to the fiscal year, not the calendar year, and Mellie’s ability to wear her high heels for even 20 minutes of that 16-hour filibuster really challenges the imagination. But Rhimes is writing her fantasy of how people should be, just as often as she writes her horror at who they settle for being.

And nowhere is that indignation more directed than at Fitzgerald Grant (Tony Goldwyn), who demonstrates his lack of moral fiber on the topic of reproductive rights by saying nothing. It’s not because he doesn’t believe in a woman’s right to choose; it’s because he just doesn’t care that much about it. And the women around him silently and not-so-silently begin to implode with their repressed rage.

With Olivia, that rage comes out in the form of tight-lipped silence. The scene where she undergoes the procedure is merciless. Rhimes’ lens examines the surgical steel implements—more suited to torture than healthcare—and the sterile, gloved hands of the doctors. The audience has no warning for what’s to occur until the procedure starts, and then, as the vacuum is turned on, the camera focuses on Olivia’s face, resolute but pained, and her hand, as she reaches out to grasp the side of the stretcher. I wrote yesterday that much of this half-season of “Scandal” has boiled down to Olivia’s choices, in terms of white hats or tiaras. There is no clearer encapsulation than this choice over her own body, in an episode where lover and father and ex-lover are all quarrelling over whatever pieces of her are left for scraps.

More than simply a message about abortion—including the revolutionary act of showing the procedure on broadcast television—“Baby, It’s Cold Outside” is one about women going against the grain. Mellie chooses to filibuster; Olivia chooses an abortion; Susan Ross (Artemis Pebdani) chooses a Christmas present for her crush. The most tragic moment of the episode isn’t Olivia’s abortion; it’s when Fitz chooses her dress for her, before a social event, and Olivia quietly acquiesces. Choice matters, is what the episode seems to say. And the women of “Scandal” are choosing their own way.