"It's unacceptable to give religious privilege only to those who believe in the supernatural": The Satanic Temple challenges the religious right 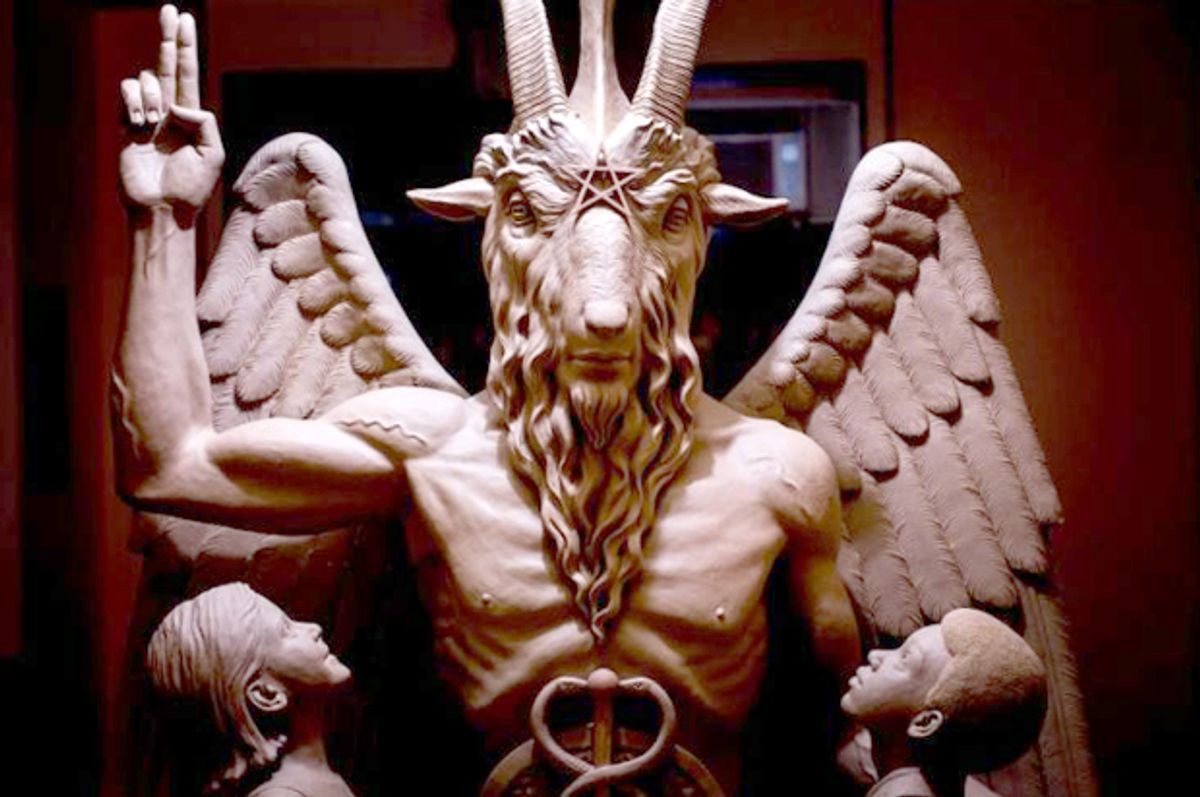 A small sect called the Satanic Temple has been giving the religious right fits by insisting that religious freedoms granted to Christians should apply to Satanists too. Is the group smart political theater or real religion? Both, says Temple co-founder and leader Doug Mesner, aka Lucien Greaves.

In Orange County, Florida, members applied to give out Satanic Coloring Books alongside Christian propaganda being distributed in Florida elementary schools by a group called World Changers. For three years, the school board had ignored complaints about the World Changer materials, but after the Satanic Temple applied to distribute its own child-friendly materials, the practice ended.

According to Greaves, “At first they tried to allay the fears of the public by saying they reserved the right to reject material if it wasn’t fit. They hoped our children’s activity book would violate community standards so it could be discarded without blatant discrimination. But our book has simple pro-social messages. When we gave that to them, they were utterly resigned. Their law was saying there was nothing they could object to. So they closed down the forum entirely.”

When the state of Oklahoma decided to display a version of the Ten Commandments, carved in granite, on courthouse grounds, members of the Satanic Temple again treated this as an open forum for religion in the public square. They raised $28,000 in crowdfunding and hired a sculptor who created a 6-foot bronze monument depicting the Satanic avatar Baphomet blessing two children, with the Temple’s seven precepts below. The finished statue was unveiled in a dramatic ritual in Detroit last July.

The list goes on: In Western Washington, Temple members seized an opening created by a Christian coach who was leading football prayers in his public capacity on public school grounds. Members of the Seattle temple asked that they, too, be allowed to lead after-game prayers on the field. The school district responded by suspending both the coach and the prayers but not in time to prevent footage of black-robed Satanists and jeering Christian students from hitting national media.

In Missouri, the Temple has waded into the reproductive freedom fight by filing suit on behalf of a member, “Mary Doe,” who says she is entitled to religious exemption from odious abortion restrictions. The Temple’s “Seven Tenets” include two that provide the basis for the court case: One’s body is inviolable, subject to one’s own will alone—and—Beliefs should conform to our best scientific understanding of the world. Lawyers for the Temple argue that forcing Doe to read scientifically bogus warnings against abortion (for example, that abortion causes cancer) and then contemplate the warnings for three days prior to the procedure violates her religious freedom. Once again, the Temple is crowdfunding the campaign and to date has raised about half of the anticipated $80,000 in legal costs.

We’re not trying to destroy religious privilege and exemption; we are coming at it in a way that we can find a legitimate plateau on which religious privilege can work in a pluralistic society. During our Oklahoma campaign to place our statue of Baphomet alongside the Ten Commandments, people kept asking what were we looking for? What was our preferred outcome? For the Ten Commandments to come down or ours to go up? But either one of those outcomes was OK with us. What we were fighting against was that one perspective enjoyed the power of state government. We were just fighting against the worst-case scenario—that the Christian point of view had a preferred place in a government institution.

I’m not sure that people can make the appeal that because of deeply held beliefs they shouldn’t be held accountable to laws. But the courts need to be prepared to acknowledge that if they can, then a diametrically opposed claim can also be made on the basis of sincere belief.

Are the beliefs of the Satanic Temple really sincere, though? And given that members don’t ascribe to any form of supernaturalism, can they actually be called a religion? Greaves insists that the answer is yes on both counts.

Those who dislike us claim that we are not really a religion, but by what standard? These things beg for definition. In the Hobby Lobby case, there was no sincerity test at all, and no test that their exemption had some kind of spiritual basis. How could they relate the Bible to this idea that a corporation doesn’t have to pay for insurance for employees who then make their own choices about pregnancy? So, you have to wonder what kind of test they can possibly put to assess the religious or spiritual legitimacy of the Satanic Temple.

In regard to our atheism, if you have a society that grants religious privilege and exemption and you’re willing to give privilege and exemption to certain groups, then it’s unacceptable to give that only to people who believe in the supernatural. We are openly atheist but we have cultural identity and symbolic constructs that are deeply meaningful to our members. There are other atheistic religions in human history, from Jainism to Buddhism to Confucianism. . . . The litmus test should be: Is this something put forward for an individual’s personal convenience or does it speak to some communities’ deeply held beliefs such that if the government impinges on that in some way it affects their sense of cultural identity?

Greaves argues, in fact, that his litmus test is the only one that is constitutionally feasible in the U.S. or in any pluralistic nation that claims to treat religious perspectives equally. As evidence of sincerity, he points out that even when butting heads with Christian right opponents, Temple spokespersons seek to advance their own affirmative values, not merely to criticize other perspectives.

Lilith Starr heads the Seattle chapter of the Satanic Temple, a group with about 50 members and weekly meetings. She describes her role in the Temple as an act of spiritual service. Starr studied Buddhism, which she sees as aligned with Satanism in that the highest value in both is compassion. Starr still meditates daily, but she likes the fact that Satanism encourages more active engagement in social justice: “Personally, the figure of Satan is a powerful symbol of standing up to unjust authority for yourself and for those around you. To me, he is a figure of compassion. Fighting against the rage and jealousy of an unjust god or against an unjust government authority. He is fighting for the people. He represents liberation.”

Although both Greaves and Starr see their political engagement as an expression of their own religious values, they give the Christian right credit for activating them and for getting out the word about Satanism as a legitimate spiritual path. Without the Hobby Lobby case, Starr might have maintained a more solitary spiritual practice rather than stepping into the visible leadership position she holds today.

Greaves says the Satanic Temple owes much of its growth to the Liberty Counsel, a Texas legal group working to insert Christianity into public life via “religious freedom” claims. “We came into this with no resources, no funding. We’ve gotten this far on the dime of the Liberty Counsel that have opened the doors so wide that they can’t prevent us from walking in now. . . . Ironically if they would keep their stuff out of the public sphere that would be to their advantage, because we don’t have the real estate they have. When they open up a public forum, they do so to our advantage—to the advantage of minority religions. Who would have heard of us if it weren’t for idiots at the Liberty Counsel? We should send those assholes a thank you.”