"Master of None" tackles the empathy gap: How nuanced minority stories can shrink the emotional gulf between white Americans and "others"

Western media coverage of the Paris terror attacks outweighed others. What if we can change what audiences want? 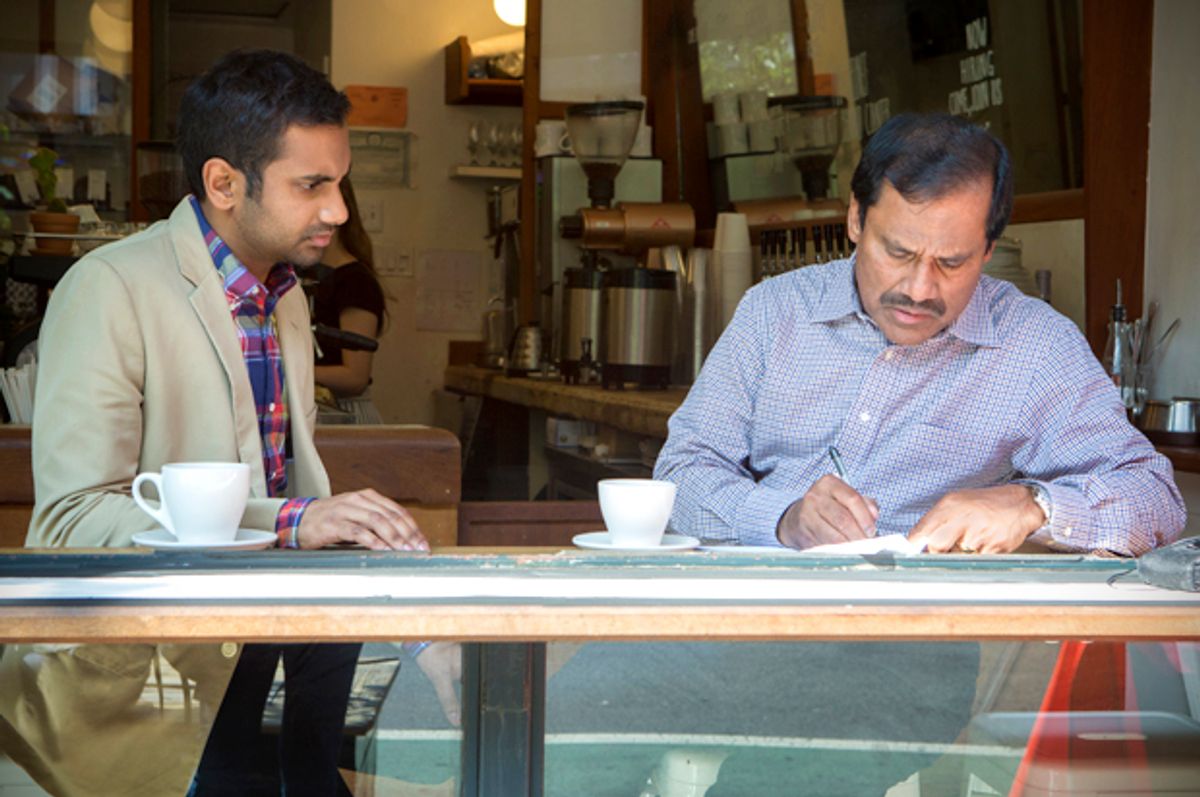 Aziz Ansari and Shoukath Ansari in "Master of None" (Netflix/K.C. Bailey)
--

Amidst an ongoing conversation about diversity in media, questions about what, precisely, constitutes fair representation arose over the last week from an unexpected and tragic place. In the wake of terrorist attacks in France, many asked why the mass slaughter of civilians in Lebanon the day before or Nigeria the Tuesday after (or in the six non-European sites which faced deadlier terrorist attacks this year), wasn't given similar coverage. The implication was that media attention skewed in the direction of lost white lives.

Some overly defensive members of the press refused to concede even the premise. The problem was not that journalists were not covering Middle Eastern and African deaths, many a journalist insisted, but that people weren't reading (and subsequently sharing) stories about them. These underappreciated news items were and would continue to be available for those who sought them out. The bias, however, is readily apparent once we expand the definition of “media” beyond foreign news bureaus. The point was that even the least engaged consumers knew about the attacks in Paris: late night hosts paid tribute to the city, Facebook offered convenient functionality which allowed users to watermark their profile pictures with French flags in solidarity, and, as I write, though Boko Haram has ouptaced ISIS as the world's deadliest terror group, Paris retains higher billing on the homepages of most major news sites. The complaints weren't about the news people found, but the news that found them.

Most thoughtful grapplings with the subject conceded a media bias, but explained the discrepancy by pointing to the strong connection many Americans feel to Paris. It is true that the United States has deep historic and cultural ties to France, but not readily apparent that these ties ought to translate to a heightened emotional bond. That such deaths are a rare occurrence in Paris but more common in more turbulent regions, another common refrain, ought only to intensify our concern and sense of injustice. But admittedly limited coverage of terrorism in Africa and the Middle East tends to be met with indifference at best. The media serves as a funhouse mirror, reflecting back a biased picture that then further warps our perspective.

A more celebratory conversation was, meanwhile, taking place on other corners of the Internet. Calls for greater representation of minorities in scripted television have grown louder and more prominent this year. "Master of None," a new series from "Parks and Recreation" veterans Aziz Ansari and Alan Yang, has been a welcome entrant to the dialogue since it premiered on Netflix earlier this month. The show itself openly plays with these issues, but its stars and creators have also been refreshingly candid and outspoken about the industry's deeply-ingrained racism and their very active and conscious efforts to counter it.

In interview after interview, the "MoN" creative team has stressed the importance of not just more roles for minority actors, but different kinds of roles — ones that reject tokenism and singularity and instead embrace greater sophistication and variety. Scripted television is, perhaps, best-suited for these fleshed out portrayals because, in the same way that the segmented structure of cable news rejects complexity, the medium demands it. It is astonishingly difficult to retain audience interest in flat characters over a long time frame, and even minority characters who embody trite stereotypes tend to attract sympathy and offer something of an emotional inner life.

It is, then, understandable that in his activism, "MoN" co-creator Ansari, who plays the show's protagonist Dev, has drawn from his own experiences. Writing in the New York Times, he describes the alienation he felt as a child, when the only on-screen Indians at his reach were cab drivers or convenience store workers. Here, he's echoing a point made in "MoN," when in an illustratively short montage a young Dev is blasted with cultural portrayals of Indians, featuring Apu from "The Simpsons" and the monkey brain-eating villain of "Indiana Jones." Ansari closes his Times piece with an appeal to the marketability of minority actors in leading roles. “You know what? No one really cares,” he writes.

Speaking with Salon television critic Sonia Saraiya, fellow co-creator Alan Yang makes a similar point. Describing one of the show's most hard-hitting episodes, wherein Dev and his Asian-American friend learn about the struggles of their immigrant parents, Yang said, “It’s really not just a story about immigrants. It’s a story about being grateful to your parents, no matter what their background was. Regardless of where your parents are born, chances are they made some sacrifices for you and they took care of you and they worked really hard.”

Both Ansari and Yang are right about the formative impact which on-screen diversity, or lack thereof, has on young minority viewers. And Yang is also right to note that certain aspects of "MoN," and shows furthering similar goals, speak to our commonalities. It is also fair to say that Ansari and Yang's discussions of these matters must serve strategic ends: If greater diversity can cultivate a passionate following amongst minorities, while others are indifferent to who plays these universal roles, Hollywood stands only to gain from diversifying its casts. (The two are also up against accepted industry wisdom, similar to that spouted by members of the press last week, that most viewers simply aren't vested in stories which don't relate directly to their own experience.)

But it's important not to lose sight of the fact that the benefits of diversity extend beyond the minority community. Yang is correct that most parents sacrifice for their children, but the fear of picking up the phone lest people mock her accent, described by Dev's mother, is not universal. Nor, when "Fresh off the Boat" premiered last year, was protagonist Eddie Huang's shame and embarrassment when white classmates mocked his traditional Chinese food. First- and second-generation immigrants benefit from seeing these stories on screen, but it's also a teaching moment for all audience members. Viewers might think of these characters before imitating a foreign accent for laughs or mocking “ethnic” cuisine. They might understand others' sensitivity around this brand of humor, or even speak up when such jokes are told in their presence.

Television's inherent progressiveness stems from its ability to draw us into unexpected narratives. When told compellingly, they serve as a recurring reminder that people who don't think, behave or — increasingly, importantly — look as we do still feel as deeply all the same. It broadens the scope of our empathy.

In an increasingly global community where an empathy gap still demonstrably looms large, sophisticated minority portraits and an abandonment of the notion of white as default can help to close it. We might draw upon this empathy when we read and share the news, and editors, writers and commentators might do the same when they cover it. The process might become more equitable, the media's portrait of reality more broadly reflective of it, less distortive and more enlightening.