"They're like subway panhandlers. Excuse me for bothering you. I'm not a drug addict...I am running for president" 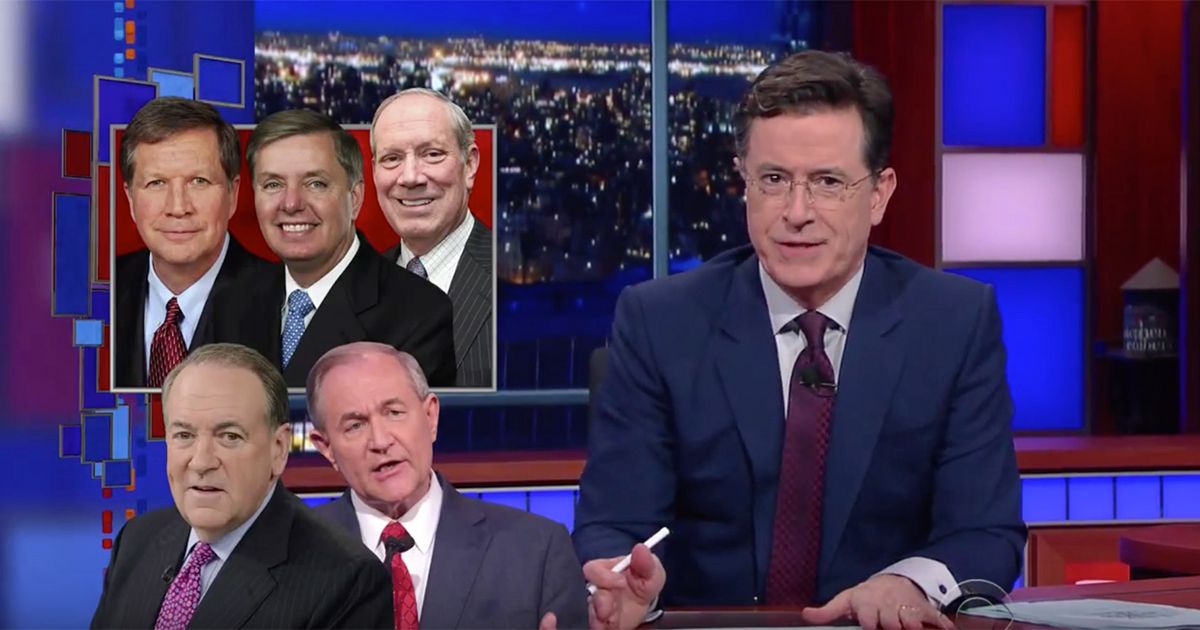 Federal election law requires that all candidates get equal time when it comes to broadcasts. So, Donald Trump's appearance on "Saturday Night Live" is raising some ire with his fellow candidates who want their shot to be funny too. According to the FEC "...qualified candidates are entitled to the same quantity, day, part and price as their opponents' for television broadcasts." No word yet on what exactly a "qualified candidate" is in the GOP field.

Colbert said that these five men are desperately trying to force Americans to look at them. "They're like subway panhandlers. 'Excuse me for bothering you. Ladies and gentleman, I am not a drug addict, however, I am running for president. If you can find it in your hearts to spare a small donation of the legal limit of $2,700 I promise I'll use it to find a good job in Washington, D.C. Thank you. God bless. And now... doo-wop.'"

According to the demands, these five candidates are asking for 12 minutes and 5 seconds of airtime, which is what Trump got on "SNL." While it might seem crazy, there's actually precedence for this. Back in 2004, Rev. Al Sharpton hosted "SNL," "so rival candidate Joe Lieberman got NBC to cough up 28 minutes which he used to broadcast reruns of a Lieberman town hall meeting."

Fearful he would have to have all of these crazy people on his show, Colbert checked with his lawyers at CBS who told him that the rule only applies if you're saying something positive about the candidates. "It's like the old saying: If you can't say something nice... you're good," Colbert said with a thumbs up.

The rule has also never been applied to anything lasting more than four seconds. "So I can get away with something positive about Ohio Gov. John Kasich if I keep it short like, 'Gov. John Kasich looks like he might be good at bowling!'" Colbert said while a countdown clock ran.

Apparently you can also say whatever you want as long as you don't show the candidate's likeness. So if Colbert wanted to say something nice about Ben Carson he could do it under a photo of a sleepy otter. "Or, in the case of Christ Christie: the Mucinex man. Or for Hillary Clinton, I could use an image of Bill Clinton, but not as much as she'll use it next year." For Trump, Colbert plans to use a fire hydrant, for Sanders he'll use Gargamel from the Smurfs, and for Jeb Bush, a burning dumpster.