My doctor told me it was all in my head; I might have died if I'd believed him

My doctor thought my symptoms were psychosomatic because I'm a woman. The real tragedy is how often this occurs 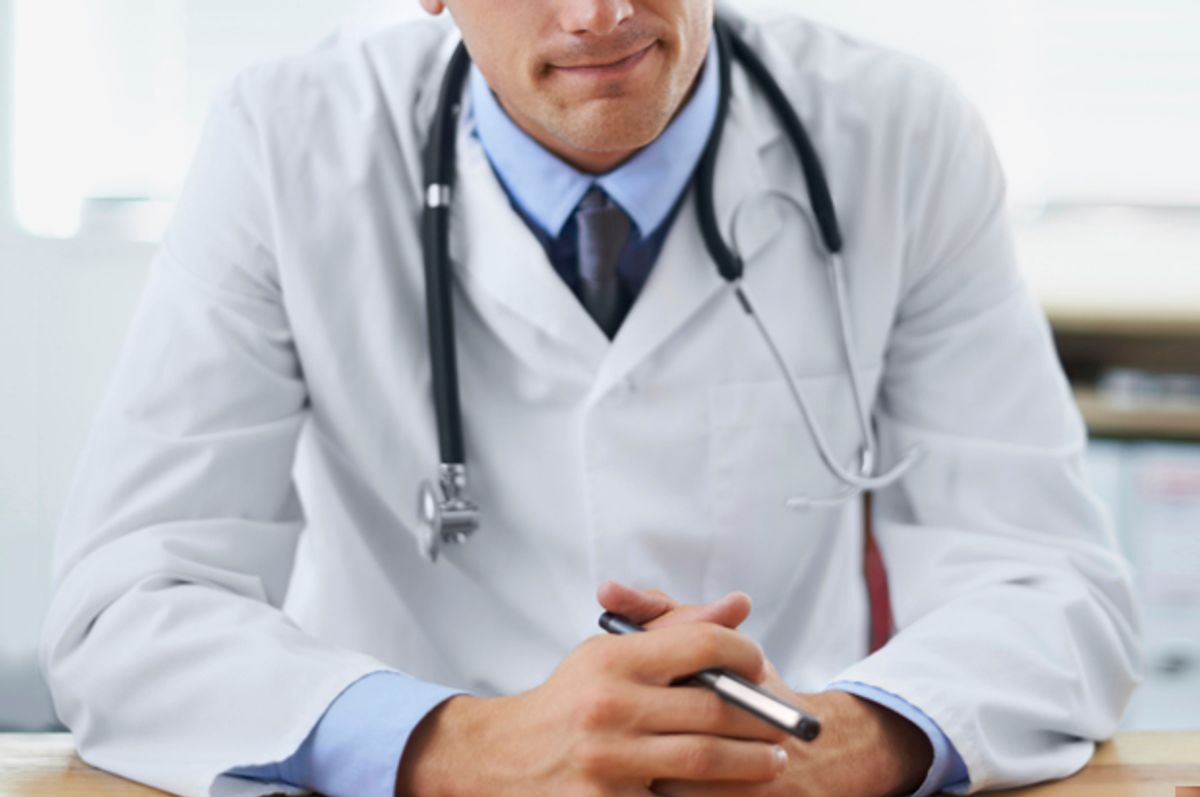 It was February, the air was frigid, and the streets were filled with dirty gray slush. I was visiting my endocrinologist. Five months earlier I’d been diagnosed with a relatively common autoimmune disease called Hashimoto’s thyroiditis. Basically my immune system had decided, for reasons unknown, to attack my thyroid as if it were an invading pathogen. The ensuing carnage sent my thyroid (a gland that helps regulate metabolism, growth, development and body temperature) into petrified spasms of dysfunction, alternately flooding my system with an overdose of hormones or refusing to produce any at all. In practical terms this meant my symptoms seesawed between two extremes: depression, lethargy and lack of appetite when my thyroid wasn’t working well, and anxiety, insomnia and weight loss when it was working on overdrive. When my endocrinologist told me I could solve the problem by taking a synthetic thyroid hormone to balance out my system, I happily complied.

What the doctor didn’t tell me was how long it might take to regulate my dose. The body is extremely sensitive to thyroid hormones; supplemental doses like the one I take are measured in micrograms, a unit of mass equal to one millionth of one gram. Take too much or too little, and the body reacts negatively. I’d started to understand this as I learned to monitor my symptoms. I could often tell before visiting the doctor for a checkup whether I needed an adjustment to my dose. And so when I went to see him for my third visit and explained I’d been feeling abnormally depressed and tired, I fully expected he’d say I needed to increase the amount I was taking. Instead he referred me to a psychologist.

“Everything is fine with your thyroid,” he told me, before my blood sample was even sent to a lab for analysis. “You’re just stressed from being in grad school.”

A week later I got a call from the doctor’s office. My lab results were back. The doctor wanted me to increase my dose of medicine. Within a few days of changing the dose, all my symptoms vanished.

As frustrating as it was to have my physiological symptoms dismissed as pyschosomatic, the real tragedy is how regularly this bias occurs. Study after study has shown that women’s symptoms and their pain are more likely to be downplayed or dismissed outright by physicians than similar complaints voiced by male patients. In a study on physicians’ approaches to performing cardiac exams on patients, researchers found that doctors were less likely to perform all five components of a cardiac physical exam on women than on men. Another study found that among severely injured patients, significantly fewer women were directed to a trauma center by emergency medical personnel or physicians in non-trauma facilities. Women are three times less likely than men to receive a knee replacement, even when the clinical conditions are the same. Women are more likely to be prescribed psychoactive drugs than men, and more likely to be told their complaints are psychosomatic – that it’s all in their heads.

Some might argue that women are different, anatomically and physiologically, which is true, but misses the point. Our bodies don’t need to be treated as if they were men’s bodies. We just need the same standard of care. We need doctors who don’t doubt our symptoms or dismiss our pain.

I decided to look for a new endocrinologist after similar versions of the same interaction happened several more times. But by that point I had learned to be suspicious. The assumptions this doctor had made about my mental and physical health forced me to confront a painful truth: that even though doctors have my best interest at heart, their unacknowledged biases would sometimes cause them to act against my best interest.

The power dynamic between patient and doctor is inherently skewed: patients must suffer with the daily implications of their sickness without knowing how to fix it, whereas doctors have all the knowledge of possible cures but no firsthand access to the symptoms. For a successful resolution, communication between both parties must be clear. More important, it must be bolstered by a solid layer of trust. If you stop trusting your doctor for any reason – because they doubt your symptoms, because they’ve failed you in the past, because they don’t seem to empathize with your pain – suddenly you lose control of your life’s narrative. You feel powerless and alone. There’s something almost unbearably discouraging about doing all the things you’re instructed to do (eat fruits and vegetables, exercise, get enough sleep) and still becoming chronically ill. Doctors are supposed to illuminate a path to wellness, but when they treat patients condescendingly instead of acting like the patient is an equal partner in the quest for health, they only serve to further diminish the patient’s sense of control.

Confusion over women’s health issues is nothing new. The Ancient Greek physician Hippocrates (often considered the father of modern medicine) believed many physical and mental ailments suffered by female patients could be attributed to the “wandering womb,” a condition in which the uterus literally floats around the body wreaking havoc. Then there’s the “hysteria” diagnosis foisted on women for centuries and treated with everything from smelling salts to jets of water blasted at a woman’s abdomen. Fortunately that bit of medical knowledge and those misguided treatments have been updated in the last century. But less easy to remove from the medical establishment are the social and cultural contexts that remain from hundreds of years of thinking of women as lesser beings.

The phenomenon is playing out right now in the American political arena, with debates about what a woman should and should not be allowed to do with her body taking center stage at almost every rally and debate. In this case the debate isn’t even based on science – it’s based on traditions and values and constraints that have been placed on women for centuries. It’s yet another attempt at stifling our autonomy and our control.

My experiences and the experiences of women like me are not meant to be an indictment of male doctors or all doctors or even politicians. They’re meant to be a critique of an ingrained cultural practice of reducing women to passive, complacent bystanders who are only granted autonomy in matters of our health when it relates to our weight or physical appearance. Everything else, it seems, is too complex to be left in our hands.

“Anything male is higher status in our culture,” says Dr. Molly Carnes, a physician at the Center for Women’s Health Research at the University of Wisconsin-Madison. “If our goal is to give the best medical care based on the clinical situation, you do not want these kinds of biases to interfere. They’re not relevant.”

Despite the inequity experienced by women on both sides of the examination table (female physicians are paid less than their male counterparts in all specialties), Carnes is hopeful that change is possible and even likely. She cited a number of strategies that have been shown, in experimental studies, to reduce a physician’s implicit biases, including practicing the right message and perspective making.

“If you remind yourself it’s really good for society that we’re all different, that it makes institutions better, rather than saying we’re all part of the human race and we’re all the same, you actually give less biased evaluations,” Carnes says. “Another one shows that if you just tell people we all have biases, it enhances their bias, it normalizes it. But if you tell people, we’re all working hard to overcome the influence of stereotypes, if you prime yourself with that message, that actually makes you give less biased evaluations.”

The key is changing the patterns of thought that physicians have about their patients. Recognizing stereotypes, embracing empathy, and welcoming multiculturalism will mean better care for all patients.

Perhaps this means it’s our turn to look at our doctors and tell them it’s all in their heads. But, we can add, the cure is in the same place.

Lorraine Boissoneault writes about travel, history, science and adventure for publications like Weather.com and JSTOR Daily. Her first narrative nonfiction book, "The Last Voyageurs," will be published in April 2016 by Pegasus Books.