The U.S.-backed coalition has utterly ravaged Yemen, yet Kerry applauded the UAE's role in the war during his visit 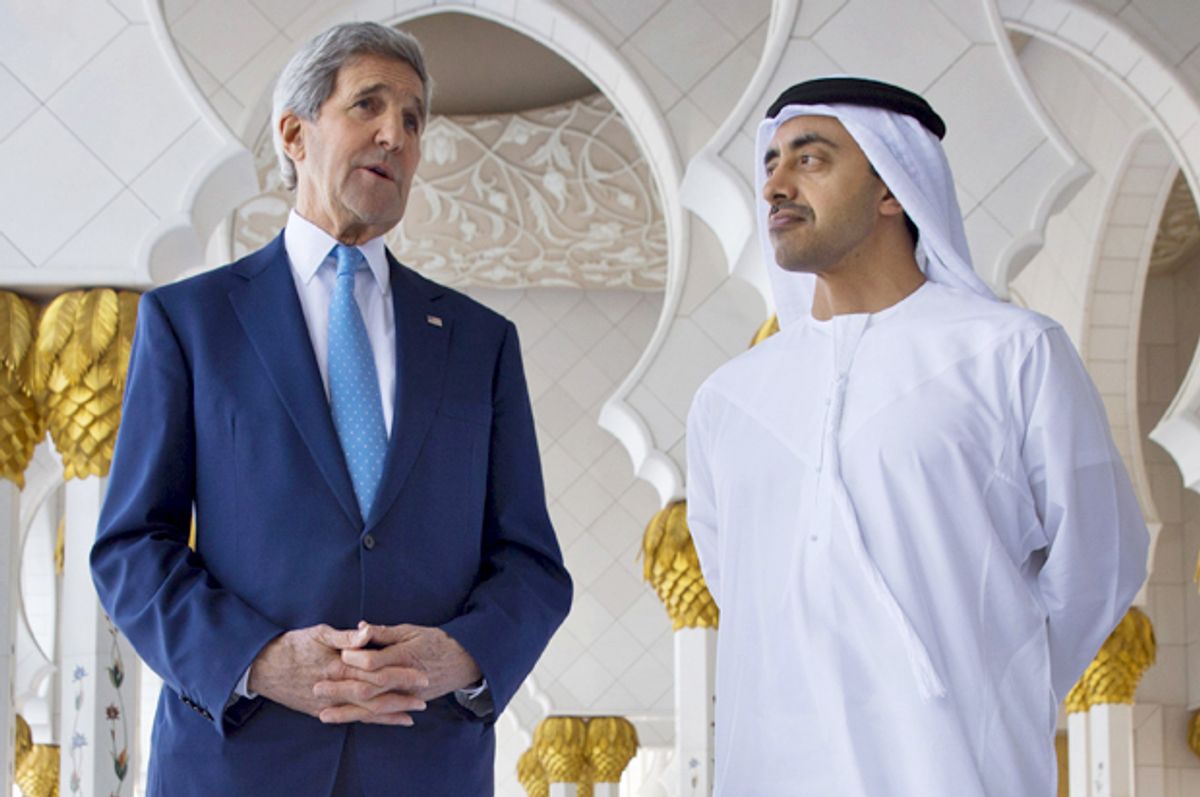 "War is peace, freedom is slavery, ignorance is strength" was the slogan of the totalitarian government in George Orwell's canonical novel "1984." We can now add another phrase to the dystopian motto: "Brutally bombing poor countries is helping 'accomplish significant progress.'"

Secretary of State John Kerry visited the United Arab Emirates (UAE) today to meet with Foreign Minister Abdullah bin Zayed al-Nahyan. The UAE -- a close Western ally with some of the world's largest oil reserves -- is a federation of seven absolute monarchies which base their laws on an extreme interpretation of Sharia (Islamic law). Although it tries to present itself as practicing a semblance of democracy, the roles of the UAE's president and prime minister are effectively hereditary in nature, passed down to the emirs of Abu Dhabi and Dubai.

The New York Times has described the UAE as "an autocracy with the sheen of a progressive, modern state."

In his trip Monday morning, Kerry applauded the monarchic, theocratic state for its work in the region.

"We respect what United Arab Emirates has been able to do to be able to accomplish significant progress in Yemen," Kerry said.

What exactly does Kerry mean by "significant progress"? He means the UAE has helped wage a destructive war on Yemen, the poorest country in the Middle East.

For the past seven months, Saudi Arabia has been leading a coalition of Middle Eastern countries -- armed by Western allies, primarily the U.S. -- that is raining bombs down upon Yemen. The Western-backed coalition, which seeks to reinstate President Abd Rabbuh Mansur Hadi, is fighting Houthi rebels, who have received some weapons and support from Iran, and fighters loyal to former President Ali Abdullah Saleh.

Hadi characterizes the Houthi rebels as puppets of Iran; the rebels, in turn, call Hadi the puppet of Saudi Arabia and the U.S. As president, Hadi approved and praised the U.S. drone war in Yemen, which has killed a large number of civilians, terrorizing and sometimes even radicalizing the population. The U.N. says American drones have killed more civilians than al-Qaeda militants, and many scholars, intelligence officials, and journalists have argued that the drone war in Yemen and elsewhere has only made violent extremism worse.

Although the coalition is led by Saudi Arabia, the UAE has played an important role. From the time the war began on March 26, the coalition has carried out regular airstrikes on targets in Yemen. In August, UAE troops escalated the conflict by essentially invading Yemen. Scores of Emirati soldiers have died in the on-the-ground fighting.

The U.S. media has been very quiet about the war overall, and American politicians have been even quieter. Yet the conflict has been catastrophic.

"We understand completely and support the reasons that Saudi Arabia and the UAE felt compelled to take acts of self-defense and to protect the security of this region," Kerry said. But is the UAE acting in self-defense?

Leading human rights organizations suggest otherwise. Amnesty International, Human Rights Watch, and more have accused the coalition of committing flagrant war crimes -- and have called on Western countries, namely the U.S., to stop providing Saudi Arabia, the UAE, and others with the weapons they are using to carry out these atrocities.

Around two-thirds of civilian deaths and property destruction have been caused by the Saudi-led coalition, according to the U.N. Amnesty International also noted that "more civilians have died as a result of coalition airstrikes than from any other cause during the conflict in Yemen." U.N. Emergency Relief Coordinator Stephen O'Brien added, "95 percent of the Yemeni people killed or injured by explosive weapons in towns or cities were civilians ... and more than half of all the air strikes occurred in towns or cities, often in densely populated areas, resulting in very high numbers of civilian casualties."

For more than half a year, an average of around 30 people have been killed every single day in Yemen. At of the end of October, the World Health Organization reported that more than 5,700 people had been killed, including at least 2,615 civilians and 573 children. Approximately 27,000 more were injured.

The coalition has bombed weddings, refugee camps, and humanitarian aid warehouses. At least 69 health facilities have been destroyed or damaged. The U.S.-backed coalition bombed a Yemeni Doctors Without Borders hospital. Earlier this month, the U.N. warned the "health and education systems in the country are on the brink of collapse."

"Eight months of conflict have had a devastating effect on all aspects of life in Yemen, with the health and education sectors the hardest hit," said the Head of Operation for the U.N. Office for the Coordination of Humanitarian Affairs. And natural disasters, including cyclones, have only exacerbated these already dire conditions.

This is what Secretary Kerry characterizes as "accomplishing significant progress."

Before the war began, more than half of Yemenis lived on less than $2 per day. Most people had little to no access to clean water. Now, coalition bombing has ravaged Yemen, and the Saudi-imposed siege has only further crippled the already impoverished country, which imported 90 percent of its food.

This is the "significant progress" of which the secretary speaks.