Colbert's ratings are down. Republicans are crowing they won't watch him. Indeed, they are afraid to be challenged 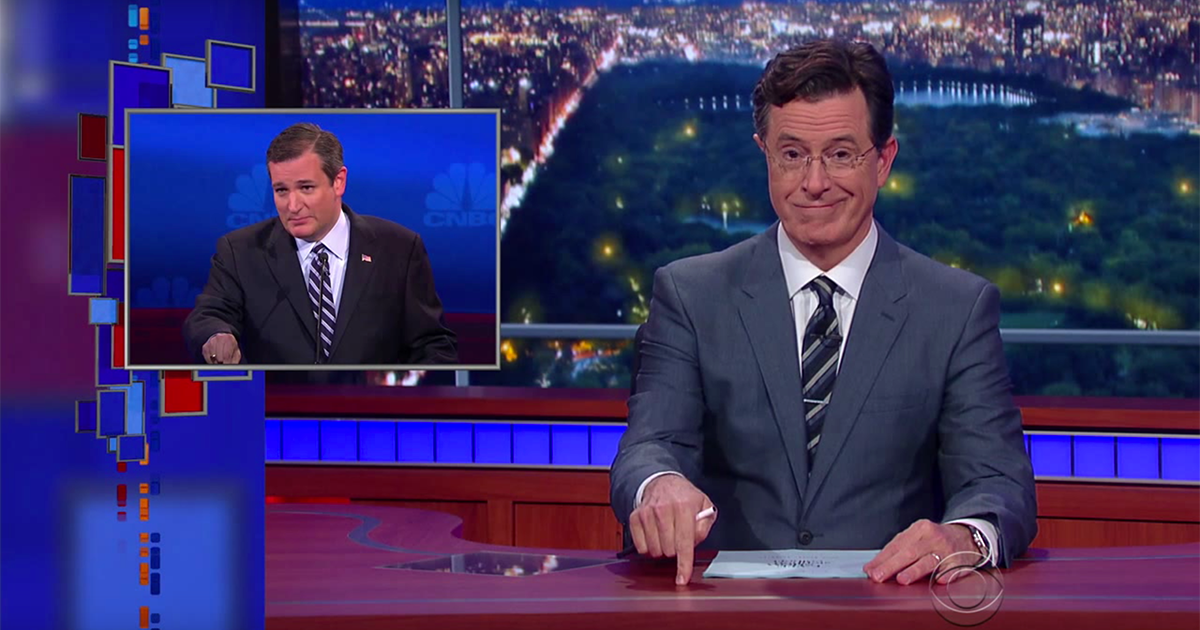 When it was first announced that Stephen Colbert would take over for David Letterman as host of “The Late Show”—both the right and the left complained.  The left worried that the end of “The Colbert Report” and his pundit persona would signal a huge loss for politically progressive satire.   The right argued that the choice of Colbert signaled that CBS was, to quote Rush Limbaugh, at “war on the heartland of America.” “CBS executives made it clear” however, “that they expected Mr. Colbert to broaden his appeal when he moved to the medium of late night on a network.”

At least that was the idea.

We now have data that paint a different picture.  First of all, despite a strong start, Colbert has now trailed behind his comedic competitors on ABC and NBC for two weeks running.  That is good news for ABC’s Jimmy Kimmel, who had held the No. 3 spot since Colbert took over.  NBC’s Jimmy Fallon remains comfortably No. 1 with approximately a half million more viewers than his closest competitor.

So what’s the catch?  Why has Colbert dropped in ratings?  Well, according to a poll published by The Hollywood Reporter, it seems that Colbert has a GOP problem.  Only 17 percent of Colbert’s viewers are Republican compared to 31 percent for Fallon and 33 percent for Kimmel.   While Kimmel is clearly the comedian that most appeals to Republican viewers, both he and Fallon have a fairly balanced split between parties.  Colbert, in contrast, does not.

Now for those of you who actually watch Colbert, this has to come as big news.  Colbert didn’t just shed his conservative blowhard pundit persona when he took over for Letterman—he also changed his comedy to fit in to the format.  First of all, he moved far more towards the variety show comedy of Letterman. He has great musical talent on the show every night.  He does silly jokes during his stand up every night. He gets a great menu of celebrity talent on every night.

Even within the format, Colbert made a number of shifts away from the comedy he did on “The Colbert Report” and towards the mainstream.  Now many of his interviews are just opportunities for celebrities to shill their next project.  And he softballs many of his political guests—as happened when he had Donald Trump on.  He also has a significant amount of bits that are just pure entertainment – goofy jokes that have no connection to the political satire that made him famous.

But, here’s the catch.  Colbert may have largely adapted to the genre, but he has also introduced elements into the genre that we have never seen before.   He has hosted guests like Supreme Court Justice Stephen Breyer and Tesla founder Elon Musk.  He had a heartfelt and intense interview with Joe Biden.  And he did a biting interview with Ted Cruz where he refused to allow the Tea Party candidate to rewrite history and spout lies.

He has also held on to his sharp satirical edge. Besides continuing to do a very Colbert Report-like segment where he regularly critiques the news media, he has also included brilliant satirical bits like “The Hungry for Power Games” series where he takes on the persona of Stanley Tucci’s Caesar Flickerman and bids farewell to a presidential candidate exiting the race.

That series has given equal time –and mockery—to both Democrats and Republicans.  Lincoln Chafee and Jim Webb each got their due.  Colbert has also done great segments mocking the Democrats in general.  In fact, there is ample evidence that he has effectively moved his satire into a more centrist mode.

So why don’t Republicans like him?  According to Callum Borchers in the Washington Post, the problem is that Colbert takes positions that will enrage the GOP on topics like gay marriage and Syrian refugees.  When he goes after these issues he tends to skewer the GOP, exposing the flaws to their logic, mocking their twisted so-called values, and revealing their penchant for re-writing history.  Borcher tells us “Colbert knows how to bring down the house by painting conservatives as a bunch of backward xenophobes. He’s one of the best at it.”

Borchers is right, of course. But there’s more to the story.  The real divide here is over the sort of comedy offered by Colbert on “The Late Show” and that offered by his counterparts on NBC and ABC.  Even if he goes after positions held by the right and the left, he will still offer viewers a smart, incisive comedic view—one that is radically different from the goofy, frat boy humor of Kimmel and the charming, cool guy humor of Fallon.

The key difference is that Colbert still offers satirical comedy—not just entertaining comedy.  Satire is completely different from the sort of jokes that make others seem silly or stupid.  Instead it uses irony, sarcasm, and parody to encourage critical thinking.  Colbert’s “Hungry for Power Games” segments are perfect examples of it. Whether he is going after a Democrat or a Republican, at the core of the sketch is a critique of our electoral system and the ways it favors a political oligarchy. By parodying “The Hunger Games” Colbert is able to draw interesting parallels between the fictional world and ours.

It is smart humor and it is a sort of humor one never sees on Fallon or Kimmel.  Even more importantly it is the sort of humor that is much less likely to appeal to Republican viewers because it depends on questioning beliefs and criticizing the status quo.

Recent studies have suggested that there is a significant intelligence gap between Democrats and Republicans.  This is not just tied to data that shows that “blue states” have higher graduation rates; it is connected to what researchers call “the Republican brain.” There have been studies, for instance, that link racism, low I.Q. and Republican views.  As Psychology Today reports “for those who lack a cognitive ability to grasp complexities of our world, strict-right wing ideologies may be more appealing.”

Lumping all Republicans together is not a fair move, of course, and it must be pointed out that there is competing research that gives Conservatives the edge over Liberals.  That research showed that “A socially conservative Republican (pro-life, anti-gay marriage, pro-gun rights) scored lower on the test than the classically liberal Republican (pro-small government, maximum personal freedom, and maximum personal responsibility).”  That second segment of liberal Republicans is often from a more affluent class with better access to education—a factor the researchers suggest may account for their higher intelligence scores.

It is the socially conservative, less educated, Tea Party version of the GOP that is least likely to want to watch smart comedy like Colbert’s.  This is the portion of the population that thinks climate science is a liberal plot, Obama is not a citizen, and the separation of church and state is a myth.  As Chris Mooney explains, “liberals tend to be more open, flexible, curious and nuanced—and conservatives tend to be more closed, fixed and certain in their views.”  It’s not surprising that those differences would also yield different tastes in comedy.

This means that it is not just a question of who Colbert targets in his joke; it is also a question of how he makes the joke itself.  Nuance, irony, and layered thinking may be more of the problem than Trump jokes.  He has virtually abandoned jokes about Fox News but clearly that isn’t enough to attract GOP viewers.

Recall that on “The Colbert Report” Colbert’s character went after Fox News almost every show.  With classic lines like --"A new poll says that Fox News is both the most trusted and least trusted news network. See, they do report both sides of the story" –-Colbert used smart humor to attempt to counter the power of Fox News.  As he prepared to step down as host of “The Colbert Report” he did one last segment of “Formidable Opponent—a bit that had him debating himself playing the left and the right.  As the right-wing, red-tied Colbert quoted Bill O’Reilly one last time, blue-tied, lefty Colbert said  “Oh, I am going to miss that good man.” When his counterpart pointed out that it was Colbert stepping down, not O’Reilly, the real Colbert replied, “Yeah, but no one’s going to pay me to watch him anymore, so fuck that noise!”

Colbert may have gotten rid of his character, stopped watching Fox News, and unleashed his mainstream entertaining side, but he still does smart, satirical comedy every show--unlike Fallon and Kimmel who basically trade on mindless, goofy comedy.  When polled, 43 percent of viewers surveyed called Colbert “opinionated” and 46 percent called Fallon a “cool dude.”  Could it be that any humor that asks viewers to think critically feels “opinionated”?

Colbert famously quipped on “The Colbert Report” that “the facts have a liberal bias.” But it now seems clear that his smart comedy has a liberal bias too.