"Dialogue" isn't enough to address the Israel-Palestine issue: A prominent academic organization endorses a boycott of Israeli institutions and support of BDS 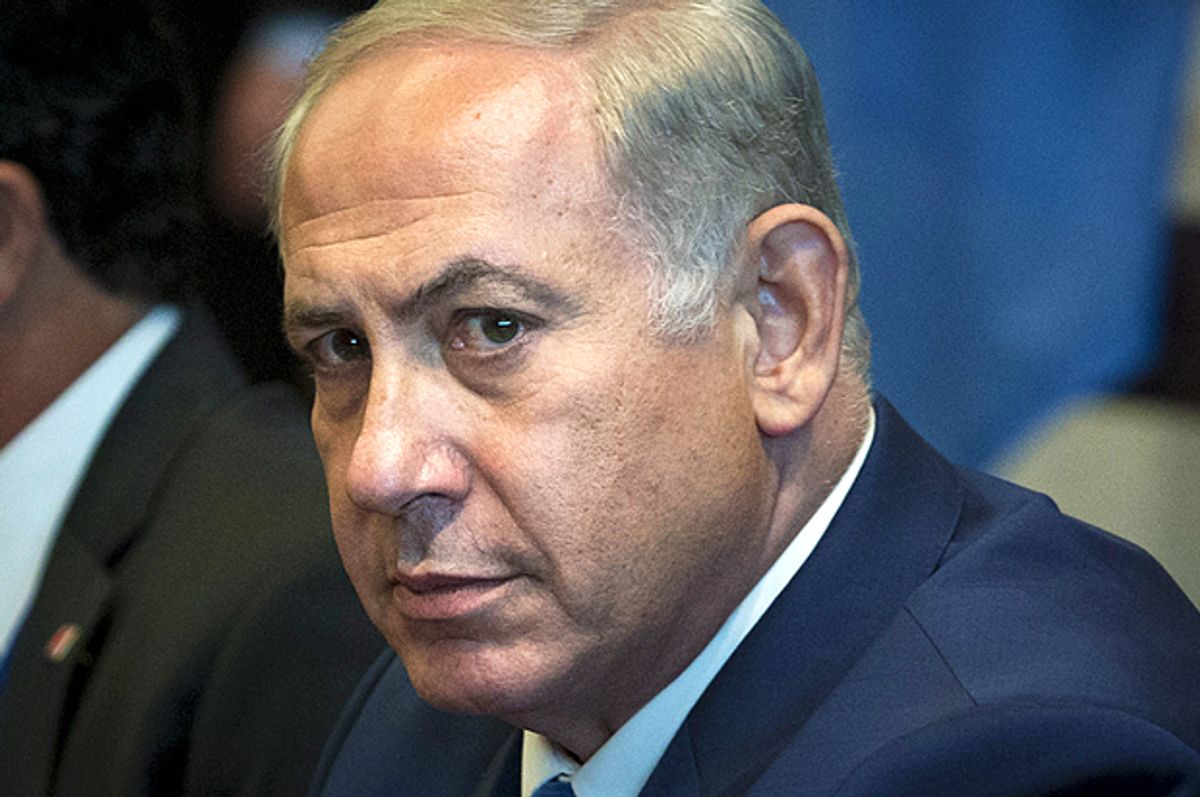 This past Friday, the American Anthropological Association, with more than 10,000 members, became the largest U.S. academic organization to endorse a boycott of Israeli institutions and to affirm the Boycott, Divestment and Sanctions movement at an annual meeting.  The resolution will be voted on by the full membership this spring.  The results of the vote on Friday -- 1,040 for, 136 against -- certainly lend pro-boycotters hope.  Notably, another resolution, critical of Israel but condemning a boycott on the grounds that it amounted to a “refusal to engage in a productive dialogue,” failed spectacularly, with just 196 in favor as compared to 1,173 against.

These two resolutions clearly stake out the two major options for academics and non-academics alike who are concerned about the Israeli occupation and the policies of the State of Israel with regard to the Palestinians. One position argues for continued “dialogue” and “exchange,” for example, the letter  J.K. Rowling and many others recently signed. The other, represented in BDS, argues for a withdrawal of engagement with Israeli state, cultural and economic institutions, and bases any dialogue on the minimal ethical grounds of recognition of basic rights under international law and joint work toward ending the system of injustice. This position asserts that over half a century of dialogue and exchange — which has programmatically and unethically avoided the issues of justice and human rights — has not made any appreciable difference.

The key thing to stress is that BDS is not against dialogue based on an ethical commitment to rights; it is, however, against the false and unethical kind of dialogue that ignores or downplays legitimate claims for rights and in so doing simply creates alibis for the perpetuation of inequality. This distinction holds true whether we are talking about discussions between heads of states, or between artists, writers, scholars and students.

Since the AAA vote has dramatically articulated these two opposing positions with regard to the capacity of “dialogue” to address the issue of Israel-Palestine, it is critical to be aware of what BDS actually is and what it offers. For it is the single most powerful and effective nonviolent force working for one of the most important human rights causes in the world.

At its base BDS is in fact a human rights movement:

On July 9 2005, a year after the International Court of Justice’s historic advisory opinion on the illegality of Israel’s Wall in the Occupied Palestinian Territories (OPT), a clear majority of Palestinian civil society called upon their counterparts and people of conscience all over the world to launch broad boycotts, implement divestment initiatives, and to demand sanctions against Israel, until Palestinian rights are recognised in full compliance with international law.

The campaign for boycotts, divestment and sanctions (BDS) is shaped by a rights-based approach and highlights the three broad sections of the Palestinian people: the refugees, those under military occupation in the West Bank and Gaza Strip, and Palestinians in Israel. The call urges various forms of boycott against Israel until it meets its obligations under international law by:

The BDS call was endorsed by more than 170 Palestinian political parties, organizations, trade unions and movements. The signatories represent the refugees, Palestinians in the OPT, and Palestinian citizens of Israel.

This rights-based approach accounts in large part for its success; people recognize what human rights are and know why they are important. This is also why antagonists of BDS seek to deny its basis in human rights, as when Stuart Eizenstat, former U.S. ambassador to the European Union, wrote to dissuade U.S. minorities from allying themselves with the Palestinians, “It’s not a civil rights issue.”  But BDS emphatically is based on rights, following not only in the tradition of Gandhi’s boycotts in India, the bus boycotts during the U.S. civil rights era, the anti-apartheid boycotts in South Africa, and the United Farm Worker boycott in the U.S., but also in the long and rich tradition of boycotts in Palestine dating back to the 1930s.

One major accusation leveled against BDS is that it aims for the “destruction” of Israel. What people who make this claim actually fear is that BDS, in seeking full human rights for all, both in the Occupied Palestinian Territories and within Israel itself, and also for Palestinians who were driven from their homes and their lands illegally in 1948, is that true democracy will mean the end of a Jewish supremacist state that excludes Palestinians from their internationally recognized rights. But you can’t have it both ways: You cannot argue that Israel should be preserved because, among other things, it is “the only democracy in the Middle East,” and at the same time argue for preserving a state that has declared itself a Jewish state, with lesser or no rights for non-Jews, and the world’s only continuous settler colonial project.

Two objections to BDS come from critics of Israel. First, some are troubled by BDS’s rights-based approach. They have no faith in human rights; they point to the difficulty in enforcing international human rights. Other critics say that BDS evades real concrete work in national liberation struggles. These are important points to address.

First, it’s true: It is difficult to prosecute human rights cases. But people who seriously work in human rights know that better than anyone. They regard international human rights as having many facets and modes of operation. Human rights law works directly, but also indirectly, and in conjunction with regional, national, local bodies and courts, lending material and moral support to local movements, offering some degree of protection, and shining light on abuses and injustice.

This certainly has been the case with BDS, which has done more to shed light on the grievances of the Palestinians and to mobilize effective action to address these injustices than any other movement. Its popularity is based on the fact that more and more people see in the case of the Palestinians resonances with injustices closer to home. BDS presents a uniquely effective, universally understandable platform of rights under international law to reach the most profound rights of the Palestinian people.

Second, as one of the most respected activists for Palestinian rights, Leila Khalid, says, BDS “doesn’t liberate land.” But critics of BDS who are fond of quoting that phrase are disingenuously avoiding the full context of her statement, which details the actual aims of BDS, setting the critical preconditions for national liberation and self-determination. In fact, Khalid clearly explains that BDS performs an essential critical function on the international stage. At the same time, it is up to the people in Palestine to do what they can with that support. This is entirely in line with the aims of BDS, which does not assume to dictate what should be done once full rights are restored. Khalid writes:

BDS, of course, on the international level it is very effective. But it doesn’t liberate, it doesn’t liberate land. If there’s BDS all over the world, and the people are not resisting, there will be no change. BDS helps us to continue the struggle and to isolate Israel, and then the balance of forces changes here. It’s very important for us in the international level to have more people having campaigns, because it means the narration of our story is now on that level, people will ask ‘why are they going for the BDS?’ Now, there’s an experience, and it’s not something theoretical we are speaking about – the BDS during the apartheid era in South Africa, it helped the people who were holding arms. But if they were not holding arms it may have affected them politically, but it would not have liberated, not on the ground.

BDS is a near-consensus movement among Palestinians precisely because it addresses the basic right of all components of the people of Palestine. But it never claimed to be the political leadership of the Palestinians or the only form of resistance to achieve Palestinian rights. The BDS Call of 2005, endorsed by the broadest cross-section to ever exist among Palestinians, in historic Palestine and in exile, sets the three necessary conditions without which the Palestinian people cannot exercise their right to self-determination. It never claims to be the path toward liberation, but a crucial part of it.

As Amira Hass writes in Haaretz, a boycott of Israel is “the rational response to Israel’s state terror”:

[T]here are citizens in other countries who take notice of the routine acts of violence committed by Israel and the thousands of soldiers on its behalf, and they are horrified. They cannot take individual action against each one of these acts, so they lump them all together. When summed up, it’s state terror, which naturally leads to focused calls for boycott. That is a more effective and rational action and its reverberations continue longer. There is thought involved, eloquence (in many languages), social media literacy, protests, a lot of youthful energy, feelings of disgust and rage, devotion and much less money and human resources than the individual acts of resistance.

But more than being a rational act, withdrawing support for a racist, unjust system is a profound moral obligation. In his “Letter From a Birmingham Jail” Martin Luther King Jr. makes exactly this point:

When asked to comment on Friday's event, AAA organizers Jessica Winegar and Lisa Rofel noted the particular significance Israel-Palestine has for their field: "Anthropologists recognize the situation in Palestine for what it is: a settler-colonial regime, one unconditionally backed by Washington. Anthropologists are particularly well-placed to help Americans understand the colonial nature of Israel's practices. We look forward to ratifying the results of this historic victory in the spring vote." Another organizer, Nadia Abu El-Haj, pointed out the way this vote shows a sense of solidarity among other organizations, “Over 1,000 anthropologists affirmed an ethical and political obligation to join the growing number of American academic associations supporting the BDS call.”

Indeed, this momentous event adds enormously to the momentum of the boycott movement; within 24 hours the announcement of the AAA vote was viewed by more than 30,000 people and “liked” hundreds of times on Facebook. In January the Modern Language Association, with more than 25,000 members, will continue its own deliberations on a resolution for an academic boycott of Israel.