Of course, The Donald still leads the pack but he's warned that he'll "go to war" if Cruz keeps rising 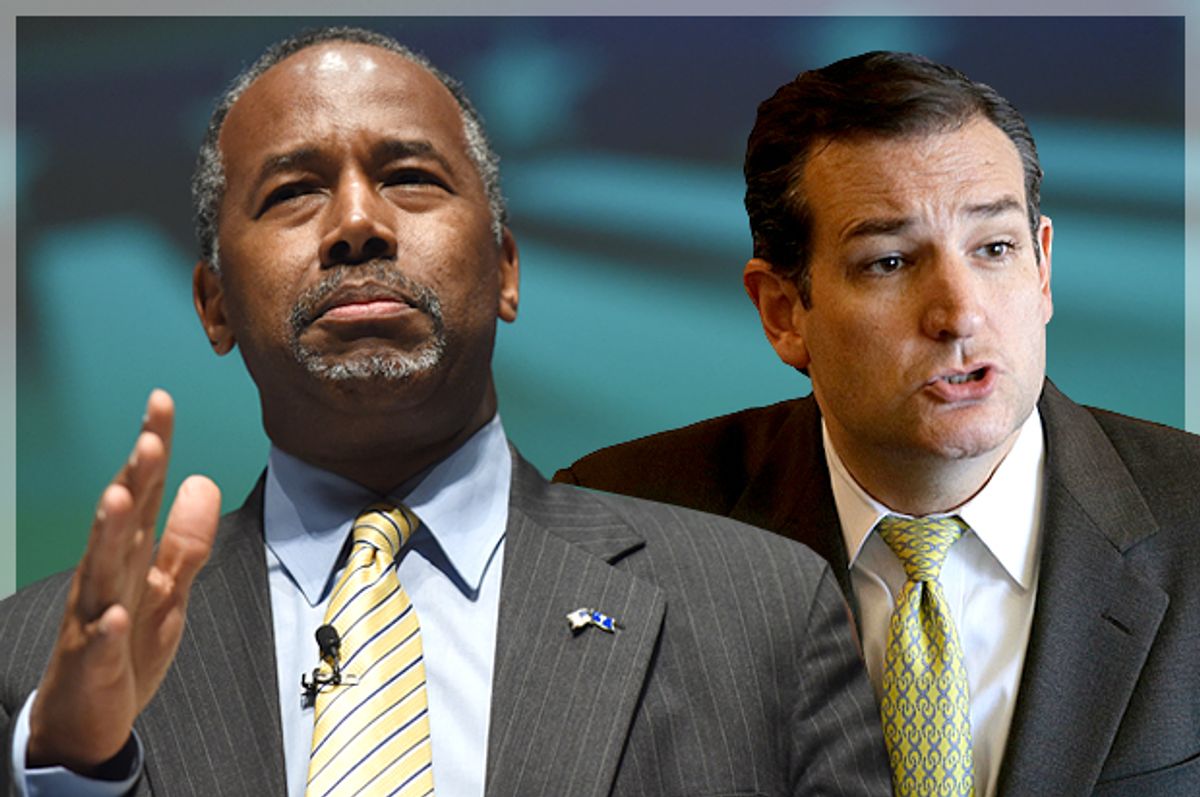 Ted Cruz's master plan may be beginning to pay off.

This weekend, MSNBC ran a piece explaining how "Ted Cruz could win the GOP nomination." An NBC News poll out last week found the Tea Party senator surging to a second-place tie with a beleaguered Ben Carson nationally, and now, a more indicative Quinnipiac poll of Iowa GOP voters finds Cruz doubling his support from only one month ago to surge to second place in front of Carson, who plummeted ten points.

Trump is at 25 percent in the Quinnipiac University poll released Tuesday, followed by Cruz at 23 percent and Carson at 18 percent. Marco Rubio, at 13 percent, is the only other Republican in double digits.

As Salon's Sean Illing points out today, Cruz is hardly a moderate by any stretch of the imagination, but he is now attempting to simultaneously realign his brand in the wake of the Paris attacks by using softer rhetoric to sell his extreme policy prescriptions as more palatable to a general election electorate, and appeal to some of the most right-wing, evangelical voters in the nation. As the AP puts it, Cruz wants to cast himself, in contrast to Trump and Carson, as the "executable outsider," after working for months to forge a friendly alliance in an effort to eventually capture Trump's base of support.

“Last month, we said it was Dr. Ben Carson’s turn in the spotlight. Today, the spotlight turns to Sen. Ted Cruz of Texas. The Iowa Republican Caucus has become a two-tiered contest,” said Peter A. Brown, the assistant director of the Quinnipiac University Poll.

The freshman Texas senator elected in 2012 enjoys the commanding support of 42 percent of Tea Party voters in Iowa and his favorability in the state stands at a healthy 70 percent, in spite of his much reviled reputation in Washington, D.C. He and his father, Rafael, have criss-crossed the Hawkeye state in a targeted effort to win Iowa's crucial evangelical vote. In fact, Cruz is the only candidate in the field to have organizers in every county in Iowa, according to Bloomberg.

Cruz's rise in Iowa has come at Carson's expense. But despite enduring an onslaught of scrutiny after parts of his foundational narrative could not be substantiated and he appeared utterly unprepared to handle questions on national security as ISIL ramped up its international attacks, a once rising Carson still managed to maintain his high favorable ratings, 79 to 15 percent, although he did drop ten points overall in the poll.

Of course, Donald Trump continues to embody the moniker, Teflon Don, as the former reality TV star saw his support in the Quinnipiac poll rise to a quarter of all GOP primary voters in Iowa, up from 20 percent last month, to regain his top spot. The poll, conducted entirely post-Paris attacks, also shows no negative impact of Trump's recent trip to Iowa where he asked the crowd, “How stupid are the people of Iowa?”

On the campaign trail, Trump has vowed to go after his new buddy if he continues to see his popularity surge to present a true threat. “Senator Cruz has been so nice to me, I can’t hit him,” Trump said in South Carolina earlier this year. “I may have to if he starts getting like really close.”

“If he catches on, I guess we’ll have to go to war,” he said of Cruz on CNBC last week.

And while Kentucky Senator Rand Paul rounds out the top five in Iowa, no other candidate topped 5 percent -- not even Jeb!

“The other candidates will need miraculous comebacks to crack the top tier with slightly more than two months before the voting begins," according to Brown.