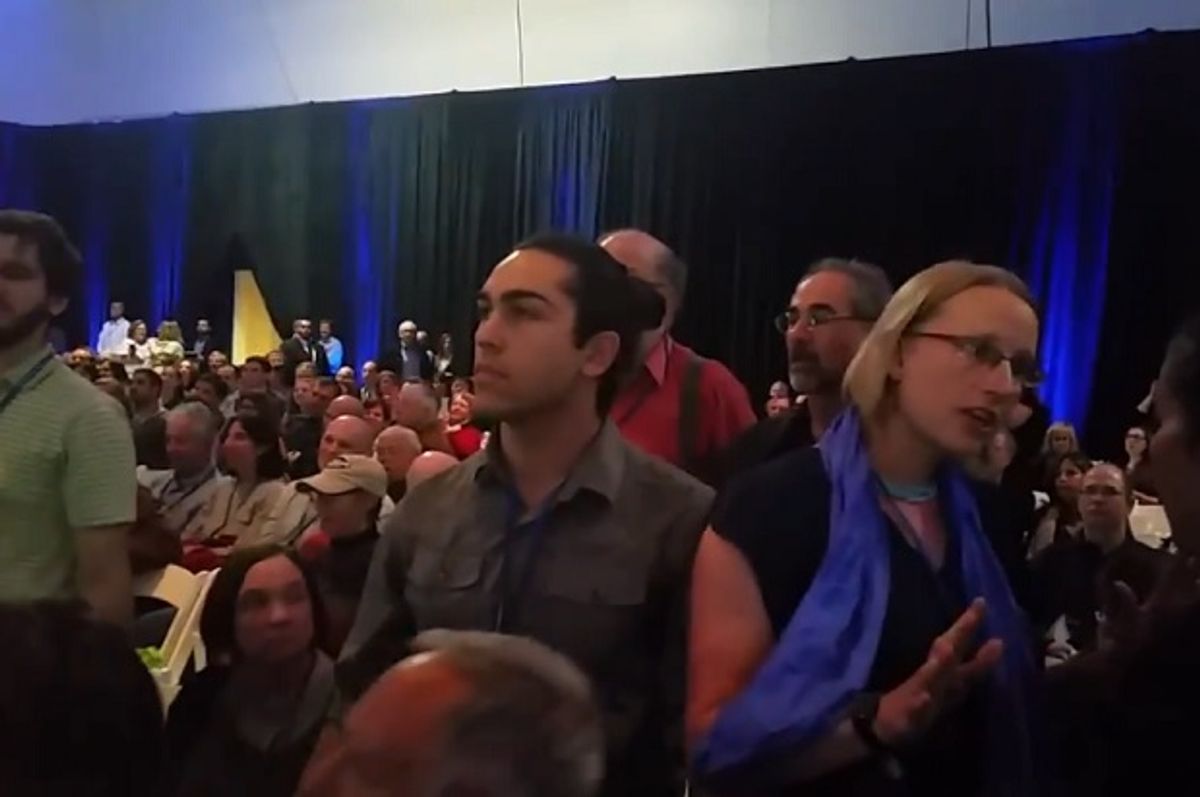 Jewish American protesters were assaulted when they staged a protest and mock citizen's arrest of a prominent Israeli politician at the Zionism 3.0 conference in Palo Alto, California on November 22.

When Hotovely began to speak, the activists stood up in the audience and shouted "Tzipi Hotovely, this is a citizen's arrest. We charge you with inciting colonial violence. We charge you with the crime of apartheid. You incite Israeli settlers and soldiers to attack Palestinian children. Your army has shot 2,500 Palestinians since October 1. Colonialism and dispossession are not Jewish values."

After the protesters started shouting, audience members began to assault them. Three other activists joined the protesters inside, filming them with multiple cameras. They captured some, but not all, of the assaults on camera.

While the protesters were chanting "Palestine will be free," they were aggressively pulled by their arms and pushed down the aisle one by one.

Activists captured video of a conference attendee pushing a protester down the stairs. When the activist then approached her and said "I am pressing charges," she kicked in his direction.

Another conference attendee hit a Jewish activist who was filming the protest, and accused him "justifying the Holocaust" by peacefully speaking out against the Israeli government's human rights abuses and violations of international law.

"I want everyone to do more for justice for Palestinians," said Jim Haber, one of the Jewish Voice for Peace (JVP) members at the protest. "Tzipi has been saying such horrific things, things that are illegal until international law, repugnant, and immoral. I have to resist that."

Eli Isaacs, another protester, explained, "As a Jewish Palo Alto native, I am appalled that this conference promoting Zionism, a racist ideology, is taking place in my hometown. I am outraged that a well-known racist firebrand and representative of a criminal government was invited to address this gathering. I had to act."

The citizen's arrest warrant the activists wrote notes that Hotovely told her ministry that the entire land of historic Palestine belongs to Jews, and that the indigenous Palestinians have no right to any of it. "This country is ours, all of it. We didn't come here to apologize for that," she maintained.

Hotovely is a strong supporter of the expansion of ethnically exclusive Israeli settlements in the occupied Palestinian territories, which are flagrantly illegal under international law and violate the Fourth Geneva Convention. She has even openly called for illegally annexing occupied Palestinian land.

The Israeli deputy foreign minister, the activists indicate in their warrant, also wants the Israeli government to illegally take control of the Temple Mount in occupied East Jerusalem. The Temple Mount is at the site of al-Aqsa Mosque, which is the third holiest location in Islam.

The full text of the citizen's arrest warrant is embedded below.

In her speech, Hotovely, who is known for her hard-line right-wing politics and is a prominent member of Israel's ruling Likud party, insisted that the illegal Israeli settlements -- which are continuously expanding and gobbling up more and more Palestinian land under Prime Minister Benjamin Netanyahu, despite his insistence to the contrary -- are not and never were an obstacle to peace.

The Zionism 3.0 conference is co-hosted by Israel's leading liberal newspaper Haaretz. The conference also featured Israeli-American journalist Jeffrey Goldberg, who is known for his staunch defense of Israel.

An organizer of the protest told Salon that one of the JVP activists who planned on participating was contacted before the Zionism 3.0 conference and told he had been disinvited. The conference told him it would only allow him in if he signed a form promising not to disrupt the event.

The organizer also told Salon that each activist paid as much as $80 to register for the conference, even while knowing that they would be removed for the protest. He said the price was worth it, however, stressing that, in the past few months, the violence and repression in Israel-Palestine have escalated, and that he and the fellow activists felt compelled to do something about it.

Israeli forces killed 94 Palestinians, including at least 18 children, from October 1 to November 24. An Eritrean refugee was also lynched by an Israeli mob in mid October. 16 Israelis were killed in the same period.

At least 9,171 more Palestinians have been injured since the beginning of October, according to the U.N. Human rights organizations have accused the Israeli government of using excessive force against Palestinian protesters, sometimes even deliberately killing them.

The U.S. government has steadfastly supported Israel, in spite of its increasingly violent repression of Palestinians.

Tzipi Hotovely, Deputy Foreign Minister of Israel, you are hereby commanded to be brought for trial before a jury of the people.

Tzipi Hotovely is charged with the following crimes:

Colonialism. Colonialism is a serious crime under international law. Tzipi Hotovely is one of the leading promoters of the settler movement in Israeli politics. Coordinator of the Likud campaign in the settlements, Hotovely has declared on multiple occasions that "this land is ours. All of it is ours." In violation of Article 46 of the Hague Convention and Article 49 of the Fourth Geneva Convention, Hotovely is directly involved in the Israeli government's promotion and building of settlements in the West Bank.

Inciting colonial violence. "It’s time to change the rules of the game and annex all the Jewish communities," Hotovely has said, referring to West Bank settlements. "All of the land belonged to the creator of world and when he wanted to, he took from them and gave to us." And: "My position is that between the sea and the Jordan River, there needs to be one state only—the state of Israel, which has an Arab minority. There is no place for an agreement of any kind that discusses the concession of Israeli sovereignty over lands conquered." These incendiary statements have provoked increasing levels of violence by Israeli soldiers, police, and settlers. Since October 1, 91 Palestinians, including 18 children, have been killed by Israeli fire. 1,458 have been shot by live Israeli ammunition, and another 1,070 shot with rubber-coated steel bullets; 300 have suffered fractures and bruises from assaults by soldiers and settlers; 6,400 have suffered the effects of tear gas inhalation in the West Bank and Gaza Strip. Hovotely has fully participated in the activities and decisions of the government she represents, urging that "The government of Israel must... return to the policy of assassination" of Palestinians.

Hovotely urges the annexation and domination of Palestinian holy places. She called for the flying of the Israeli flag over Haram al-Sharif ("It is my dream to see the Israeli flag at the Temple Mount"), labeling the holy site the "center of Israeli sovereignty."

Apartheid. Apartheid, the institutionalized and systematic oppression and domination by one racial group over another, is a crime against humanity. It includes measures calculated to prevent a racial group from participating in the political, social, economic, and cultural life of the country. Hotovely's government enacts these measures through restrictions on Palestinian movement, checkpoints, roadblocks, and segregated roads that apply only to Palestinians. The Israeli segregation wall divides Palestinians from their land, while networks of settlements further segregate Palestinians from each other. Meanwhile, Israeli settlers in the West Bank enjoy the full privileges of Israeli citizenship regardless of location; the status accorded them as Israeli Jews ensures them free movement, access to water, education, and full rights, and freedom from military law. The school systems are almost completely segregated with vast disparities in resources between Israeli and Palestinian schools.

Palestinians are subject to administrative detention without charge or trial on a routine basis by Hotovely's government. They face military courts that convict 99.74% of Palestinians who come before them. Israelis, on the other hand, face civil courts that provide a range of protections and rights not available to Palestinians. Membership in Palestinian political parties, posting on Facebook and other social media sites, gathering in large groups, calling for the freedom of Palestinian political prisoners, attending demonstrations and giving media interviews are all punishable by administrative detention or imprisonment via the military courts.

Hotovely has worked to expand and deepen the apartheid system,including working with groups— including those labeled terror organizations,such as Lehava—to prevent marriages between Jews and Palestinians.

In recognition of the severity of these offenses, we are hereby conducting a symbolic citizen's arrest.

Executed this 22nd day of November, 2015, in Oakland in the State of California.