Oh, the suffering of the CIA: In Showtime's "The Spymasters," America's chief spooks bare their souls on the pain of the terror war

Whom to waterboard? Which village to drone? A bizarre documentary explores the spy elite's secret suffering 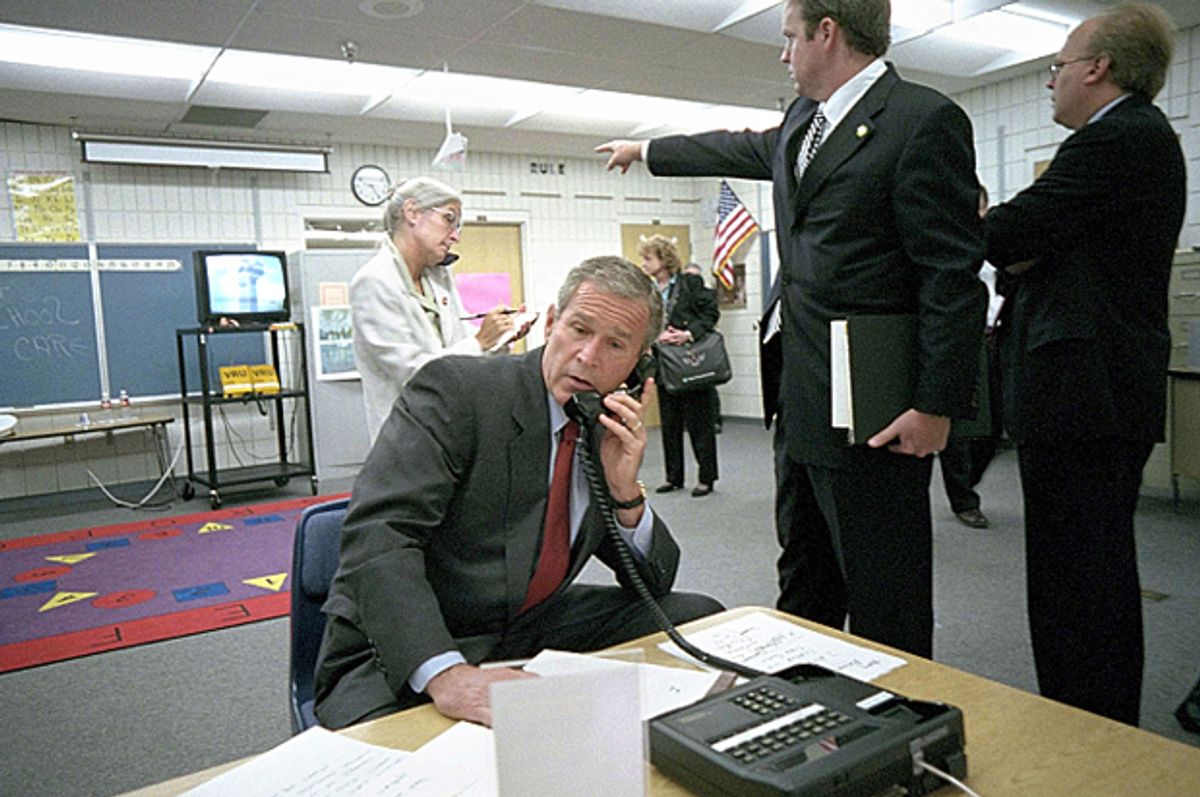 José Rodriguez is a Harley-riding hardass who spent many years as a clandestine counter-terrorism operative in the Central Intelligence Agency, and he’s sick to death of hearing people whine about waterboarding. Some people may have understood Kathryn Bigelow's “Zero Dark Thirty” as a pro-CIA movie, but Rodriguez assures us its depiction of waterboarding as brutal and nightmarish was “total bullshit.” Yeah, that venerable technique of “enhanced interrogation” has been used as torture at other times in history, Rodriguez admits, including by the Nazis, the Soviets and the witch-hunters of the Spanish Inquisition. But not by the CIA. Our guys always had doctors on hand to make sure nobody died, he says. They used small amounts of water, not gallons at a time, to provoke the desired sensation that a detainee was drowning. They generally stopped the procedure after 10 seconds or so (that point is a little vague). “We waterboarded three guys,” Rodriguez scoffs. “Give. Me. A. Break.”

Simultaneously charismatic and chilling, Rodriguez is one of the stars of “The Spymasters: CIA in the Crosshairs,” an addictive if perplexing documentary that premieres this weekend on Showtime. He bears little resemblance to the dozen CIA directors interviewed in the film, all the way back to Adm. Stansfield Turner (1977-81) and up to John Brennan, the current incumbent. Those guys don’t all agree about everything, and a few of them clearly feel the agency has gone badly off the rails in the era of “extraordinary rendition” and drone warfare. But as human specimens they’re all pretty much of a piece, the way archbishops or bank presidents are. In fact they reminded me of Jesuit priests, a soft-spoken, pasty-faced brotherhood of white dudes with elite educations and deep roots in the arcane national security apparatus. It’s fascinating to hear them spin their self-justifying anecdotes, offer their guarded and evasive mea culpas and mouth their pseudo-sophisticated clichés, but my general feeling is that we know even less after they’re done talking than we did before.

How much do we really understand about the CIA, even after all the attention paid by novelists and screenwriters and journalists to its myths and legends? And how much do we trust the CIA to tell its own story? The answers to those questions may seem simple enough: Not much, or maybe some Rumsfeldian formula like, “We cannot know what we do not know.” But the nature of the questions is not simple at all, and our ambiguous relationship to the much-loathed and much-mythologized government agency whose budget is a state secret, which has spent our tax dollars on the Bay of Pigs invasion, the overthrow of Salvador Allende, “extraordinary rendition,” “enhanced interrogation” and now the secret drone war is a central conundrum of American identity and American life.

“The Spymasters” offers an extraordinary opportunity to explore that conundrum, by hearing numerous CIA veterans talk about their work, about the philosophy that guided them, and about the current state of the world’s most infamous spy agency. Along with all 12 living CIA directors and the Mephistophelean Rodriguez, we meet the former terrorism analyst Gina Bennett, an expert on al-Qaida who was the obvious model for Jessica Chastain’s “Zero Dark Thirty” character. By her own account, Bennett destroyed her marriage through her monomaniacal CIA career, and she says that Islamic terrorism is nowhere near as big a threat to America as the measures we adopt in trying to prevent it. There are numerous startling moments of illumination in “The Spymasters,” but the movie’s aims, goals and methods are never entirely clear, which certainly befits its subject. Is this muckraking journalism, or something closer to a propaganda exercise or a feature-length infomercial? Is the apparent candor of all these people who spent years in an agency built on lies, disinformation and “plausible deniability” anything more than the performance of candor for political purposes?

I’m not suggesting that directors Jules and Gédéon Naudet – they’re the French filmmaking brothers who shot that accidental video of the first plane striking the World Trade Center on 9/11 – set out to make a CIA whitewash. I’m saying there’s a reason why all these people agreed to talk to them, and a reason why they were allowed to shoot inside the legendary CIA headquarters in Langley, Virginia. Someone came to the conclusion that this movie (a co-production of Showtime and CBS News) was the right venue for a P.R. counteroffensive, and for opening the curtain on many of the disagreements within the American intelligence community: on drones, on torture, on the bad information and bad analysis that led to the Iraq war; on the summary execution of Anwar al-Awlaki, the "terror sheik" who was a U.S. citizen; on whether the agency’s new role as a paramilitary covert army is a violation of its core mission.

Those issues are contentious and undeniably important, but beneath and behind them, “The Spymasters” has a running theme that varies surprisingly little from one interviewee to the next. Essentially, the point seems to be to convince us that we don’t understand how hard this stuff really is, or how decent these people really are. They think really, really hard about who should disappear into black-site torture cells, and which Somali villages should be obliterated by robot bombs from above, and they wouldn’t do any of it if it weren’t urgently necessary to protect the homeland from attack. (Every time any government official says the word “homeland,” everything out of his or her mouth for 10 minutes in all directions is rendered meaningless.)

There’s a bizarre framing device in which Leon Panetta, Obama’s CIA chief from 2009 to 2011, discusses the deliberations that led to his decision to assassinate a senior al-Qaida figure in a drone attack that also took out the guy’s entire family as collateral damage. We see Panetta looking grave and stricken, staring at the floor, going to church and praying, rosary in hand. I don’t claim to know for certain whether that particular act of mass murder was the correct moral choice, and I think it's important for left critics of the CIA to acknowledge how much we don't know. (Whatever they told Obama between Election Day in November 2008 and Inauguration Day in January 2009, it was some scary shit.) But I do know that turning Panetta into the hero of a Lifetime melodrama about the moral agony behind that decision is profoundly offensive.

I can only assume that this movie was inspired by the extraordinary Israeli documentary “The Gatekeepers,” in which several former heads of the Shin Bet, Israel’s internal security agency, discuss their greatest successes and failures and their controversial role as the bulwark of Israeli rule in the Occupied Territories. The pronounced differences between those films may reflect the differences between the global positions of the two nations, or even the theological distinction between rigorous rabbinical scrutiny and millenarian Christian sermonizing. But I never once had the feeling in “The Gatekeepers” that anyone was feeding me a line or trying to convince me what a good person they were. Whereas every single one of the former CIA directors in “The Spymasters” begins and ends with apologetics: Mistakes were made and bad stuff happened, but we are a great nation and I'm a good guy. It might simply be the difference between a nation founded on the premise that everything will always get better, and a nation founded by an itinerant people who have no reason to believe that.

In this context of intense Jesuit spin-craft, there’s something refreshing about Rodriguez’s lack of pretense – perhaps something evil and inexcusable, but also refreshing. He’s the guy who designed and ran the infamous waterboarding program, and he’s not backing down from it by a quarter-inch. He doesn’t think there was anything so bad about it, and he hasn’t lost any sleep at night. Yeah, he destroyed video recordings of CIA agents waterboarding naked detainees, and he understands what conclusions people are likely to draw about that. He also doesn’t care: “I was protecting the people who worked for me.” Anyway, it wasn’t torture because – well, because he says it wasn’t. What we think we know about it from TV and the movies is complete hogwash. Dianne Feinstein and John McCain’s contention that waterboarding produced no “actionable intelligence” and did not aid the search for Osama bin Laden was flat-out wrong.

Waterboarding was just not a big deal, as Rodriguez tells the story, except when it was awesome. Accused 9/11 mastermind Khalid Sheikh Mohammed really didn’t mind it too much, Rodriguez says. These details are not mentioned in the film, but according to various news reports and the Feinstein-McCain committee, Mohammed was waterboarded 183 times, first at a CIA prison called the “Salt Pit” in Afghanistan, then at black sites in Poland and Romania, and then at Guantánamo Bay. That stuff wasn’t what finally rendered Mohammed “compliant,” Rodriguez says. It was more the sleep deprivation, when interrogators allegedly kept him awake for almost eight full days. (After that, Mohammed confessed to 31 different terrorist plots, quite a few of which seem unlikely or imaginary.)

If Rodriguez almost seems like a fictional character to begin with – the street-wise, right-wing Latino biker turned black-ops specialist, possibly invented by Dick Cheney as a comic-book alter ego – the entire universe depicted in “The Spymasters” has an aura of unreality or improbability. It doesn’t help matters that Rodriguez and the defensive, bombastic George Tenet (his boss under George W. Bush) and the pedantic and precise Michael Hayden and the tabloid-disgraced Gen. David Petraeus and Panetta and John Deutch and the rest of them are interviewed by Mandy Patinkin, whose character on “Homeland” is pretty much a Jewish version of Rodriguez.

It’s much better to have this testimony than not to have it, and every single interviewee in “The Spymasters” makes clear that covert action on its own cannot possibly solve the complex of political, social, cultural and economic problems captured by the word “terrorism.” But we are a people eager to tell stories and eager to hear them, especially when they are stories of rebirth and redemption. If the most secretive and powerful spy agency in human history has abruptly chosen to tell us a story about its new openness, its new humility and its enduring humanity – about how badly its noble mission has been misunderstood and how little it has to hide – we would do well to ask ourselves why.