"Ted Cruz's anus is where his belly button should be": Trevor Noah just trolled his Planned Parenthood garbage with TedCruzTrueFacts.com 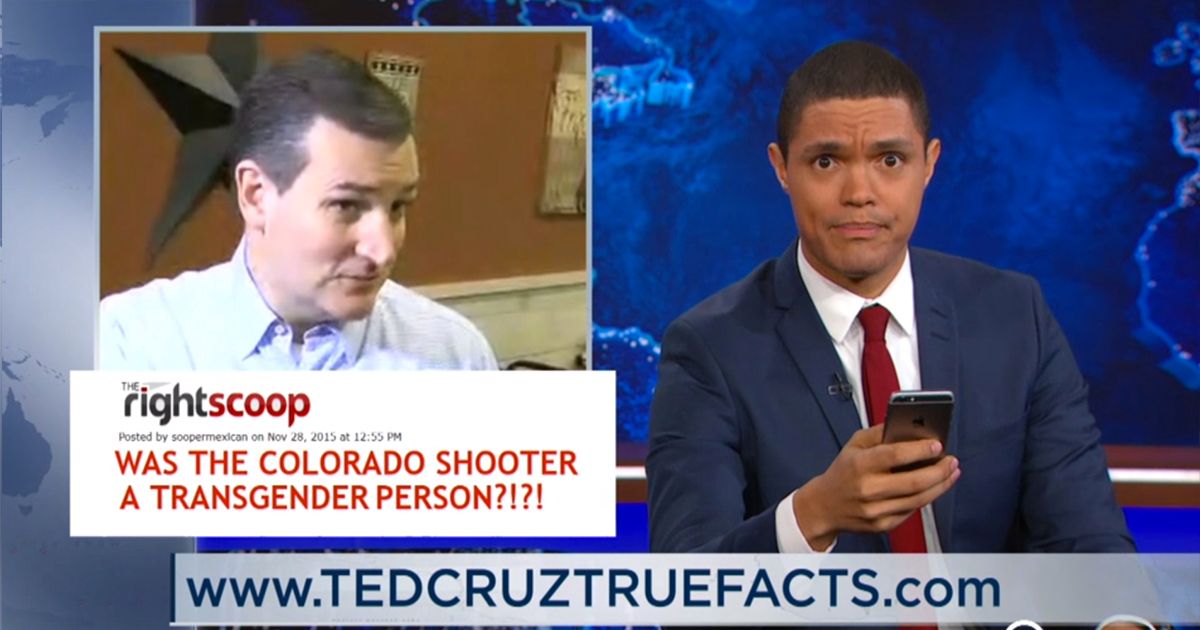 There was so much racism and Islamophobia when idiotic governors began denying sanctuary for Syrian refugees in their states. They feared the "looming" and "imminent" threat that somehow manages to follow only Muslims these days. But after last week's terrorism at Planned Parenthood, the "Daily Show" knows the very real and consistent threat isn't foreign but rather domestic.

"If I had to imagine the type of person that would shoot up an abortion clinic, it would be exactly this guy," host Trevor Noah said Monday night.

Of course, most of the people running for president have treated the incident respectfully, according to Noah. "Most of them," except for anti-Planned Parenthood crusader Ted Cruz.

Cruz said that there was really no evidence to prove that "this guy" was an anti-abortion activist, leaving out the things he said after he was arrested, and suggested that really Robert Lewis Dear was a transgender leftist activist. "I'm sorry, what?" Noah questioned with a classic WTF face.

Instead, that load of BS was nothing more than an Internet rumor. Noah then proved why we shouldn't believe everything we read on the Internet by instructing the audience to visit TedCruzeTrueFacts.com, a web site the "Daily Show" started to illustrate the point.

But Noah told us that we can't be like folks on the right and judge people simply for how they look or for their religion. In fact, because this suspect is a white Christian dude, many in the media are debating whether or not we can call it terrorism.

Thankfully, "Daily Show" white guy correspondent Jordan Klepper was on the case to help explain why white Christian men are really getting a raw deal these days. He reminded the audience what the United States was founded on, and implored them, "please do not discriminate against white Christian men."

"I get it," Klepper began, "most mass shootings in America are done by white 'Christian-looking' dudes, but the vast majority of white guys are peaceful bros who want to live quiet lives here in America. Specifically the suburbs.... but this anti-white paranoia is a slippery slope that will only lead to surveilling guys like me in our most sacred places: Luke Bryan concerts, Bikram yoga class...."

Check out more in the video below: