Cruz says he doesn't know any conservatives who wants to ban contraception—who is he kidding? 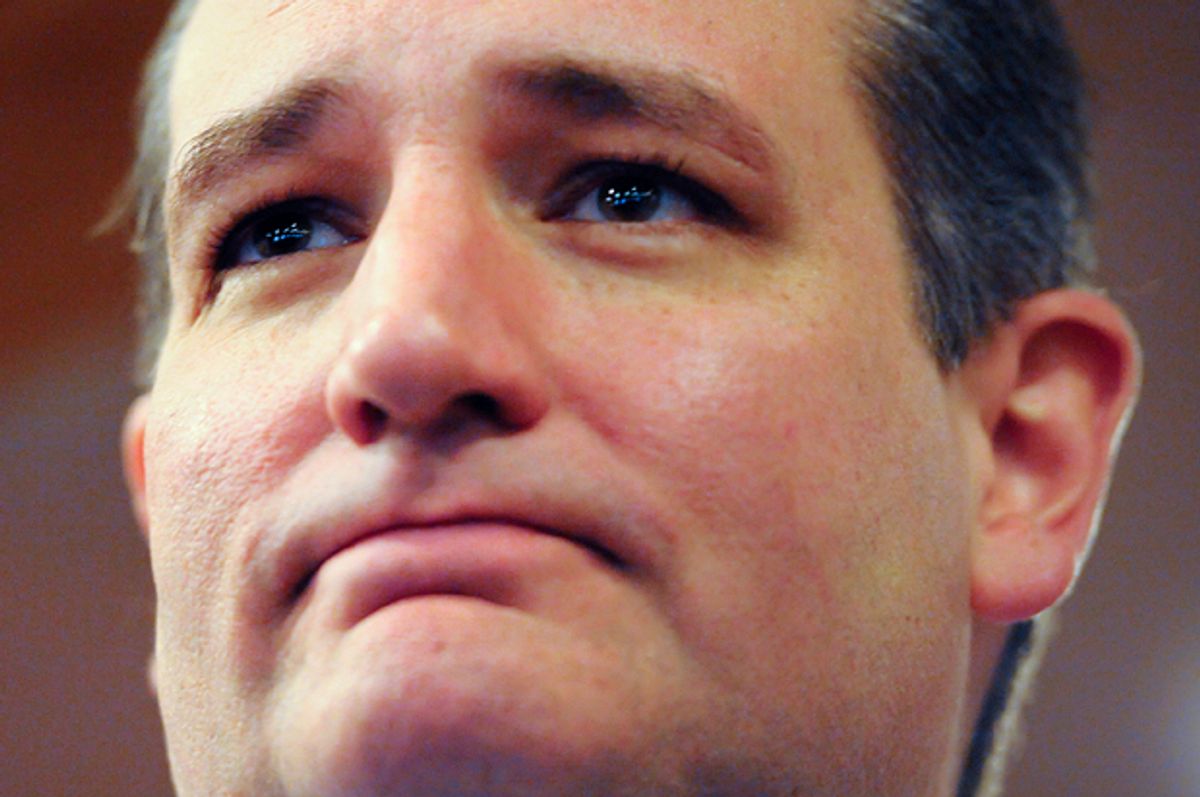 He may be arrogant, uninformed and flat out dishonest, but give him that much — Ted Cruz can turn a colorful phrase.

On Monday, the Republican hopeful spoke to Iowans at a town hall meeting, and gave a fascinating response to a question about "making contraception available to women who want to control their own bodies." "Imagine for a second you're Hillary Clinton," he told the audience. "You're trying to think, 'How do I run?' Well you can't run on the economy because we have the lowest percentage of Americans working any year since 1977. You can't run on Obamacare because millions of people have lost their jobs, lost their health care, lost their doctors, seen their premiums skyrocket. You certainly can't run on foreign policy because every country you touched as secretary of state is a disaster." He then paused dramatically, saying, "So what do you do? You go, 'Ah, ha! Condom police. I'm gonna make up a completely made up threat and try to scare a bunch of folks into thinking someone's going to steal their birth control. What nonsense."

I don't know about you, but I am so relieved that conservatives believe that attacks on women's reproductive rights are "a completely made up threat." I guess those ongoing, conservative-fueled, trumped up investigations of alleged Planned Parenthood "misuse of federal funds," those campaigns for incredibly restrictive laws around abortion, the forcing women to have invasive and humiliating ultrasounds before granting approval for them to terminate pregnancy — were all just a hallucination.

Cruz also told the Monday crowd, "I have been a conservative my entire life. I have never met anybody, any conservative who wants to ban contraceptives. As I noted, Heidi and I, we have two little girls. I'm very glad we don't have seventeen… Last I checked, we don't have a rubber shortage in America. Like look, when I was in college, we had a machine in the bathroom. You put 50 cents in -- and voila! Anyone who wants contraceptives can access them, but it's an utterly made-up nonsense issue."

I guess it was just made up earlier this year, when Republicans in Colorado refused to fund a successful, safe IUD program to reduce teen pregnancy. In an interview with the Colorado Statesman, Republican Rep. Lori Saine said at the time, "When subsidizing a commodity, you also reward the behavior surrounding the commodity. So in this scenario, the government is subsidizing sex."

And surely Republican-backed abstinence-only sex "education" — like the 2012 Texas Republican education platform that featured "the opposition of condom distribution" — was about something other than, uh, opposing birth control. Like when, earlier this year, Texas House Republicans voted to divert funding from HIV screening to abstinence only education. Surely Cruz must have heard about it from Texas State Rep. Stuart Spitzer — who calls him "my favorite senator."

Likewise, it was all just a dream when Republicans successfully pushed for businesses to have the right refuse to cover contraception in employee healthcare, on so-called religious grounds. Last March, totally chill with contraceptives Ted Cruz declared, "Time and time again, President Obama has granted exemptions to the politically powerful, yet refuses to grant the same leniency to those for whom Obamacare's contraception mandate infringes on their beliefs." In June, he called the Hobby Lobby decision "a landmark victory for religious liberty…. This ruling is a repudiation of the Obama Administration’s untenable position that people with sincerely held religious beliefs should be forced to comply with an unconstitutional mandate while a parade of waivers, exemptions, and delays are granted for purely commercial and political interests."

So it sounds maybe he has heard of conservatives opposed to birth control?

Perhaps Cruz, clearly a great fan of Trojans, believes that when we speak of birth control we are only referring to condoms. Maybe when the rest of us talk about contraception, he thinks "monstrous baby killing." After all, at a 2013 Values Voter Summit, he repeatedly referred to Plan B as abortion-inducing, saying the Obama administration was telling "the Little Sisters of the Poor that they must provide abortifacients or pay millions of dollars in government fines." As RH Reality Check explains in terms so simple even Ted Cruz might understand, "Birth control is not an abortifacient because birth control does not cause abortions."

Cruz may in his delusional heart of hearts believe that because he knows how to use a vending machine, he's pro-birth control. What he desperately doesn't understand is how birth control that isn't dispensed from the wall of a public restroom (or, to be fair, purchased off the shelf from Target) works. He doesn't know the difference between contraception and abortion. He doesn't support birth control when it's covered by insurance or taught to students. And he certainly doesn't grasp anything the Condom Police could teach him about how to safely and realistically prevent unwanted pregnancies. He has, however, once again distinguished himself as expert on a subject he does know — nonsense.