New York critics pile the love on "Carol" -- but wait, "Mad Max" is now an Oscar contender, too

Early awards throw the Oscar race into chaos as "Spotlight," "Danish Girl," DiCaprio and Tarantino all get dissed 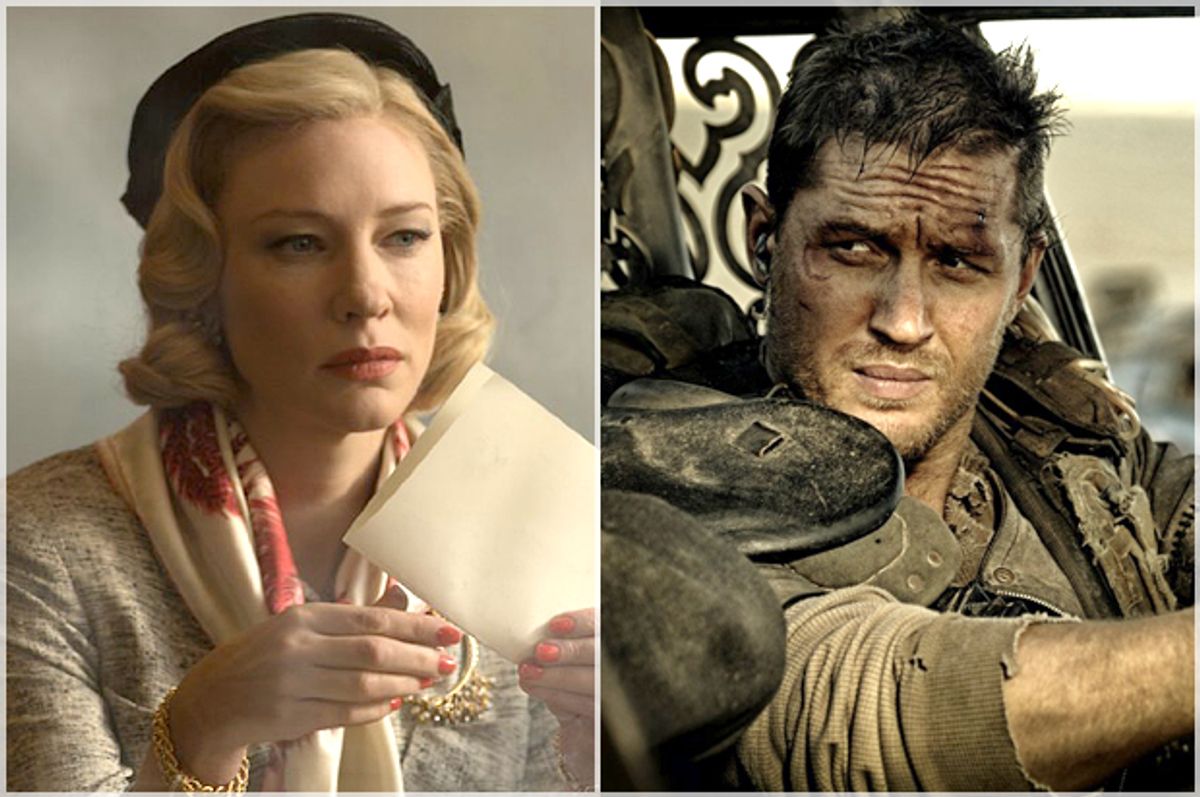 It will be weeks before even the most avid moviegoers begin to focus on the details of the Oscar race, and several of the supposed leading contenders, including Alejandro G. Iñárritu’s “The Revenant,” Quentin Tarantino’s “The Hateful Eight” and David O. Russell’s “Joy,” won’t even reach theaters until Christmas. I have now seen all three of those movies, but I face death or excommunication or a period of indentured servitude to Harvey Weinstein, whichever is worse, if I drop any review-type hints. Here are the facts, however: None of those movies has won any major awards from the people who have watched them so far. You can’t rely on critics’ groups and other early voters to provide any solid information about the ultimate winners, but we can say this: The confusing early returns provided this week by the New York Film Critics Circle and the National Board of Review have set the film world atwitter. Like, literally a-Twitter.

As a member of the NYFCC, the nation’s oldest and most aggressively self-aggrandizing critics group, I’m sworn not to reveal any details about our deliberations or our voting process. I can promise you that some of the juicy gossip will leak out to some over-eager blogger somehow or other, but that won’t happen here and anyway it wasn’t all that juicy this year. Todd Haynes’ ravishing 1950s love story “Carol,” with Cate Blanchett and Rooney Mara as lesbian lovers from different social worlds, was the big winner in our group's vote on Wednesday. Indeed “Carol” was the huge winner, sweeping nearly all the plausible categories: best picture, best director, best screenplay (for Phyllis Nagy’s adaptation of Patricia Highsmith’s novel “The Price of Salt”) and best cinematography (by the splendiferous Edward Lachman). I trust I am not violating the gag rule by suggesting that Blanchett and Mara ultimately canceled each other out in the best-actress competition, which is a highly plausible outcome in the Oscar race as well. That award went to Irish actress Saoirse Ronan for another film set in the ‘50s, John Crowley’s immigrant drama “Brooklyn.”

I am personally delighted with those results, because I think Haynes may be the most talented and original American filmmaker of his generation – he is 54, amazingly enough, much younger than the Spielberg-Scorsese generation but no youthful sprite – and because I think “Carol” is not just a landmark work of “queer cinema” (a term Haynes embraces) but one of the great romances of the American screen ever, period. But I definitely do not forecast a similar sweep for “Carol” come Oscar time, not so much because it’s a love story about two women – that is likely to make the academy's aging male core membership want to see it, frankly -- but because it will strike Oscar voters as overly arch and mannered and arty. (To be clear, I do not think it is any of those things. I think it’s a masterpiece.)

At any rate, combine the “Carol” onslaught with the National Board of Review’s embrace of Hollywood populism, which included naming “Mad Max: Fury Road” as best picture and giving three major prizes to “The Martian,” including best director for Ridley Scott and best actor for Matt Damon, and we can only conclude – well, what? That nobody knows anything, in the famous phrase of screenwriting legend William Goldman. A somewhat mysterious group whose members are not exactly critics and not exactly industry insiders, the NBR has an even worse record as an Oscar predictor than the NYFCC: Its last two best-picture selections were J.C. Chandor’s “A Most Violent Year” and Spike Jonze’s “Her,” which won exactly one Oscar between them. Still, many of the Oscar-centric assumptions that were widely shared in Hollywood on Monday morning look dubious or worse now.

We can frame those as a series of questions, whose possible answers will be much discussed this weekend at Beverly Hills restaurants and dinner parties. Is Tom McCarthy’s “Spotlight,” the ensemble drama about the Boston Globe’s investigation of sexual abuse in the Catholic Church, still the academy’s presumptive consensus choice? Because that movie won nothing whatever from the NBR and just one award (Michael Keaton as best actor) from the NYFCC. Are “Carol” and “Mad Max” and “The Martian” all pretty much locked down as best-picture nominees? I would say yeah, absolutely, and a good thing too -- but I am not necessarily more reliable on such matters than throwing the I Ching. In an overcrowded best-actor field, what just happened to Leonardo DiCaprio in “The Revenant” and Eddie Redmayne in “The Danish Girl” and Will Smith in “Concussion” and Michael Fassbender in “Steve Jobs,” big names who gave supremely Oscar-y performances and have been floated as leading contenders? Because those guys won absolutely nothing from these early awards groups, and in fact all four of those movies were ignored altogether. (As were “Joy” and “Truth” and “Sicario,” along with more indie-ish options like “Anomalisa,” “Straight Outta Compton” and “Tangerine.”)

The horse-race answer is that those actors’ Oscar odds definitely took a big hit, and Fassbender and Smith are most likely out of the race before it starts. Based on what I saw and heard during the NYFCC vote but can’t tell you about, I suspect that Michael Keaton really might win his Oscar this year despite all the more famous and more handsome men who are likely to be nominated. If you want to say that’s because he should have won last year for “Birdman” but did not, well OK.

Now we get to the painful follow-up question about whether there will be any actors of color nominated in any of the four acting categories, and I’m afraid that one comes with a troubling multi-part answer. It won’t be easy to manage, but the academy really, really hopes the answer turns out to be yes. I would look past Will Smith as a brain doctor, honestly, to the acclaimed performance by Michael B. Jordan in “Creed,” for one possibility. (Samuel L. Jackson, a universally recognized face and one of the best-loved character actors in Hollywood, has the biggest role in Tarantino’s “Hateful Eight,” but, well … like I said, we’ll talk about that some other time.) The underlying problem is not about a lack of prominent nonwhite roles or non-race-specific roles in one particular year, of course – it speaks to deeper issues in the Hollywood production pipeline about concept development and audience perception and marketing, especially when it comes to the adult-oriented “prestige” films rolled out during awards season.

Saoirse Ronan was already the leading best-actress contender, and in a field that feels a little short on glamorous names and faces (except for Blanchett, a recent winner) she may now be perceived as a sure thing. Mark Rylance’s unforgettable chilly-cuddly turn as an unrepentant Soviet spy in “Bridge of Spies” probably is a sure thing in the supporting actor category, although you have to love the NBR for picking Sylvester Stallone in “Creed” instead. The NYFCC thrust Kristen Stewart’s indie-film career rebuild into the limelight by giving her the supporting actress award for playing a star’s personal assistant in “Clouds of Sils Maria”; an Oscar nomination (but probably not an actual Oscar) would seal the deal. If you choose to accuse our group of honoring K-Stew because we wanted at least one big celebrity to show up for our schmancy January dinner party, along with Rylance and Lachman and Haynes and 85-year-old documentary legend Frederick Wiseman and a bunch of other people the paparazzi won’t recognize, well, I’m shocked that you would even bring that up. Simply shocked.