Today's Trumbo: Try telling academic critics of Israel McCarthyism is behind us 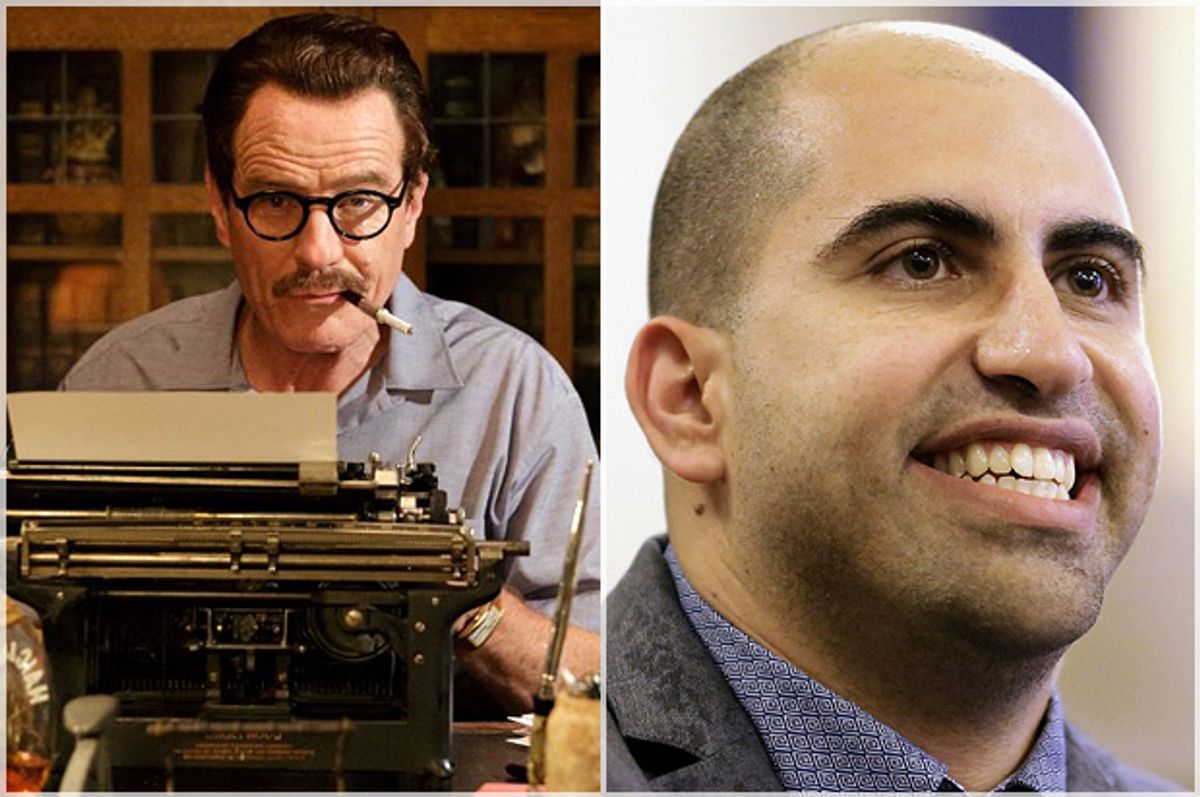 “Trumbo,” starring Bryan Cranston as Academy Award-winning Hollywood screenwriter Dalton Trumbo, tells the sordid and tragic story of the anti-communist witch hunt commonly referred to as the “Red Scare,” which involved the interrogation and prosecution of suspected communists. Its instrument in Congress was the House Un-American Activities Committee (HUAC), created in 1938 and not officially disbanded until 1975, which subpoenaed individuals, put them on the stand, and demanded that they answer one key question, “Are you, or have you ever been, a member of the Communist Party?”  Bear in mind that being a member of the Communist Party was not illegal.  In that respect the Red Scare was not about political affiliation, it was worse—it was about ideas and thoughts.

Sadly, the persecution of those suspected of communist sympathies continued for years, destroying countless careers, and lives. Not only in the entertainment world, but also in academia, in organized labor, and elsewhere.  People were put on a “blacklist,” fired from their jobs and stigmatized, and often imprisoned.

At its conclusion “Trumbo” presents a sense of closure to this moment in history, and it is natural to believe we have put such days behind us. But that is not entirely true. To get a perspective on today’s version of the blacklist, I spoke with one of the prominent academics who served time in federal prison for, like Trumbo, refusing to testify before HUAC.

Chandler Davis, a renowned American-Canadian mathematician and writer, was one of three professors at the University of Michigan who was fired after their refusal to testify.  After six months of imprisonment, in 1960 Davis was released from the Danbury federal penitentiary and moved to Canada, where he taught for several decades at the University of Toronto.  That year he wrote a brilliant and moving essay, “From an Exile,” which tells of his eagerly accepting a teaching position at Michigan, fresh from receiving his doctorate from Harvard:

However, it happened that one summer ten distinguished members of my faculty convened (five at a time) and unanimously declared me guilty of “deviousness, artfulness, and indirection hardly to be expected of a University colleague.” I had refused, first before the House Committee on Un-American Activities and then before these juries of professors, to answer yes or no to the question, was I a Communist. The juries could assume (with that background and in the year 1954) that their recommendation that I be fired would mean my complete expulsion from the profession.

In that essay Davis also asserts that universities that stifle dissent will kill intellectual vitality. Instead, Davis admonishes universities:

You must welcome dissent; you must welcome serious, systematic, proselytizing dissent—not only the playful, the fitful, or the eclectic; you must value it enough, not merely to refrain from expelling it yourselves, but to refuse to have it torn from you by outsiders.

Reading that last sentence, one cannot help thinking of the recent case of Steven Salaita, who was fired from his position at the University of Illinois, Urbana-Champaign, largely at the behest of wealthy donors displeased by Salaita’s sharp and cutting statements on social media critical of Israel’s attack on Gaza in 2014. Davis himself has been a vocal and persistent critic of Israel’s denial of human rights to the Palestinians—every Friday, for the past 13 years, he has led a group in a vigil in front of the Israeli consulate in Toronto. I asked Davis to comment on the contemporary witch hunt aimed at critics of Israel.  He replied:

The freedom lost when vigilantes go after a free-speaking professor is not limited to that professor's freedom.  For every professor whose job is attacked there are dozens whose speaking invitations are dropped in order to avoid controversy; and there are untold hundreds who watch their words to avoid being attacked.  The talks not given, or the opinions not even uttered, add to a loss that can be huge. Watch yourselves!  If Steven Salaita and Norman Finkelstein get back into academic employment, the victory will only be partial, unless we all overcome the inhibitions the attacks are meant to impose.  It will still be our duty to keep up the critical discussion of Israel/Palestine.

Similar to the Red Scare, anyone in 2015 who wants to take a public position that may be perceived to be critical of Israeli policy has to consider the personal and professional risks. We call this the new McCarthyism. Will I be smeared and falsely accused of being anti-semitic or being pro-terrorist? Will I lose my income and my reputation? How will my parents be affected? Can I risk jeopardizing funding for other important projects I'm connected to? This is the reality. Anyone who wants to express questions about Israeli policy must question whether they can risk the practical consequences of being on a blacklist.

A report titled “The Palestine Exception to Free Speech,” produced by the Center for Constitutional Rights and Palestine Legal, finds that:

Between January 2014 and June 2015, Palestine Legal responded to nearly 300 incidents of suppression; 85% of those incidents targeted students and professors, on a total of more than 65 US college campuses. This trend has significant implications for both the First Amendment and democratic principles like academic freedom, not to mention the mission of higher education to help develop critical thinking. The report outlines the tactics – including event cancellations, baseless legal complaints, administrative disciplinary actions, firings, and false and inflammatory accusations of terrorism and antisemitism – that Israel advocacy organizations, universities, government actors, and other institutions have used against activists.

In response to this, the U.S. Campaign for the Academic and Cultural Boycott of Israel has set up academic defense resources.

Meanwhile, what is happening in today’s film industry?

Last year, Penélope Cruz, Pedro Almodóvar, Javier Bardem and others wrote an open letter in a Spanish newspaper denouncing Israel's bombing of Gaza.  Faced with heavy criticism and charged with anti-Semitism for so doing, Cruz and Bardem insisted that their letter was meant to be a call for peace. Lily Rothman at Time wrote of the blowback Zayn Malik’s one #FreePalestine tweet incurred, and even the AP felt obliged to completely revise one tweet it posted critical of Israel.

Yet the Hollywood Reporter has weighed in with an article titled “Why Young Hollywood Is More Willing to Question Israel's Policies.”  It reminds us that “Sharpshooters were stationed on the roof of the Dorothy Chandler Pavilion in 1978 when [Vanessa] Redgrave attended the Oscar ceremony because of death threats she'd received for her support of Palestinians,” but argues that “today, American celebrities tweeting about Gaza get little more than sharp retorts.” Maybe this is a positive sign that something like the blacklist will not recur in Hollywood, that it has learned its lesson from the Hollywood Ten.  So now we have to hope the same goes for academia.