A New Zealand company removes its transphobic ad, but blames it on "due to people taking offense" 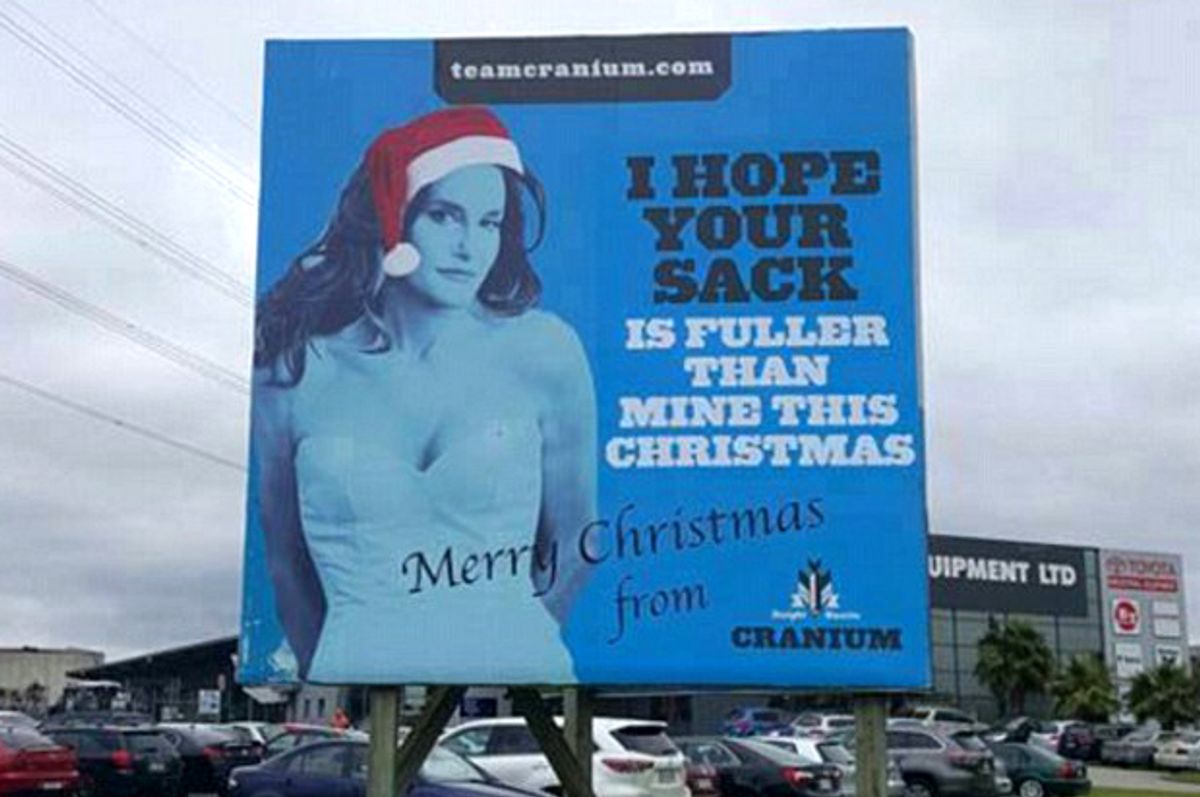 Is it possible that advertising companies have any kind of vetting process whatsoever? Are there meetings in which the phrase "That sounds like it might be offensive?" are ever uttered? I'm asking. Because in just the past few days, Coke had to reconsider if a "white people bestow cola on the natives" ad was a hot idea, Bloomingdales needed to be told that holiday ad campaigns should not insinuate sexual assault, and Amazon rethought green-lighting its choice to festoon a subway car in Axis power imagery. And now in New Zealand the Auckland-based signage company Cranium has issued an apology and made a donation to Rainbow Youth after running a blatantly transphobic holiday billboard.

In the billboard, Caitlyn Jenner's groundbreaking Vanity Fair cover image had been doctored to include a Santa hat, and appeared alongside the greeting, "I hope your sack is fuller than mine this Christmas. Merry Christmas from Cranium." But immediately after the billboard appeared, Cranium found itself quite rightly receiving a flood of criticism and a torrent of emails. After a member of a transgender support group contacted the company to say the ad was "tasteless, crass, vile and insulting," its director Phillip Garratt offered a weak response, saying, "We live in a world with a difference, and I no way discriminate against anyone. I have gay and transgender friends. I think you may need to take a look at yourself and relax a bit and not take life so seriously. I was referring to a Santa sack and your sick mind is the problem."

Oh, sorry for assuming it was a gross joke about the contents of Caitlyn Jenner's underpants! Sorry for wondering why else the company would have run the image!

But by Wednesday, Cranium had covered up the ad — albeit with a giant "censored" sticker — and issued an explanation on Facebook, saying, "We have removed our post and are now removing the sign tonight due to people taking offense. It was not our intention to offend any people in the community/world. I as the owner have no feelings of discrimination to the gay or transgender community and if one of my family was I would love them just the same. Cait is more then [sic] welcome to stay at my house with my family anytime. I will have a wine or a beer with her quite happily and it would be an honor. Lots of love Phil wishing you all a Merry Christmas."

Interesting that there's still no explanation of what, if not to snark on a trans woman, the meaning of the ad was. Because from here it looks like it was playing on age-old myths about transgender people, and ridiculous attempts to define them exclusively by their genitals. May I suggest Phil go listen to Laverne Cox on the subject, specifically the Katie Couric interview in which she explained, "The preoccupation with transition and surgery objectifies trans people. And then we don’t get to really deal with the real lived experiences."

What's in Caitlyn Jenner's pants happens to be nobody's business, because it doesn't matter. It doesn't define her. Male, female, and everywhere on the gender spectrum, we are all a lot more than our sacks or lack of them. And maybe this year, Santa could drop by Cranium early to gift them with a little sensitivity and insight.