"Sometimes you say things that you don't know to be true," O'Reilly said, "which would be a risk as president" 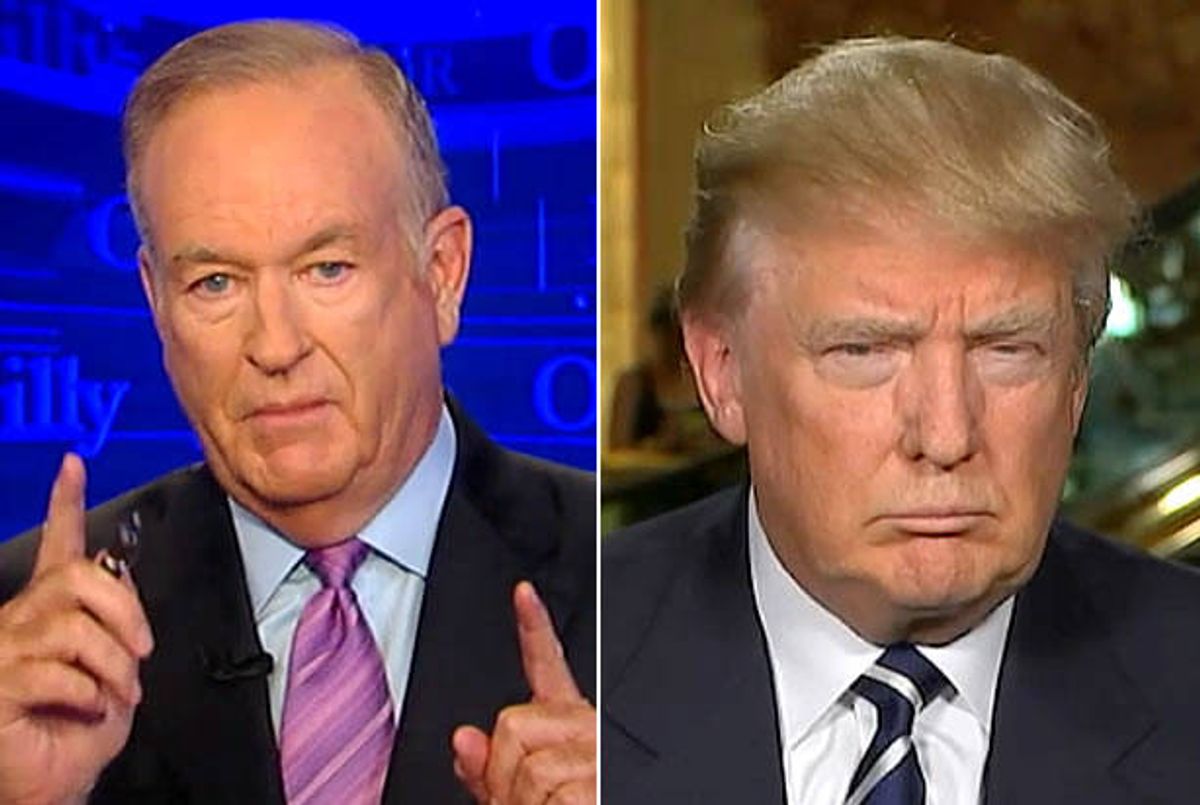 Donald Trump was none-too-pleased that Bill O'Reilly debunked his claim that American Muslims in New Jersey celebrated on 9/11, and he went on "The O'Reilly Factor" to communicate his displeasure in person -- and to announce that he'd been vindicated.

On Tuesday's program, O'Reilly said that “we tried, at Mr. Trump’s request, to get video of any celebrations in New Jersey, but the stations say they don’t have any video. If they did, they would have aired it.”

But on Wednesday, Breitbart's John Nolte published an article in which he claimed, among things, that "[a] just uncovered CBS News report about 'swarms of suspects' cheering 9/11 from rooftops has validated Trump’s 'thousands' claim."

The only problem with Nolte's argument is, as Nolte himself points out -- even if it's only to dismiss the potential objection ahead of time -- that it's difficult to determine the "semantics about how many people are in a swarm[.]" He also noted that "[t]he fact that a certain number were brought into custody does not change the fact that there was a 'swarm.' The obvious impression is that of the 'swarm,' only eight were brought into custody. Eight people do not swarm on all those rooftops. They 'gather.'"

Given that level of linguistic obfuscation -- repoters would've written "gather" if it only involved eight people, he argued, but I can easily imagine someone saying that eight children at a birthday party were "swarming" around a parent or a puppy -- it's difficult even to tell which side Nolte's even arguing.

But Nolte's tenuous argument is enough to convince Trump, who told O'Reilly that "I don't know that I'm wrong, and there is a report that I have been vindicated. We didn't have cell phones and cameras then, but if we did I think you would see it. Look at the soccer game after the Paris attacks when Muslims were shouting during a moment of silence. There's tremendous hatred out there and people are not acknowledging it."

O'Reilly advised Trump to take more care when he speaks, saying that "where you get into trouble is when you give a speech and say there were 'thousands' when there were not. Sometimes you say things that you don't know to be true, which would be a risk as president."

Watch the entire interview with Trump below via Fox News.