Survey of Dems in early primary states shows they're terrified of Rubio, excited about Trump 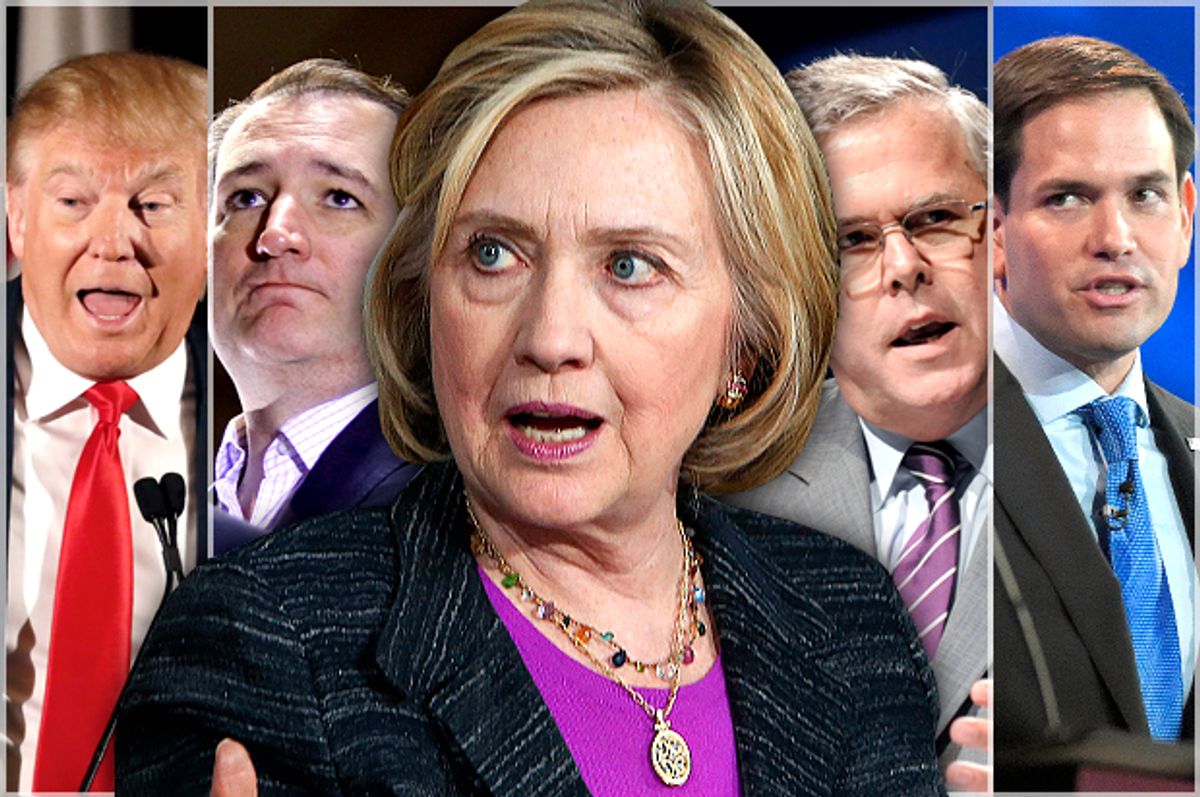 A new Politico survey of Democratic operatives in the first four nominating states – Iowa, New Hampshire, South Carolina, and Nevada – was published this morning and the results are clear: They’re terrified of Rubio and ecstatic about the possibility of a Trump victory.

Trump remains the frontrunner in Iowa and virtually everywhere else, and that’s great news for Democrats on the ground in key primary states. Roughly 60 percent of Democrats in these states say Trump “would be the easiest of the leading GOP candidates to defeat in the general election.”

A Trump-Clinton or Trump-Sanders race would not only hand the presidency to the Democrats, it would also “lead to a Democratic landslide up and down the ballot.” A Trump victory would be a “self-inflicted tsunami for the GOP,” said one New Hampshire Democrat. “Democrats, independents and mainstream Republicans would abandon the top of the ticket and perhaps sweep out Republicans down ticket as well.”

A Rubio victory is a different story, however.

Nearly 70 percent of Democratic strategists think Rubio would be the most formidable opponent among the five GOP contenders. An anonymous Nevada Democrat summed up the general thinking on Rubio: “He does a superb job of using his story in his campaign; of all Republicans, he has the best chance of reaching Hispanic voters; his youth and charisma are contrast to Clinton.”

A Democrat in South Carolina sees Rubio’s youth as particularly worrisome: “Rubio excites audiences that hear him – he’s an optimistic face on regressive policies – which makes him very dangerous.” There’s some truth to this, but it’s likely overstated. Rubio no doubt has some political skill, and so long as he speaks in sound bites, he does quite well. But he’s still inexperienced and mostly untested – that would hurt him in a long general election campaign, especially if it’s a veteran like Clinton on the other side.

Rubio’s greatest asset is his broad appeal within the GOP. More than any other candidate, Rubio has the potential to unite the Republican establishment. “Rubio has support in every lane of the Republican Party,” said one South Carolina Republican quoted in the piece. “We will need that support to win the general election.”

However dangerous Rubio may be, he still has an uphill battle in Iowa and New Hampshire. In Iowa, he remains in fourth place and has almost no chance of surpassing Trump, Carson and Cruz. In New Hampshire, Rubio is more competitive, but he still trails Trump 12 – 27 in the latest polls. Early losses in these states could easily derail his campaign.

The other good news for Democrats is that Ted Cruz is steadily rising in the polls, and he’s becoming a dark horse candidate to win the nomination. “He’s moving in the polls, building his organization, and is peaking at the right time,” an Iowa Republican said. “Love him or loathe him, he’s run a tactically smart race and will surpass Trump to win Iowa.”

Cruz is as well-positioned as anyone on the Republican side right now, and that’s encouraging for Democrats in the early primary states. With the exceptions of Trump and Carson, Democrats agree that Cruz would be the easiest candidate to defeat in a general election. And it’s hard to disagree with that assessment. Cruz appeals mostly to theocrats and Tea Partiers – that plays well in a GOP primary race but not in a general election campaign.

The other two GOP contenders, Jeb Bush and Ben Carson, are essentially non-factors at this point. The Democrats surveyed still believe Jeb is the only candidate outside of Rubio who could unite the establishment wing of the party, but his campaign stalled months ago and has no traction whatsoever. “Unless Jeb starts to pull off some miracles,” concluded one South Carolina Republican, “the establishment will have to turn to Rubio if nothing more than to combat Donald Trump.”

Just a month or so ago, Ben Carson’s stock was on the rise. He was leading in Iowa and surging in the national polls. Now, however, he’s losing the evangelical demographic to Trump and Cruz and he has no other constituency to rely on. While Trump’s bombastic ignorance appears to be the lifeblood of his campaign, Carson’s ineptitude has hurt him badly in recent weeks. He was already losing ground in Iowa, thanks in part to his foreign policy blunders, and his comical performance at the Republican Jewish Coalition meeting this week will likely accelerate his collapse.

For Democrats, then, the race comes down to Trump, Rubio and Cruz. Trump or Cruz would be an unmitigated disaster for the GOP. Rubio would be a challenge, but he’s beatable nevertheless. According to the latest Quinnipiac poll, in fact, both Clinton and Sanders are leading Rubio in head-to-head surveys.

Things could change, of course, but for now the landscape clearly favors the Democrats.