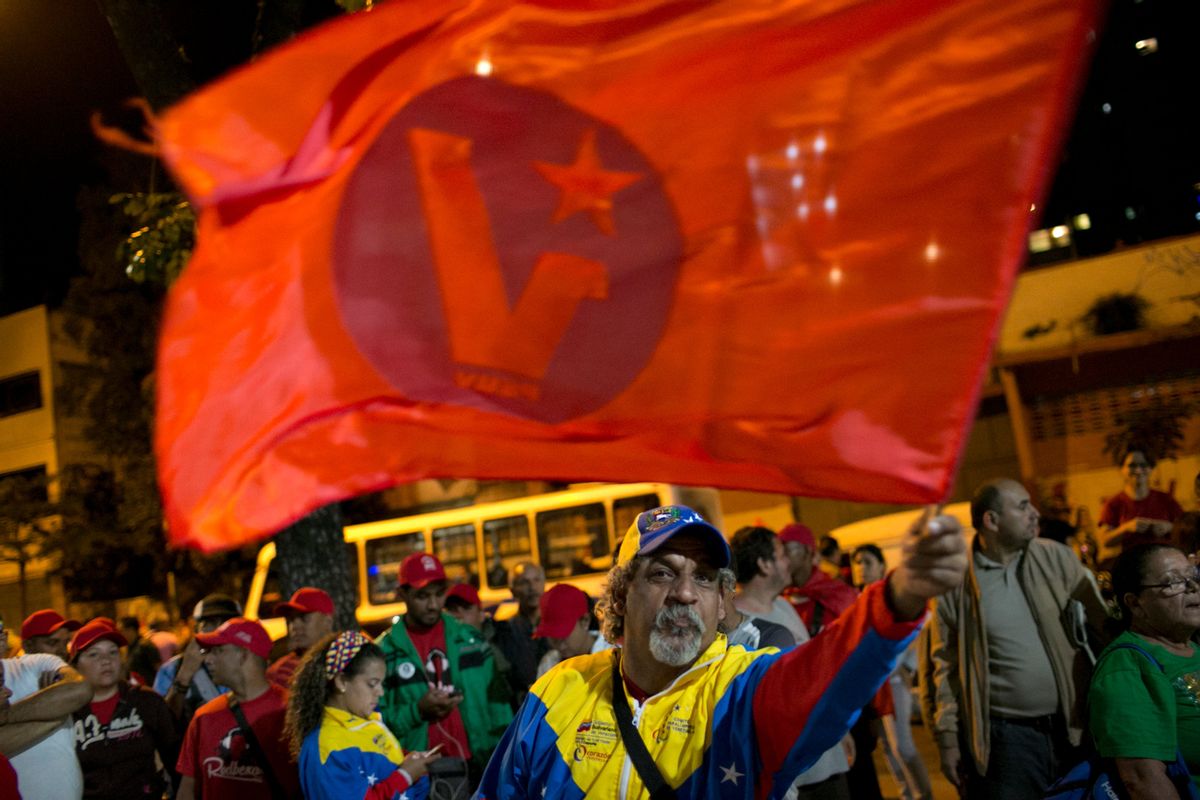 Pro-government supporters, one waiving a ruling party flag, demand that a polling station reopen after its official closing, during congressional elections in Caracas, Venezuela, Sunday, Dec. 6, 2015. Some members of the opposition are angry after elections officials ordered polling centers to stay open for an extra hour, even if no one was standing in line to vote. Government opponents mobbed some voting stations demanding that the National Guard stick to the original schedule of closing at 6 p.m. (AP Photo/Alejandro Cegarra) (AP)
--

Venezuela's opposition won control of the legislature in the election Sunday, for the first time in almost two decades.

The president of the country's National Electoral Council told the Associated Press that the Democratic Unity Roundtable (MUD) -- a right-leaning coalition of right-wing, centrist, and center-left opposition parties led by conservative politician Henrique Capriles, head of the right-wing Justice First party -- won at least 99 seats in the 167-seat National Assembly, while the United Socialist Party of Venezuela (PSUV) won 46.

For 17 years, the PSUV has enjoyed enormous popularity in Venezuela. Its economic and social programs drastically reduced poverty, created universal healthcare, and promoted widespread literacy and education. Compared to its Latin American neighbors, Venezuela has consistently led the region in reducing poverty.

In recent years, the Venezuelan economy has faced turbulence and rising inflation. Venezuela has the world's largest oil reserves, and the rapid drop in the price of oil has hit it particularly hard.

The opposition, which blames the government's left-wing policies for the instability, has capitalized on the turmoil. Supporters of the government, on the other hand, say powerful business oligarchs, corporations, and foreign governments -- especially the U.S. -- have pursued policies of economic sabotage in Venezuela. This view is supported by the information revealed in U.S. government documents released by WikiLeaks.

After the election, President Nicolás Maduro -- who was elected after the death of Hugo Chávez in 2013 -- lamented in a televised address, "I can say today that the economic war has triumphed."

The electoral victory marks the first time a right-wing government will rule Venezuela in this century.

Although Venezuela's democratically elected socialist government has been widely characterized by the right wing as a "dictatorship," in 2012, former President Jimmy Carter -- who won a Nobel prize for his international election-monitoring work through the Carter Center -- remarked, "As a matter of fact, of the 92 elections that we've monitored, I would say that the election process in Venezuela is the best in the world."

Under the PSUV, Venezuela has been known for its harsh criticism of U.S. foreign policy. In 2006, President Chávez called George W. Bush a "devil" in a speech to the United Nations General Assembly, in comments met with applause from the audience. Chávez also referred to President Bush as a "donkey."

The State Department later admitted, "it is clear that NED [National Endowment for Democracy], Department of Defense (DOD), and other U.S. assistance programs provided training, institution building, and other support to individuals and organizations understood to be actively involved in the brief ouster of the Chávez government."

A week after the 2002 coup, leading British newspaper the Guardian reported that the "failed coup in Venezuela was closely tied to senior officials in the U.S. government."

The U.S. has "long histories in the 'dirty wars' of the 1980s, and links to death squads working in Central America at that time," the Guardian added. "Washington's involvement in the turbulent events that briefly removed left-wing leader Hugo Chávez from power last weekend resurrects fears about U.S. ambitions in the hemisphere."

Since 2002, the Venezuelan government has accused the U.S. numerous times of supporting further coup attempts. Washington denied that it was pursuing regime change in Venezuela -- although the U.S. has, stretching over many decades, overthrown numerous democratically elected left-wing governments in Latin America.

In March 2014, the Obama administration declared "a national emergency with respect to the unusual and extraordinary threat to the national security and foreign policy of the United States posed by the situation in Venezuela," in a move Center for Economic and Policy Research Director and Just Foreign Policy President Mark Weisbrot characterized as "a new step toward the theater of the absurd."

For a four-month period in Venezuela in 2014, right-wing opposition groups resorted to violent protests. Even after nine Venezuelan national guardsmen were killed, the U.S. government was firm in its support for the opposition.

This is the second loss of the Latin American left in the past month. Argentina elected right-wing, U.S.-educated banker and businessman Mauricio Macri in late November in a very close race.