Let's applaud Fisher, who reprises her iconic role as Leia, for her commentary on ageism, sexism and fandom 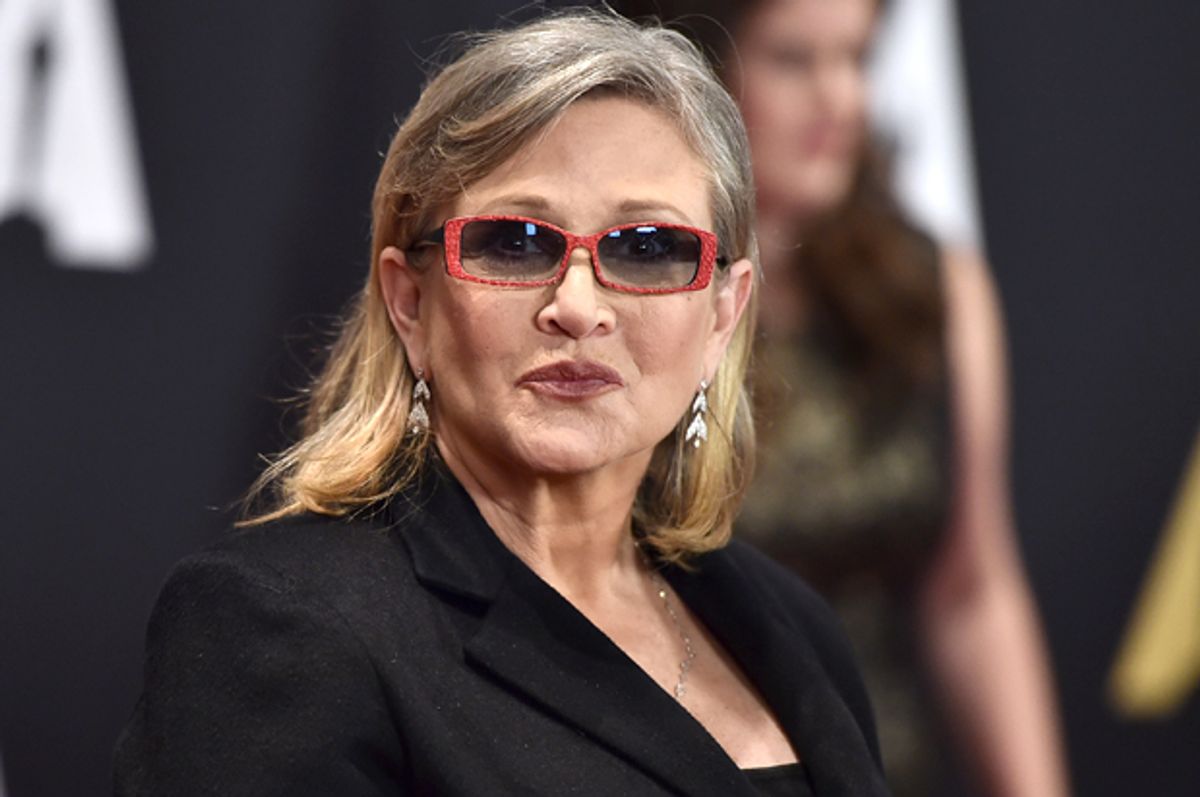 Even if you're someone who's always been only "meh" about the "Star Wars" empire, the imminent release of "Star Wars: The Force Awakens" is nonetheless cause for nonstop rejoicing. Because where's there's "Star Wars," there's Carrie Fisher.

Fisher, currently competing with the New York Daily News for the title "Legendary American Institution with the Fewest F__ks to Give," has been making the media circuit to promote the forthcoming installment of the saga, and it's damn glorious. Because Carrie Fisher — actress, memoirist, former Jenny Craig spokeswoman, self-described poster child for bipolar disorder — is not having your nonsense.

Speaking last week with the Wall Street Journal, the woman who has famously explained that "I swear when I was shooting those films I never realized I was signing an invisible contract to stay looking the exact same way for the rest of my existence" nonetheless embraced her iconic identity, saying she never hesitated about returning as Leia. "I’ve been this character for 40 years, why would I not? Because I’m going to be associated with Princess Leia more? There is no 'more.' And I’m a female working in show business, where, if you’re famous, you have a career until you’re 45, maybe. Maybe. And that’s about 15 people."

And she replied to journalist Michael Calia's observation that "There’s been some debate recently about whether there should be no more merchandise with you in the 'Return of the Jedi' bikini" with a terse, "I think that’s stupid." She added, The father who flipped out about it, 'What am I going to tell my kid about why she’s in that outfit?' Tell them that a giant slug captured me and forced me to wear that stupid outfit, and then I killed him because I didn’t like it. And then I took it off. Backstage."

On Friday, she appeared in a one-of-a-kind interview on "Good Morning, America," with her dog Gary perched in his own chair next to her. You knew it was going to be good when she started by candidly saying, "I wouldn't be anywhere else at this hour — except on TV." She cheerfully offered Gary's take on the new film, saying, "He panted all the way through it; I think it was too loud. It was his first real screening." Asked if she had to be convinced to sign on for another episode of the series, she deadpanned to Amy Robach, "They don’t have to ask you if you want to work at that age… you’ll see someday." And when asked gently about how she "transformed" for the role, she admitted, "Yes, I did lose weight, and I think it's a stupid conversation," adding, "You’re so thin, let’s talk about it. How do you keep that going on? You exercise every day? And isn't it boring?"

The thought that Fisher — whose Twitter feed is full of insights like "You know those days when things keep getting worse faster than U can lower your standards?" — likely has even more chances to play the media like a damn violin in the weeks to come is the best thing to happen to December since ugly sweater parties.

Hollywood is a different place from the one Fisher came of age in as the child of two reigning stars, and a different one from the town where she later promoted herself as a young actress. Actors, thanks to social media, regularly communicate directly with their audience. And in interviews, they're likelier to question tired comments about being an "it girl" or their "rabbit food" regimens than a generation ago. Actresses in particular are less likely to smile blandly and put up with inane commentary about their hair length or their manicures.

But Fisher, with all the grandness of Hollywood royalty and all the defiance of a woman who's been to hell and back a thousand times already, sets the bar higher than anyone. "I got in character and I've never gotten out again," she told Robach on "GMA," "and really, I've tried everything." But while Leia was princess who's become a general, Fisher is now and ever will be just one thing: a queen.