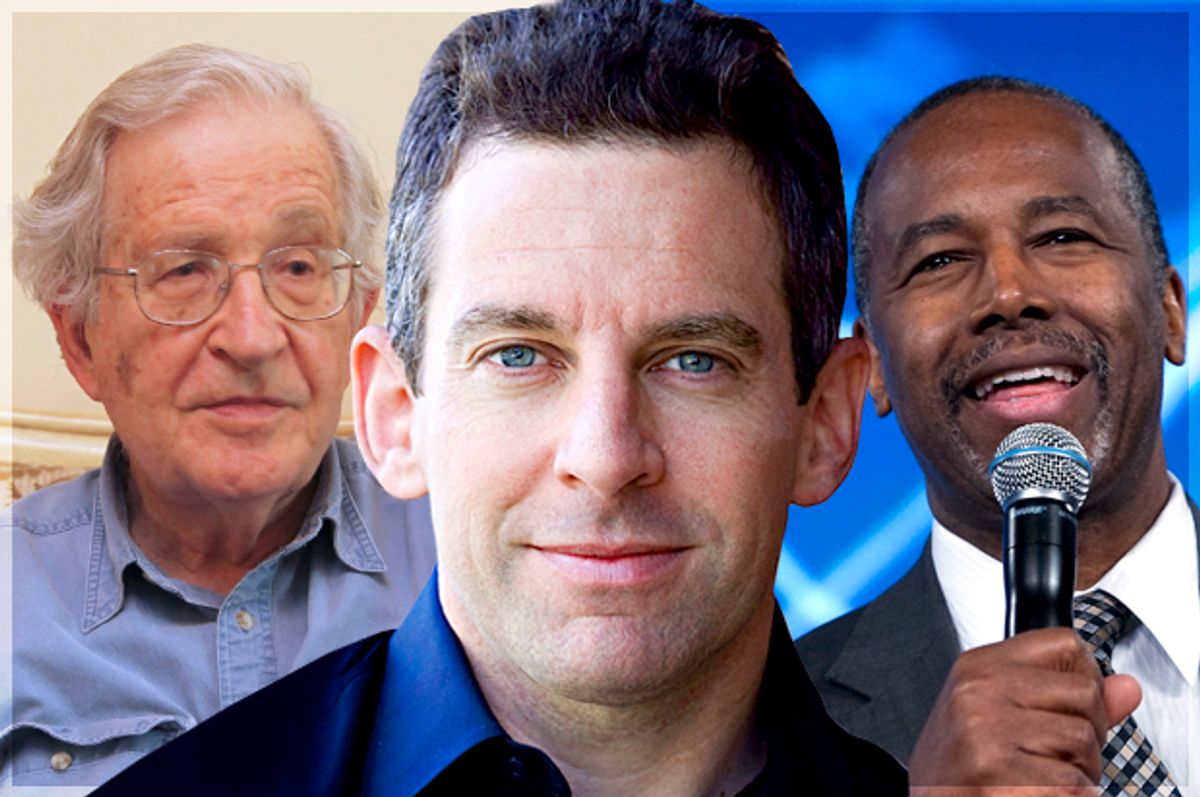 Anti-religious prophet Sam Harris has, once again, exposed the conservatism at the heart of the so-called "New Atheist" movement.

In the November episode of his "Waking Up" podcast, Sam Harris spoke with seasoned neoconservative pundit Douglas Murray about Islam, liberalism and the refugee crisis. Harris frequently flexes his liberal bona fides, yet the two spent much of the conversation in agreement. The neuroscientist even called the right-wing writer "one of the best people on this topic."

The title of the episode alone, "On the Maintenance of Civilization," says a lot. Harris is wont to argue that Muslims threaten the very fabric of Western civilization.

"Given a choice between Noam Chomsky and Ben Carson, in terms of the totality of their understanding of what’s happening now in the world, I'd vote for Ben Carson every time," Harris said in the podcast, without hesitation.

"Ben Carson is a dangerously deluded religious imbecile… The fact that he is a candidate for president is a scandal," Harris continued. "But at the very least he can be counted on to sort of get this one right. He understands that jihadists are the enemy."

Salon reached out to Chomsky for a response to Harris' comments. Chomsky didn't want to discuss Harris in detail, whom he accused of spreading "ignorant lies."

In reply to Harris' accusation that Chomsky would pursue a more perilous foreign policy than someone Harris readily admits "is a dangerously deluded religious imbecile" (and whose own advisers admit struggles with grasping basic facts surrounding international conflicts), Chomsky said, "A person who makes charges like that either provides evidence, or is telling us, loud and clear, that he merits only contempt. I presume that he provided no evidence."

"I have no interest in Harris' performances, which is why I've never bothered to comment on them, except in response to queries," Chomsky added. "It's not my affair."

Chomsky is one of the most outspoken and principled voices on the American, or even global, left. He has always vigorously rejected dogma and steadfastly opposed violence and bigotry. It's in fact his consistency, and his firm opposition to ideological conformity, that often gets him in trouble with not just conservatives and liberals, but even with fellow leftists.

Yet Harris will have none of this. Why? Because Harris is himself a fanatic. And although he's a fanatic of the anti-religious stripe, he and Carson can find common ground in their anti-Muslim fanaticism.

It is such anti-religious fundamentalism that overrides New Atheists' politics, placing them progressively (or rather, to draw on Harris' terminology, regressively) further to the right.

This is by no means the first time Harris has expressed approval for far-right politicians. Harris' remarks vis-à-vis Ben Carson are strongly reminiscent of his public insistence, in a 2006 op-ed in the Los Angeles Times, that "The people who speak most sensibly about the threat that Islam poses to Europe are actually fascists."

A little less than two years before speaking positively of fascists, Harris asserted in no uncertain terms, in an op-ed in the right-wing Washington Times, "It is time we admitted that we are not at war with 'terrorism.' We are at war with Islam."

Like the fascists whose Islamophobic ramblings he deems sensible, Harris constantly speaks of the need "to protect [Western] civilization from its genuine enemies" -- to quote his LA Times op-ed. And who exactly are Western civilization's ostensible "enemies"? Harris insists they are "backward" Muslims (yes, he does use the word "backward"). In an article published in Truthdig in 2006, Harris wrote:

"Throughout Western Europe, Muslim immigrants show little inclination to acquire the secular and civil values of their host countries, and yet exploit these values to the utmost — demanding tolerance for their backwardness, their misogyny, their anti-Semitism, and the genocidal hatred that is regularly preached in their mosques."

Such beliefs, that Muslim immigrants are little more than uncivilized savages, have led Harris to support fundamentally anti-liberal policies, such as racial profiling; torture, in some cases; and even, if he saw it fit, preemptive nuclear war.

Harris reminds one of the liberal intellectuals who steadfastly defended the internment camps Franklin Delano Roosevelt created for Japanese-Americans during World War II, in the name of "defending liberal values." He is so blindly insistent on defending what he calls Western civilization that he never stops to consider, even for a moment, what exactly it is he means by Western civilization, and what exactly he is saving, from whom. After all, the genocide of the indigenous peoples of the Americas, the transatlantic slave trade, eugenics, Italian Fascism, and Nazism were all products of the West's apparently irreproachable civilization. One can just as easily selectively emphasize the crimes of Western civilization as one can selectively emphasize the crimes of Islamic history.

Numerous other examples of similar comments can be found. Harris and his fans, who are themselves uniquely fanatic disciples, frequently insist such statements are taken out of context, yet they are anything but -- and readers are welcome to look up the original sources and see for themselves.

In his preference for far-right religious fundamentalists over a leading leftist intellectual like Chomsky, Harris, the intractable atheist proselytizer, appears to be slipping even further into fascist apologism.

Consonant with such apologism is the fact that, in the above interview, Harris also sided with ultra-conservative GOP presidential candidate Ted Cruz, insisting that "preference for Christians over Muslims in" refugee vetting is entirely reasonable. That is to say, on behalf of "defending liberal values," Harris maintains that it would be completely justified for the U.S. to turn away refugees fleeing extreme violence if they are of the wrong religion. (Compounding the irony is the fact that many Syrian refugees are in fact Muslims fleeing ISIS' brutality.)

One wonders if Harris would have said the same about the Jewish refugees fleeing the Holocaust who were turned away by an America that, at the time, was rife with anti-Semitism — an anti-Semitism based on myths that are eerily similar to the Islamophobic ones pervading society today.

What comments like these, from throughout the past decade, expose is not that Harris' politics have suddenly become right-wing, but rather that the politics of the New Atheists have always been fundamentally reactionary. It's no coincidence that the late Christopher Hitchens became virtually indistinguishable from the leading neocons in his final years, as his anti-religious fervor grew and grew. Harris has merely become more blatant in his broadcasting of just how reactionary their ideas are to the world.

The cost of civilization

The real-life effects of these ideas are nothing less than chilling, and a glimpse, if only briefly, at a case study is instructive.

Fellow anti-religious zealot Ayaan Hirsi Ali exemplified the inherent conservatism of New Atheism in her lionization of Egypt's brutal Western-backed dictator Abdel Fattah el-Sisi. Sisi violently overthrew Egypt's first and only democratically elected government. A month after toppling Egyptian democracy, Sisi massacred at least 817 and likely more than 1,000 peaceful protesters at Raba'a Square, in what human rights organizations called a crime against humanity. His regime militarized Egyptian society. His soldiers shoot protesters in the street. In the past two years, he has locked up tens of thousands of dissidents, primarily from the Muslim Brotherhood and left-wing parties, and doled out mass death sentences to hundreds of people at a time.

In an interview with the Huffington Post, Ali characterized Sisi as a "special" reformer. "He's not only locking them up; he also wants to engage intellectually, and he also wants to engage with what is it about the religion that is wrong. And I think we need to give him that." In Ali's eyes, Sisi is an enlightened despot, and his religious beliefs are what make all the difference.

Once again, the irony of this -- like the irony in Harris siding with Carson -- is that Egyptian dictator Sisi is in fact waging a "war on atheism" in his own country. But, again, New Atheist opportunism abandons ideology and puts such differences aside in order to unite against the purported common enemy: Islam.

What this goes to show is that, at the end of the day, many New Atheists would rather have a quasi-fascist yet nominally secular dictatorship than a democratic moderate Islamist government.

It is this same logic that leads Harris et al. to staunchly defend Egypt's neighbor Israel -- even while Harris admits that it is "obscene, irrational, and unjustifiable to have a state organized around a religion." He recognizes that Israel -- which has militarily occupied Palestinians' land and lives, in flagrant contravention of international law, for decades -- has committed war crimes, but argues such atrocities are justified "due to the character of their enemies," whom he caricatures as Islamist monsters.

To the New Atheist, as long as brutal Western-backed dictators like Sisi or violent religious militarily occupying powers like Israel defend Western civilization, it does not matter how much blood they spill. (This is naturally quite easy to say when it is not your blood being spilled.) Such is the price of preserving civilization.

In the aforementioned interview, Harris and neocon guest Douglas Murray mutually lamented that they have become martyrs for the cause of defending Western civilization. Murray bemoaned that political affairs are distracting him from bourgeois literature, namely the newest edition of T.S. Eliot. Harris said writing about politics was "an extraordinary opportunity cost" that causes great "boredom." While he supports catastrophic Western wars that permanently end the lives of myriad people on the other side of the ocean, Harris portrays himself as a martyr who must devote himself to politics, which he calls a "distraction" detracting from work and "amusement." Yet, again, such is the price of preserving civilization, he insists.

Harris' belief, doubtless genuine, that he is acting on behalf of "civilization" is oddly reminiscent of the "White Man's Burden," held by turn-of-the-century colonialists who saw themselves as civilizers making great sacrifices to bring progress to the "backward" barbarians they ruthlessly colonized.

Defense of Western civilization is the burden Harris and his ilk have placed upon their shoulders. They carry the weight of the world, in their view. They have turned themselves into anti-religious martyrs -- into self-styled secular shahids, if you will, to reference the Arabic term. And their allies in their anti-Muslim jihad are Christian fundamentalists who fancy themselves contemporary crusaders.