A Golden Globes victory for women: There's life and prestige after 40 for actresses, after all

Nods for Jennifer Jason Leigh, Maggie Smith, Jane Fonda and Lily Tomlin are good news for all women in Hollywood 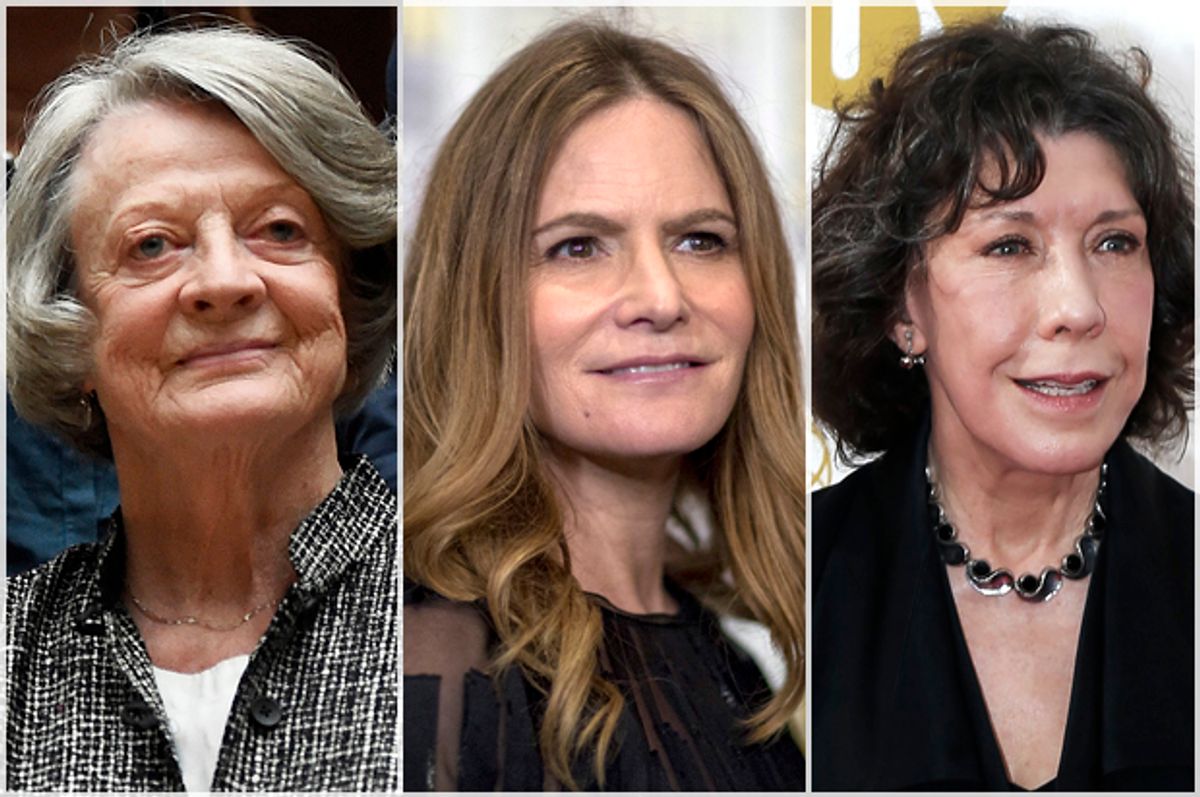 If you can count on one thing when it comes to the Golden Globes, it’s that you can never count on anything.

The insular Hollywood Foreign Press Association released its yearly slate of nominees this morning—which covers both TV and film—and the results were characteristically kooky. The HFPA apparently liked “Outlander” (nominating it for three awards), while recognizing the artistic contributions of Wiz Khalifa and Ellie Goulding—both of whom earned Best Original Song mentions. And throughout the land, a curious sound rung out Thursday morning, one that made the animals stir. Was it the clompety-clomp of the Four Horsemen of the Apocalypse? Close. It was the announcement of “Golden-Globe nominee Lady Gaga,” a curious cry that may never be unheard.

But aside from the usual head-scratching, the Golden Globes offered a refreshingly diverse crop of nominees. Will Smith (“Concussion”) and Idris Elba (“Beasts of the Southern Wild”) were recognized in the film acting categories, while Taraji P. Henson (“Empire”), Viola Davis (“How to Get Away with Murder”), Gina Rodriguez (“Jane the Virgin”), Aziz Ansari (“Master of None”), and Gael Garcia Bernal (“Mozart in the Jungle”) all earned TV noms. It was a great year for women in particular: Todd Haynes’ masterful lesbian romance “Carol” led the film pack with five nominations: Picture, Director, Screenplay, and bids for both its actresses. Meanwhile, female-driven movies dominated the Musical/Comedy category—with “Spy,” “Trainwreck,” and “Grandma” all making the cut.

You don’t often hear the words “Hollywood,” “diversity,” and “good job” in the same sentence (or even adjacent ones), but this morning’s lineup was a definite step forward for an awards race tarnished by last year’s #OscarsSoWhite conversation. It’s beyond great to see Elba and Smith’s names on the list, giving them much-needed boosts in the Oscar race, but the more surprising thing about this year’s pool that it includes a group too often snubbed at awards ceremonies: veteran actresses. Jennifer Jason Leigh (“The Hateful Eight”), Helen Mirren (“Trumbo”), Jane Fonda (“Youth”), and Kate Winslet (“Steve Jobs”) are all at least 40 years old, and the only upstart in the category is Alicia Vikander—the Danish actress who earned two nods for her astonishing work in “The Danish Girl” and “Ex Machina.”

Last year’s age gap tends to be the norm at awards ceremonies. In both the Supporting and Lead categories, male Oscar nominees tend to be a decade older than their female counterparts. In the history of the Academy Awards, no man under 30 has ever won Best Actor, while a ton of Best Actress winners have all been under 30—in fact, there have been 30 of them. The last was Jennifer Lawrence—just 22 when she took home the gold for “Silver Linings Playbook.” The man who won alongside her—Daniel Day-Lewis was 55 years old. In 2011, the 29-year-old Natalie Portman earned her first Oscar for Darren Aronofsky’s ballet psychodrama “Black Swan,” while Colin Firth—who finally took home the trophy for “The King’s Speech”—was 50.

This isn’t an awards show problem but a greater industry issue—where Hollywood veterans are routinely paired across from much younger actresses. As a 2013 infographic from Vulture’s Kyle Buchanan points out, “leading men age, but their love interests don’t.” While actors like Tom Hanks routinely share the screen with age-appropriate women, Steve Carell, Richard Gere, and George Clooney’s love interests have trended younger over time; in the past five years, the now 53-year-old Carell—currently starring in “The Big Short”—has wooed Keira Knightley and Olivia Wilde, while Clooney bagged Vera Farmiga and Italian actress Violante Placido (in the little-seen “The American”). In 2012’s “Arbitrage,” Gere was 29 years older than his leading lady.

You know Hollywood is sexist. I know Hollywood is sexist. I’m sure even Hollywood knows Hollywood is sexist. And recently, actresses like Carrie Fisher have been calling out the industry’s toxic treatment of women—especially when it comes to age discrimination. My colleague Mary Elizabeth Williams covered Fisher’s incredible press tour for “The Force Awakens,” in which the no-holds-barred actress has bluntly spoken truth to power. Here’s what she said when asked about returning to her iconic “Star Wars” role: “I’m a female working in show business, where, if you’re famous, you have a career until you’re 45, maybe. Maybe. And that’s about 15 people.”

Other actresses—whether veterans or ingenues—have been joining the party when it comes to criticizing industry ageism. Helen Mirren called it “fucking outrageous” and “ridiculous.” Emma Thompson deemed it “insane.” There’s also been Maggie Gyllenhaal comments about being deemed “too old” to play a 55-year-old man’s girlfriend—at 38—and Kristen Stewart, who claimed that she dropped out of the Will Smith con movie, “Focus,” because she was worried about the two decade age difference with her 47-year-old co-star. She was replaced by Margot Robbie, who is 25. Meryl Streep, on the other hand, said that she was offered plenty of roles as an aging actress in Hollywood: After turning 40, everyone wanted her to play a witch.

If these women are speaking up about how difficult it is to be a “woman of a certain age” when all you get offered are long-suffering wives, mothers, and witches, the Golden Globes are actually doing something about it—by recognizing the women who continue to be trailblazers in their field. Actresses like Kate Winslet, Jennifer Jason Leigh, Jane Fonda, and Helen Mirren aren’t just over 40; these are incredible role models and icons who have helped open the door for every woman that came after them. In “Youth,” Fonda steals the movie with a monologue that doubles a look back at her own career as a firebrand and cultural lightning rod. “I don’t owe anybody anything,” she boasts. “I did it myself!"

That may or may not be true, but it’s everyone else who owes women like Fonda something—both for the glass ceilings they have broken and the ones they will continue to bust. A Golden Globe nomination is a good start.