Rep. Steve King challenges Muslim American Congressman's allegiance to the U.S.: "Which is superior, the Constitution or Sharia law?"

King not only targets his colleague, Rep. Keith Ellison, but also parrots an Alex Jones conspiracy theory on MSNBC 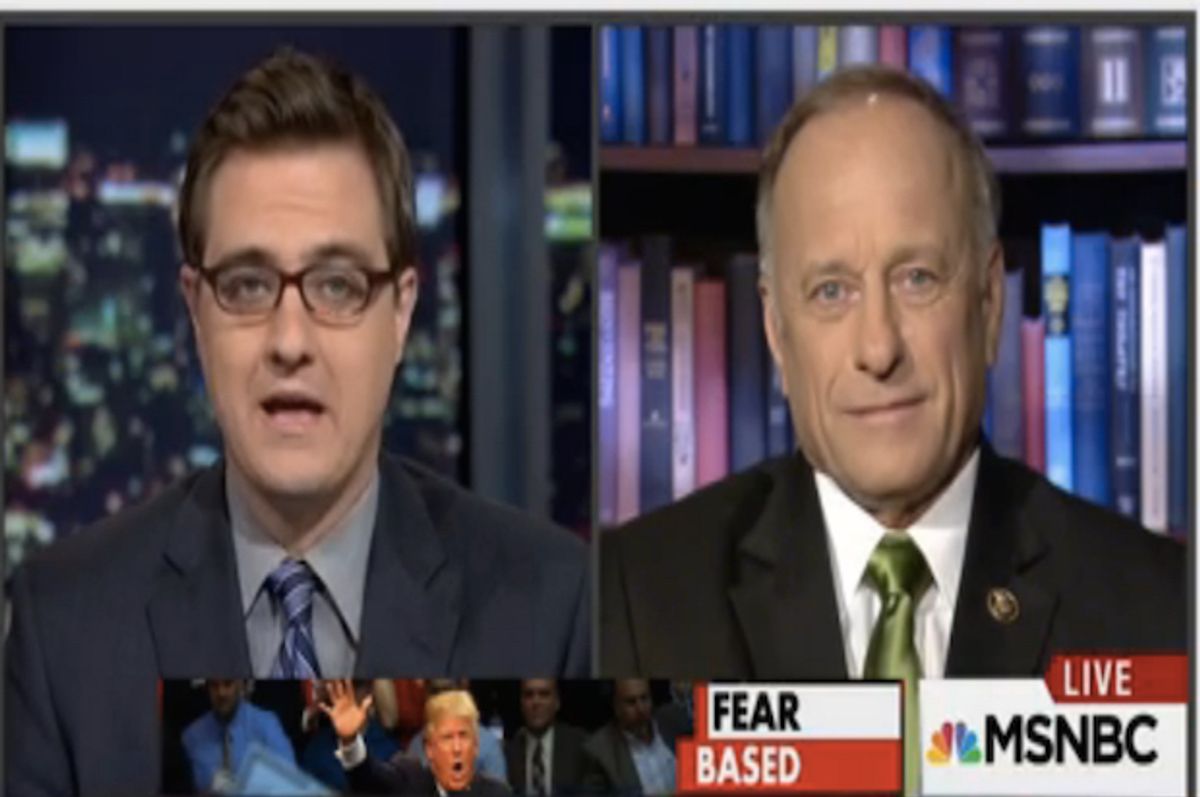 Two weeks after his last appearance on "All In with Chris Hayes," Iowa Republican Congressman Steve King returned to the MSNBC show to, once again, attempt to convince viewers that Islam is an inherently violent religion, fundamentally opposed to American democracy and this time, King amped his Islamophobia up a notch to openly challenge the loyalties of his Muslim American Congressional colleagues.

"Sharia law is incompatible with the United States Constitution and so if they want to demonstrate that they are open to being Americanized, the first thing they should do is renounce Sharia law," King said during an interview with Talking Points Memo Wednesday afternoon. King has previously argued that Muslims have failed to "assimilate" into the broader American culture. "You won't get Keith Ellison or Andre Carson in this Congress to renounce Sharia law, let alone somebody that's just come out of the Middle East that is someone who has been steeped in Islam for a lifetime," King said of his Congressional colleagues. King also thanked Donald Trump for proposing a ban on all Muslims from entering the United States, although he declined to fully endorse Trump's ban.

Appearing on MSNBC later that day, King was asked about his assumption that his Muslim Americans colleagues, Rep. Keith Ellison and Rep. Andre Carson, would not renounce Sharia law. Ellison was also a featured guest on "All In" to respond to King.

When Hayes grilled King on the hypocrisy of his sweeping generalizations, pointing out that Robert Dear, the man who opened fire at a Colorado Springs was a Christian radical who claimed "he was a warrior for the babies," King dismissed Dear as simply unrepresentative of the Christian faith:

HAYES: That man is a Christian. He's an avowed Christian. He appears to have acted on those Christian beliefs to undertake that act of violence.

HAYES: But who are you to say? He says he's a Christian.

KING: That's what he says, all right. But that's not Jesus' teachings. Jesus didn't teach people to kill.

HAYES: But you're doing the exact same thing that every Muslim I'd seen on air do in the wake of what happened in San Bernardino. They say they weren't following actual Islam. Islam does not preach hatred and violence and destruction, right? I mean, why is this any different?

You understandably as a Christian, as someone of the faith, right, you look at what happened at Planned Parenthood, you said that`s not the faith that I believe in. Millions and billions --

KING: What Planned Parenthood is doing is not the faith that I believe in, but Jesus never ordered anyone to be killed and he never raised his hand to injure anyone specifically. But Mohammed did and there is a big difference in this. And so, theyre carrying on the traditions that are centuries old --

King went on to tell the story of an imam who encouraged migrants to "breed" with European women in order to "infiltrate" without having to "assimilate" into the culture. The anecdote, as Hayes noted, is a conspiracy theory propagated by right-wing Alex Jones website Infowars.

Immediately after King's interview, Hayes hosted Rep. Ellison to respond to his colleagues' challenge to his patriotism. "All I'd like to say is that I am a patriotic, loyal American," Ellison responded to King. "I love my country and the values that it stands for. And I am a Muslim":

These two value systems do not clash in any way, and my son is a member of the United States Armed Forces active duty. He's proud to serve his country. And there are many more people who are exact same thing.

Muslims are absolutely integrating into the United States. You can go nearly any community and you find people opening up clinics that mostly non-Muslims go in to get services. They are feeding people who are hungry, American citizens, mostly people who are not Muslim. They're running for office.

Andre Carson is another member of Congress and there are many other state legislators and city council members. Muslims are a part of the fabric of this country. By the way, they always have been, and more so now than ever.

So, I think Mr. King is absolutely wrong and I just hope that we can try to reach higher ground, because when you are spewing this kind of nonsense, things that Mr. Trump says, Dr. Carson says, but also Rubio and Cruz and even Jeb Bush have said, you know, these things are I think divisive, they're distracting and they're deceptive, and I think good people need to stand up and reject them.

Watch both King and Ellison, via MSNBC: