Sinking in the polls, the GOP hopeful berates Chris Cuomo for calling out her ceaseless Planned Parenthood lies 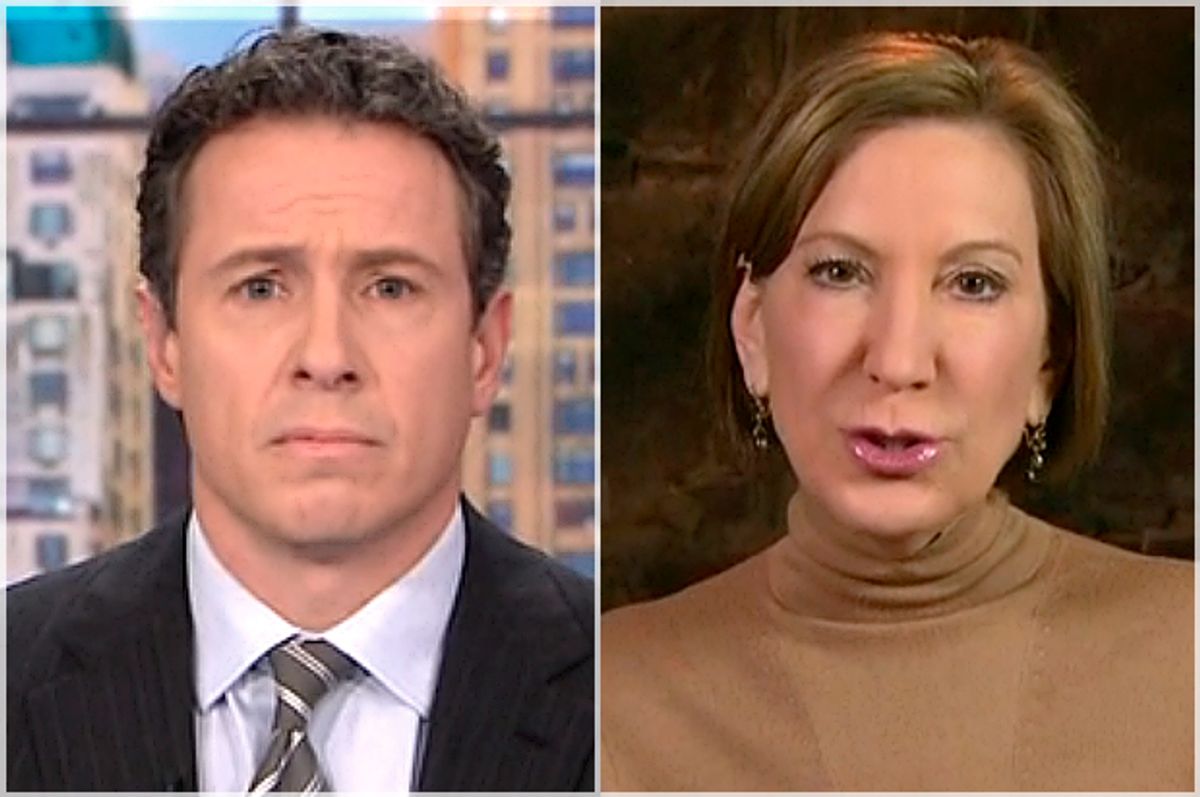 Fading Republican presidential hopeful Carly Fiorina appeared on CNN's "New Day" Friday only to discover that co-host Chris Cuomo remembered he was a journalist and was intent on holding her feet to the pro-life fires she's been stoking since this summer.

Cuomo suggested that the man who shot up a Planned Parenthood clinic in Colorado, Robert Dear, was "influenced by some of the rhetoric that was coming out of you that painted a very ugly, unfair picture of Planned Parenthood."

"Oh really, Chris?" Fiorina testily replied. "There have been nine videos, it is very clear what Planned Parenthood have been doing. Several weeks ago, Planned Parenthood made a quiet little announcement that they would no longer accept compensation for what they call 'fetal tissue.' That's about as close to an admission [of guilt] as you can get."

"That's not what they say," Cuomo said, only to be shouted down by Fiorina.

"Look," an irate Fiorina replied, "what happened in Colorado was a terrible thing. This guy is a deranged murderer who should be put away for life, but that has nothing to do with the truth of what is going on in Planned Parenthood."

"This is a typical left-wing tactic," she continued, regaining her calm cliché by cliché, "of trying to shut down the truth by silencing people. This has happened over, and over, and over again."

Cuomo, clearly exasperated by Fiorina's theatrics, replied that "the question doesn't go away -- the videos were edited, you know that."

"I don't know that!" Fiorina fired back, secure in her belief that if she repeats the same lie enough times, people will believe it. "There has been forensic evidence of those nine video tapes over and over again, and there have been reports that they were not edited."

"Of course they were edited," Cuomo said. "Let's be careful about what we're saying."

"Oh really, really, Chris?" Fiorina said, her composure now clearly flagging. "I don't recall -- and careful Chris, you're a journalist -- I don't recall anybody in the pro-life community celebrating this tragedy." Unfortunately for Fiorina, the standard of evidence isn't what she does or doesn't recall, and many conservatives did, in fact, celebrate Dear's attack on the clinic.