Bill Cosby can't win back his legacy now: It's too late to intimidate his accusers into silence 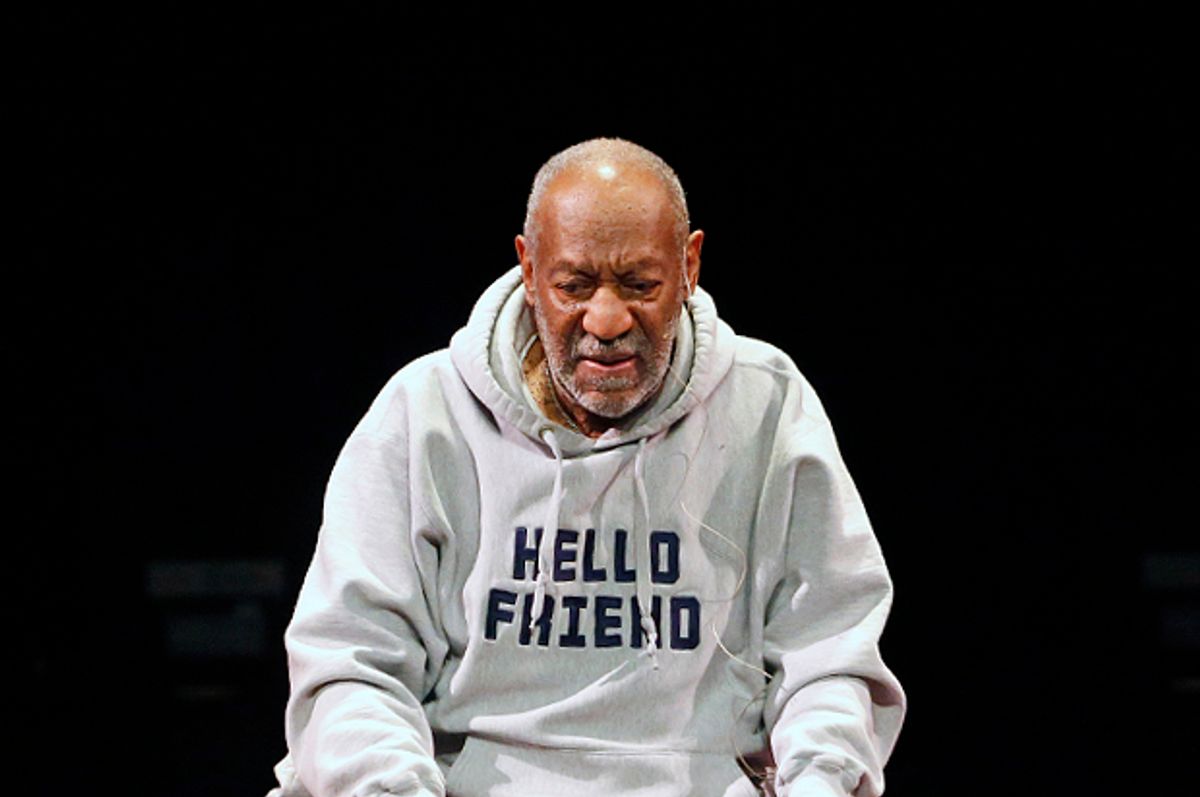 As if to prove that yes, he actually can sink even lower than you'd imagined, on Monday, accused lifelong rapist Bill Cosby filed a defamation suit against seven of the more than four dozen women who have come forward to say that he sexually assaulted them. I'll say this — the man's got chutzpah.

It's now been fourteen months since comedian Hannibal Buress' game-changing Philadelphia set in which he said, "You rape women, Bill Cosby," and audiences — after decades of ignoring persistent rumors and one high profile settlement — began to listen. What has followed has been a deluge of accusations, spanning decades, stories that have followed a strikingly similar pattern. In July, New York magazine put 35 of Cosby's accusers on its cover to tell their sides of the story.

As we've learned time and time again, when a person comes forward to say with a claim of sexual assault against a powerful, successful man — whether it's R. Kelly or James Deen — blaming and shaming often falls swiftly on the alleged victim, while the consequences for the accused tend to be minimal. But something happened this time with Cosby, somewhere around when the tenth or twentieth woman with the same story turned up. Things started going badly for the once untouchable comedy icon. Reruns of "The Cosby Show" and "Cosby" were pulled from syndication. Colleges began to rescind his honorary degrees in droves — the latest was Boston University, just this week. Events have been canceled, "falling like dominoes." The negative publicity even led Cosby to resign from the board of his beloved alma mater, Temple University. And one accuser, Judy Huth, has moved forward with a lawsuit, stemming from an incident she saws happened in 1974.

Yet perhaps worst of all for Cosby, the man's precious "legacy" has been permanently tarnished. Even to his most steadfast and tenaciously loyal fans, he will now forever be known by what he's been accused of. As Joan Tarshis, who told New York magazine she'd been raped by Cosby in 1969, puts it, "When you hear O. J. Simpson’s name, you don’t think, 'Oh, great football player.' That doesn’t come to mind first. I’m thinking it’s not going to be, 'Oh, great comedian.' It’s going to be, 'Oh, serial rapist.'"

For the better part of the past year, Cosby and his team have been relatively quiet, attempting, apparently, to keep up some facade of normalcy. His art collection went on exhibition at the Smithsonian. He has continued to tour at the places that will have him, and even crack jokes to audience members about being "careful about drinking around me."

But lately there have been rumbles of a more aggressive tactic. Over the summer, Cosby's attorney Monique Pressley hit back, telling the New York Times, "I don’t understand why that’s news. A man having an affair or two or 20, even extramarital affairs, to me is not a news item. It’s history," and insisting to "Good Morning America" that "the sheer volume, or number of people, who are saying a particular thing does not make it true." And now, Team Cosby has gone full on, with a defamation suit against Tamara Green, Therese Serignese, Linda Traitz, Louisa Moritz, Barbara Bowman, Joan Tarshis and Angela Leslie — the women who were part of a defamation suit against Cosby in Massachusetts that USA Today calls "the largest of the half dozen civil lawsuits filed against Cosby in recent months."

In court documents, Cosby's attorneys say that "malicious, opportunistic, and false and defamatory accusations of sexual misconduct" have led to a loss of career opportunities and "mortification." He is seeking unnamed damages and public retractions. The women's attorney, Joseph Cammarata, meanwhile said Monday that he "expects that [his clients'] good name and reputation will be restored," adding, "If anyone is surprised by Cosby's actions today, they shouldn't be. He's taken a page out of the defense attorney's playbook in an effort to shift the focus of this legitimate inquiry. It is curious that he has filed a claim only against these seven women, when there are scores of other women who have made similar allegations of sexual abuse and assault against Mr. Cosby." And speaking to the AP, he said the suit "stinks of retaliation," and that "To suggest that these ladies — each and every one of them — got together and orchestrated a campaign against Mr. Cosby is hard to fathom."

The 78-year-old entertainer has built an empire for himself over the years, and if he never earns another dime he'll still be able to live out his days in comfort. The suit, coming now, seems a conspicuous attempt not to make money but to hobble the women who say he assaulted them, and perhaps make others think twice about coming forward. But what it won't do, even in his most blue sky imagining of the outcome, is buy him back his reputation. His latest move, against a string of women who say they have been the victims of sexual assault, just makes him seem as petty and cruel as his accusers claim he is. And whatever happens, for the rest of his life, he's already lost.