How John McWhorter found himself defending Scalia on affirmative action: "Frankly, I think even a stopped clock is right twice a day"

"I can’t help it if Scalia was the one who pointed out the study," he says of the research 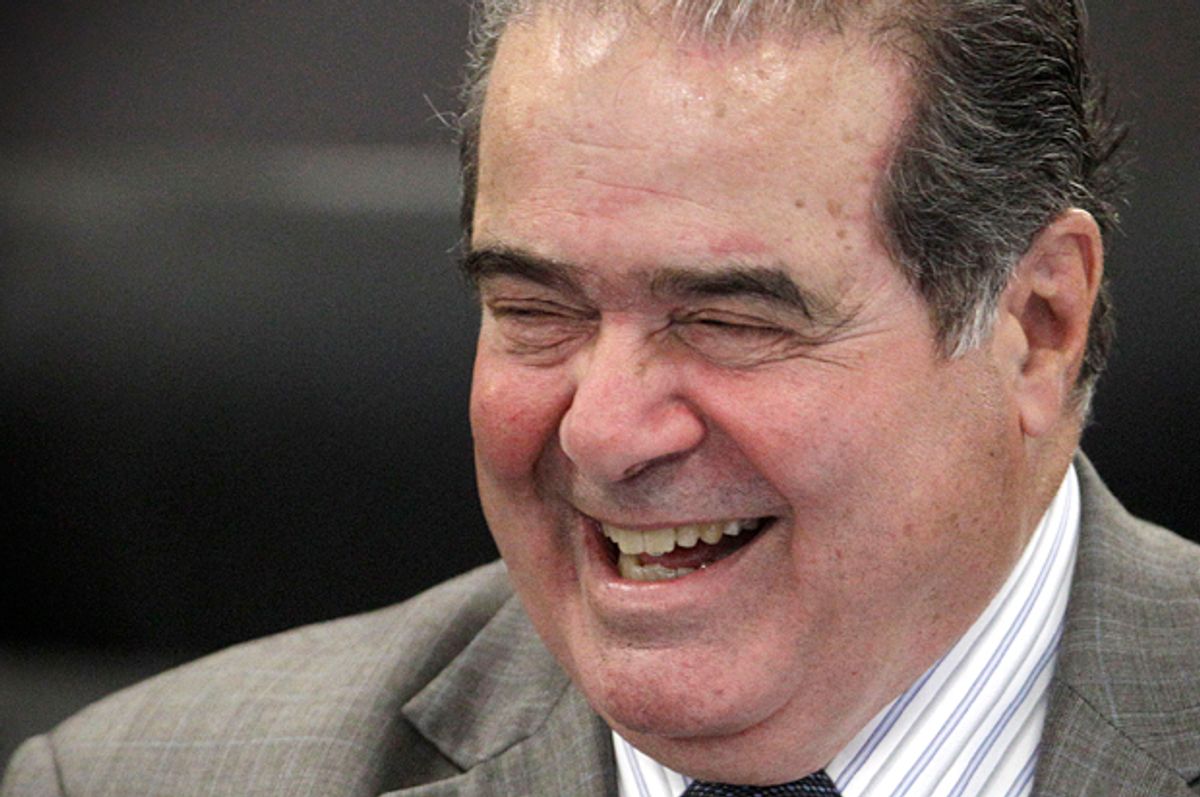 Antonin Scalia is notorious among liberals and lefties for his reactionary statements. Last week, the Supreme Court justice spoke against university-based affirmative action, saying that black students were being moved ahead too quickly and that many of them would be better off at “less advanced schools.” He was quickly denounced as a racist.

One listener who heard something reasonable in Scalia’s argument was John McWhorter, the Columbia University professor of linguistics. McWhorter, for what it’s worth, is both a liberal (of a mostly centrist cast) and a black man. “I don't usually agree with Justice Scalia's perspectives,” he wrote in an opinion piece for CNN.com, “but we are doing him wrong on this one. Scalia didn't express himself as gracefully as he could have. No one could suppose that anything like all black students find the pedagogical pace at top-level universities overwhelming.

“However, Scalia's comment stemmed not from random intuition but from research showing that a substantial number of black students would do better -- and be happier -- at schools less selective than the ones they are often admitted to via racial preferences.”

We spoke to McWhorter about the issue, and his strange agreement with someone who rarely concurs with, from his office at Columbia. The interview has been lightly edited for clarity.

Were you surprised to find yourself on the same side of an argument as Justice Scalia?

Yes. I’m not a Republican. I am rarely a fan of his opinions. And for some people, the proper take on this issue is: Hate Scalia, and that settles the whole thing. If that’s how a person feels, then nothing I have to say on this will be relevant, and the whole thing shuts down right there. But frankly, I think even a stopped clock is right twice a day.

On this one, Scalia made the mistake of assuming the basis from which he was speaking from. It’s something all people do – you forget that other people are not in your head. And he didn’t express himself gracefully – he spoke as if he were talking about the entire black race.

You wrote that he didn’t express himself as elegantly as he could. How could he have been more clear?

What he was referring to was the fact that some black students have been mismatched to schools where the teaching is going to be faster than what they are used to. There have been studies – and none of them that I’m aware of have been done by right-wing zealots. They’re often done by people who don’t expect the results that show that if students like that had gone to schools closer to what they were used to, they would – this is important – they would do better. They would graduate, they would be more likely to major in science, they would be more likely to complete law school and pass the bar.

So I think some people are automatically assume that this is simply about whether someone is mismatched to their school. And then we get detoured into all of these arguments about justice and redressing the past. That stuff is very complicated.

My interest in this is very simple: The study suggests that students who are not mismatched do better. That’s something all of us should want. And I can’t help it if Scalia was the one who pointed out the study.

Back to Scalia’s lack of what you call graceful expression. “Grace” is rarely part of his delivery; he has a distinctive way of getting his ideas across. How would you describe his style of speaking and writing?

Scalia is a punchy, aggressive arguer, which is a great thing for a debate team. If he were on the left, people on the left would admire for his argumentative style. He reminds me of Barney Frank in that way: He has a way of tossing crazy colloquialisms in that make him seem even more dismissive of an argument than he is. One time he called an argument “argle bargle.”

But last week, it sounded to me like he was kind of meandering around to making a point he remembers from the think-tank circuit, that he remembers from when it was covered in the media about 10 years ago… when affirmative action was debated more by what’s called the chattering classes.

So it was a major flub, ripe for misinterpretation. But when you come down to it, he was saying something valuable about benefitting black students. And to dogpile on it simply because Scalia offends you in other ways makes me wonder: Are we pretending to be in the movie “Mean Girls?” Or are we trying to help people? And I just want to point out, these studies show how we can help black students.

So what’s the danger to black students who enroll at schools that are not appropriate?

Well, the main problem seems to be with the sciences, and with law. As I say in the piece, the data is ambiguous about undergraduate school. But if you are being taught the sciences at the speed of students who’ve had good schools, the book-lined home, the college-educated parents, then often what happens is you choose not to major in the sciences, and do something else. (We don’t need to put down the something else.) But to create more black scientists is a good thing. It’s also true for the law and creating more black lawyers.

When people talk about this, they tend to see it as Yale, or jail. If a person is not going to Yale, most people think they’re going to community college. There’s an awful lot in between. If you look at somebody who in 1993 would have gone to UC Berkeley, but in 1999 goes to UC San Diego, and does much better than they would have, it’s impossible for me to say we shouldn’t talk about that. Or that we should ignore it when Antonin Scalia brings it up.

These are very important findings.

Has your thinking on this changed over time?

No, this is pretty permanent. My feeling about affirmative action is that is that basing it on race made sense in about 1970. It should have continued for about a generation. But racial preferences are always controversial – you don’t keep them going forever. Right now, affirmative action is wonderful, but it should be done on the basis of socio-economics.

People can have perfectly wonderful lives going to schools that are not [the Ivy Leagues.]

My view on this I consider to be perfectly liberal. In 1998 I did not realize, when saying that [economic] disadvantage is what preferences should be based on, that it would be assumed that I was a Republican, anti-abortion partisan who wished the civil-rights movement hadn’t happened. Not at all. I see this as a liberal Democrat position.

What kind of response have you gotten from the piece?

Mostly positive, and not just from Republicans. A few naysayers, most of whom I get the feeling are not reading what I wrote. But actually more positive than I expect. Mostly because I’m not saying anything all that counter-intuitive.

These studies – such as the Duke study, or Richard Sanders’s work – tends to get downplayed or dismissed because it doesn’t make the right music. But those studies are explaining how we can do better for our children. It’s not saying that they should not have educations, it’s not calling for re-segregation or a return to the past. It just says there are better ways to be doing things than we’ve been doing them.