"It's up to us": Paris was in a celebratory mood at the end of the climate summit, but activists know it's not a time to rest 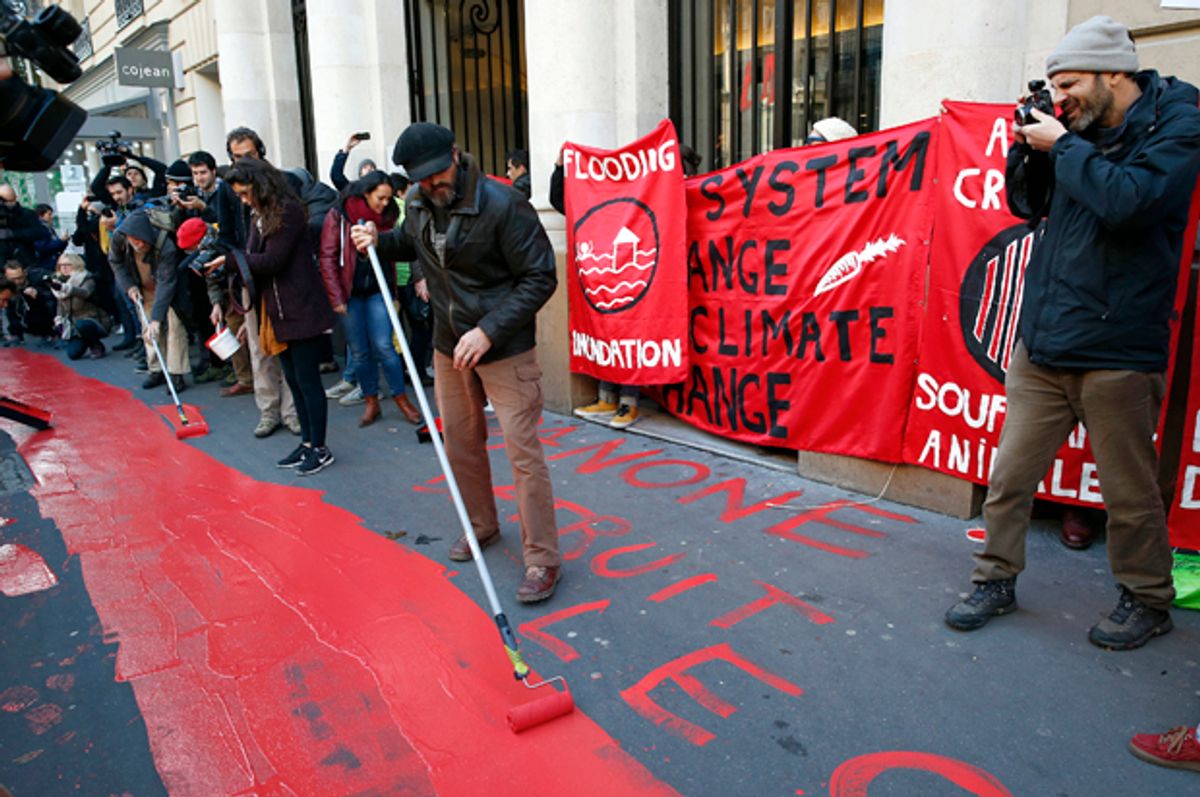 Delegates at the Paris climate summit were still hashing out the last details of a landmark global agreement when thousands of red-clad activists gathered in view of the Arc de Triomphe Saturday to say that a livable planet is a red line they are prepared to defend. Protesters ranged in age and nationality, but they agreed that the specific outcome of the summit was less important than having a global, grass-roots movement strong enough to pressure governments and corporations to make the massive changes necessary. “It’s Up to Us,” said one sign.

By the end of the day, an agreement was signed that turned out to be stronger than many had expected, aspiring to keep global average temperature rise to 1.5° Celsius above preindustrial temperatures. Since the world has already seen increased drought, hurricanes and rising sea levels at less than 1° of warming, island nations and those most vulnerable to extreme weather have said that allowing temperatures to rise even to the old goal of 2° would mean a death sentence for them. Although the agreement sets up a procedure for countries to increase their ambitions every five years, critics point out that countries set their own goals for carbon reductions, and the amounts pledged so far would lead to a catastrophic 3° of warming, or more.

That’s why activist organizations announced before the summit even ended that to increase pressure to keep fossil fuels in the ground they would conduct civil disobedience around the world during the week of May 7-13, 2016. During Saturday’s protest, which featured red cloth lines rolled across the cobblestone street, Plowshares campaigner Angie Zelter said that civil disobedience didn’t need to wait until May. “As soon as we get home, we have to start,” she said. “We can’t just do things a few times a year.” She loved the symbol of the red lines and was already imagining putting red lines around the office of her local member of parliament in her Welsh town of 300.

This sense of urgency was widespread, despite the playful atmosphere along the Avenue de la Grande Armée, with protesters dressed as angels, polar bears and at least one Santa. Some wore red rain ponchos on the damp morning, others red umbrellas or hats. Many sported tulips. Among those singing and chanting were grandparents, students and a group of cyclists who had peddled from as far as London, Holland and, reportedly, Vietnam.

Gary Cranston, an Irishman who works as a union organizer in New Zealand, had been inside the climate summit with the International Trade Union Confederation, which he said represented 180 million workers worldwide. The climate justice spokesperson for a union of fast food workers, Cranston was enthused about the role labor unions could play in the climate movement. “Unions have a different approach to challenging power than NGOs and environmental groups do. Unions are democratic organizations that push on power themselves directly, and that’s an important thing.”

When asked about the call for civil disobedience, he responded, “When the draft text [of the agreement] came out, we called for that already. I’m already connected with a group of people at home who are taking to the water today in New Zealand to do direct action training in kayaks to stop deep sea oil drilling.”

In preparation for Saturday’s protest, the global organization 350.org had trained 4,000 people to do civil disobedience, but those plans were amended after the Nov. 13 terrorist attacks in Paris and a subsequent French government ban. Instead of a giant march in Paris on Nov. 29 to kick off the two-week summit, known as COP21, activists conducted a more symbolic protest in Paris and shifted emphasis to marches around the world, which they say included more than 785,000 people.

Despite the ban, the climate movement expressed its creativity and urgency throughout the summit in smaller protests within the suburban complex where the negotiations were happening, as well as in downtown Paris. On Monday, Dec. 7, indigenous people from around the world kayaked down the Seine to call on governments to include indigenous rights, which along with human rights were recognized in the final agreement’s preamble, but not in its main text. On Friday Greenpeace activists scaled the Arc de Triomphe and poured washable yellow dye around its traffic circle and spokes, making it look like a giant sun from aerial view. Some were arrested in that action.

In the end, the French government relented, allowing Saturday’s midday, red-lines protest to mark the summit’s end. French police were out in force, helmets hanging off their thick black vests, though they seemed relaxed through most of the morning. When protesters stayed in the street longer than scheduled, police swept the street, a row of police advancing with police vans creeping behind them. Activists slowly retreated, many of them heading over to the Eiffel Tower for another protest organized by Friends of the Earth, who earlier that day had mobilized 3,000 volunteers to spell out the words “Climate, Justice, Peace” on a map through green geolocation tagging marks.

Justice and peace were important themes among the protesters and in the climate negotiations themselves. One of the great justice questions was whether developed countries would commit money to help developing countries reduce their emissions. After much wrangling, the agreement included a provision for at least $100 billion a year for such efforts after 2020, though countries are not legally bound to contribute, another reason activists say that a just and speedy energy transition will not happen without the movement’s continued pressure.

In the streets of Paris and in press releases afterward, activist groups vowed to keep up that pressure. A member of a workers syndicate that spanned Belgium, France and Tunisia said that they were planning civil disobedience in Tunisia in May. “They always say,‘This year. This year. This year,’” explained Christian Margris, who is originally from Mexico. “We only have one planet. It’s going to be too late.”

“Now it’s up to us to close the gap between rhetoric and reality,” said the 350.org website. “We’re ready.”