Shocker, Rand Paul's actually good for something! Love him or hate him, he shows how incoherent and ridiculous the Republicans are

Paul may be wrong about a lot of things, but his presence in the campaign exposes the vacuousness of today's GOP 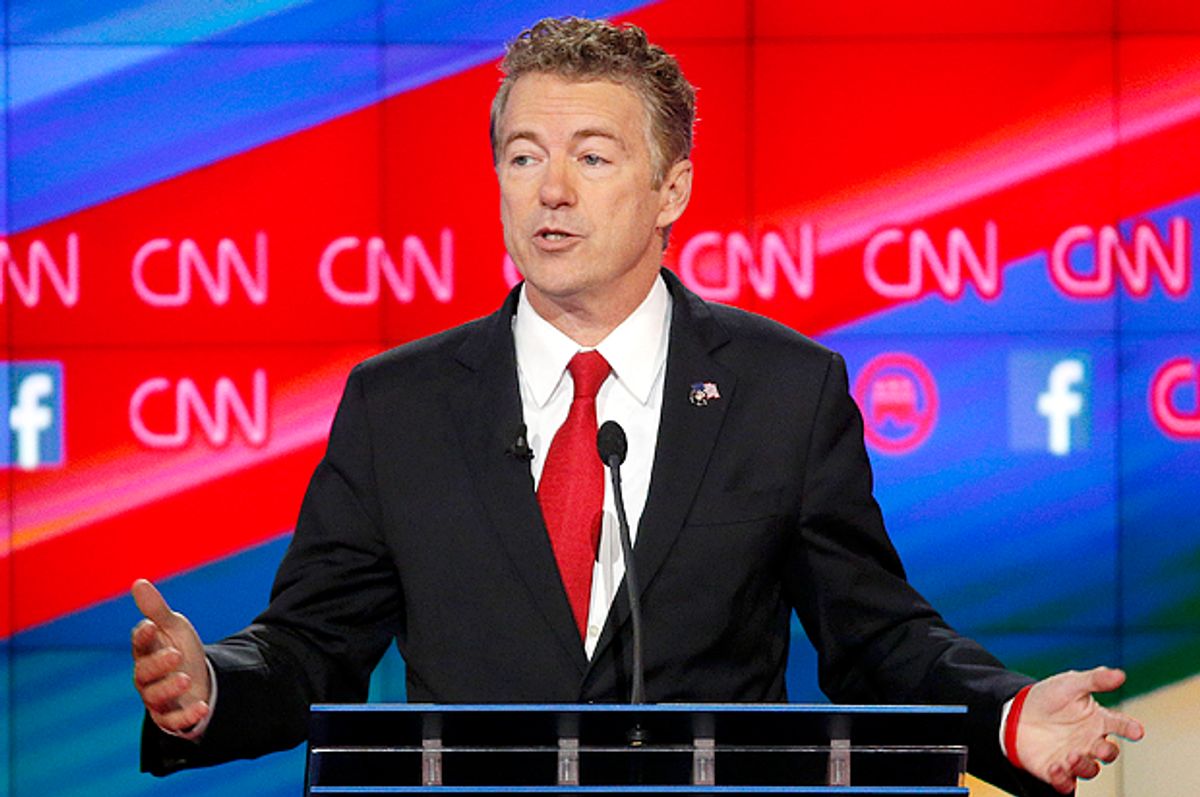 Rand Paul deserves a round of applause.

The Kentucky senator may be wrong about a lot of things, but he’s consistent and he has an actual governing philosophy. More importantly, his presence in the Republican race has clarified just how vacuous and unprincipled the other candidates are.

Whether you agree with him or not, Paul makes arguments on the basis of firmly held principles. At the very least, there’s an internal logic to his worldview, and that allows for a substantive debate with those who disagree, which is about the best we can hope for in a presidential campaign.

Paul’s consistency was evident in last night’s Republican debate, as it was in previous debates. Indeed, his opening statement pointed out how disconnected everyone else on that stage is:

“The question is, how do we keep America safe from terrorism? Trump says we ought to close that Internet thing. The question really is, what does he mean by that? Like they do in North Korea? Like they do in China? Rubio says we should collect all Americans' records all of the time. The Constitution says otherwise. I think they're both wrong. I think we defeat terrorism by showing them that we do not fear them. I think if we ban certain religions, if we censor the Internet, I think that at that point the terrorists will have won. Regime change hasn't won. Toppling secular dictators in the Middle East has only led to chaos and the rise of radical Islam. I think if we want to defeat terrorism, I think if we truly are sincere about defeating terrorism, we need to quit arming the allies of ISIS. If we want to defeat terrorism, the boots on the ground -- the boots on the ground need to be Arab boots on the ground. As commander-in-chief, I will do whatever it takes to defend America. But in defending America, we cannot lose what America stands for. Today is the Bill of Rights' anniversary. I hope we will remember that and cherish that in the fight on terrorism.”

There’s nothing heroic about Paul’s proclamation, but it’s honest and grounded in recent history. Almost every other candidate on that stage is too cowardly to admit this, however. The Republican Party has become pathologically militaristic, and Paul is the only person willing to push back, who will concede that the last fifteen years actually happened.

Throughout the debate, Paul was the lone voice of reason. When Rubio, a small government conservative, called for more troops and more spending, Paul noted his fiscal hypocrisy. When practically every other candidate endorsed arming the “moderates” in Syria, he made the obvious point: “I think that by arming the allies of ISIS, the Islamic rebels against Assad, that we created a safe space or made the space bigger for ISIS to grow. I think those who have wanted regime change have made a mistake. When we toppled Gadhafi in Libya, I think that was a mistake. I think ISIS grew stronger, we had a failed state, and we were more at risk.” When Christie blustered about no-fly zones and shooting down Russian planes, Paul pounced: “Well, I think if you’re in favor of World War III, you have your candidate….My goodness, what we want in a leader is someone with judgment, not someone who is so reckless as to stand on the stage and say, ‘Yes, I’m jumping up and down; I’m going to shoot down Russian planes.’’

This is the role Paul has played for the duration of this campaign. He's the only person who dares to poke holes in the phantasms peddled by his fellow candidates. In a party of blinkered non-leaders, Paul has continually said what he thought was true, regardless of the room.

He deserves credit for that.

Unfortunately, Paul has virtually no chance of winning the Republican nomination. To win, Paul had to energize the libertarian wing of the party, and he’s failed to do that. Part of the problem is that candidates like Trump and Cruz have emerged as the preferred “outsider” candidates, leaving little space for Paul.

But Paul’s bigger problem is his tendency to tell the truth; conservative voters aren’t interested in that. They want red meat, empty platitudes, and false promises. Trump and Cruz are counterfeit conservatives; they’ll shape-shift and say whatever they think their audience wants to hear. Paul is serious, however, even if you disagree with him. He has governing principles, and his rhetoric is constrained by reality; this is something of a sin in Republican circles.

Whether it’s defense spending or reckless interventionism or the NSA’s unconstitutional surveillance program, Paul is the only one willing to take an unpopular – but necessary – stand. And he does so on the basis of libertarian and conservative principles. That he stands alone on these issues is a reminder that his Republicans colleagues aren’t conservative at all – they’re incoherent or worse. That Republican voters refuse to take him seriously when he defends conservative principles also shows how disjointed their views are.

Hillary Clinton or Bernie Sanders would make a far better president than Rand Paul. However, a general election campaign with Paul at the top of the Republican ticket would be a good thing for the country. We’d have a real debate. With Sanders in particular, there would be a crystal clear contrast, and a genuine collision of ideas.

That won’t happen with Trump or Cruz or Carson or Rubio or Bush because they’re conservatives in name only. Unlike Paul, they won’t even acknowledge the failures of the previous Republican administration, and so there’s no real conversation to be had about what went wrong or how to fix it. Instead, they muddy the waters with misinformation and a version of history that begins the day Obama was inaugurated.

Paul, to his credit, has the courage of his convictions, and will engage in a serious debate. That sets him apart in today’s GOP.