“Harry Potter” and the quarter-life crisis: “The Magicians” conjures the dark side of an enchanted education 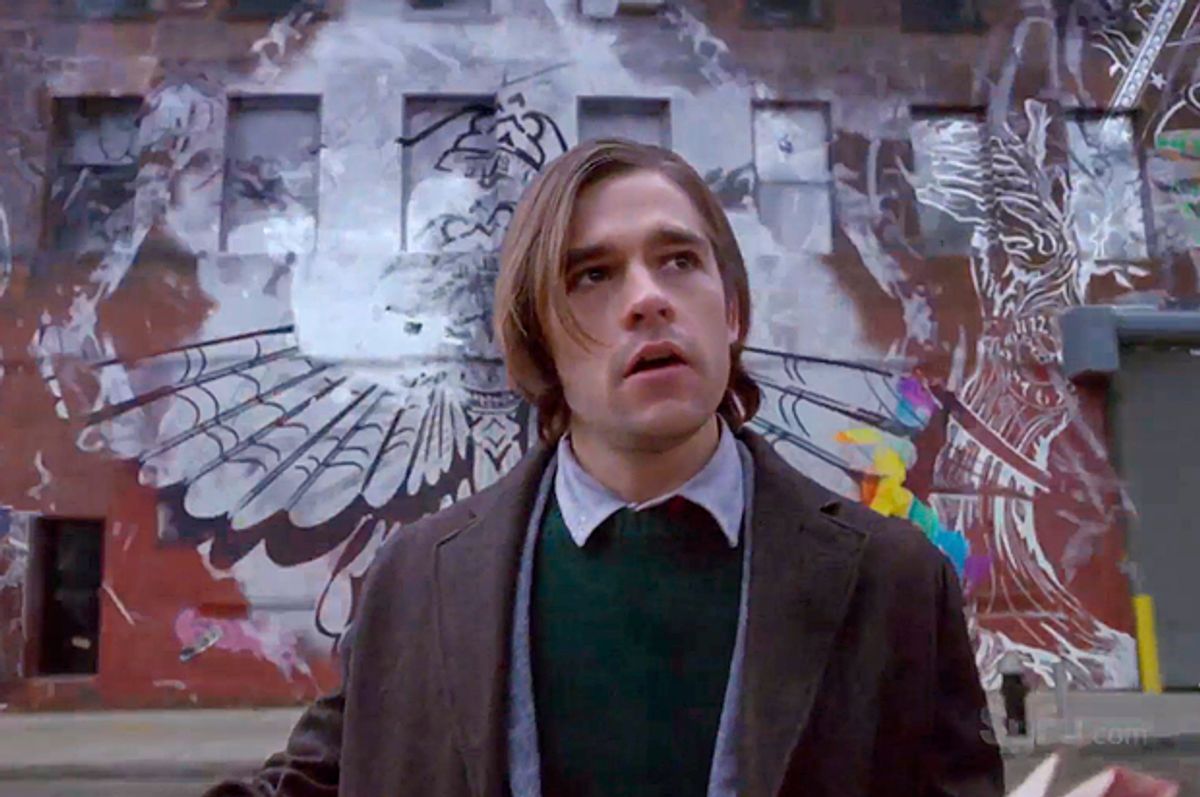 The smartest thing Syfy’s “The Magicians” does, right from the start, is putting protagonist Quentin Coldwater (Jason Ralph) in a psych ward. That’s not canonical—it’s not part of the character’s backstory in Lev Grossman’s “The Magicians,” which was eventually followed by two more books to complete a trilogy. In the books, Quentin is an amateur card-trick player who discovers magic, like the magic in his beloved childhood fantasy books, is real; but unlike the “Harry Potter” series, which uses a similar template, Quentin’s experience with Brakebills University is not quite so whimsical and heroic. That’s because Quentin isn’t your average protagonist. The term “anti-hero” isn’t quite right. It’s not that Quentin is struggling with being a bad guy; it’s that Quentin is struggling with being an annoying, self-absorbed dickhead. “The Magicians” presents itself, at first, as a story about a magical university and an evil villain. But what it really is, in Grossman’s hands, is a story about the personal journey of one nerdy, disaffected man who invested a lot into worlds that aren’t our own—and how being talented and imaginative can create for a specific kind of longing unhappiness that preys on the soul.

There are problems with Syfy’s pilot of “The Magicians,” which premiered its pilot in a sneak peek last night ahead of its official debut in January. But the essential truth of the story—about Quentin’s battle with the worst parts of himself—is largely intact. “The Magicians” is brilliant less for the quality of its fantasy storytelling and more because it engages with magic in a world where the myth of magic is alive and well. Quentin Coldwater grew up reading the Narnia and Harry Potter books. He knows from Mordor and the Shire; he’s played Dungeons and Dragons. So when he discovers that aspects of what he has loved—and escaped in for so long—is real, his journey in “The Magicians” starts with an uncomfortable premise: What if it’s not a great idea to check out of the real world, for the warm embrace of fantasy and fiction? Is it really ever as easy as it sounds like it could be in the books?

In the Syfy series, Quentin Coldwater is an awkward college senior who never quite fit into the social scene—partly because he thinks it’s beneath him. He’s pretentiously grating, even at parties, in order to mask his own insecurities; the only time he seems completely at ease is when he’s reading a book from his favorite childhood series, the Fillory series (which is, essentially, the show’s Narnia). “The Magicians”’ pilot goes so far as to build the world of Fillory, even from the first few minutes—creating a world so vividly colored and detailed that it is hyper-real, even more real than his New York City college campus. This is a bit of a tell; Fillory’s landscape becomes more and more real, even in just the first episode, as Quentin goes to an interview and finds himself on the campus of a university he’s never heard of before, both in a different place and a different season than the New York he left behind. He’s pushed into doing a test that is adapting to his skill set as he writes in it, changing words on the page as he stares at it. And then when he’s asked to do a magic trick, Quentin is astonished to discover that beyond just sleight-of-hand, he appears to have the ability to make the impossible possible—making a cloud of playing cards swirl around him in a vortex, before collapsing into a dead faint, from exhaustion or terror, hard to say which. That’s the beginning; Quentin is admitted to Brakebills, which is itself a confusing, less cozy version of Hogwarts, and tries to stay afloat as the world gets more and more confusing.

The difficulty is that in just one episode, “The Magicians” tries to create three different worlds simultaneously—Quentin’s New York City, Fillory, and Brakebills, complete with different casts of characters and different sets of rules. It’s not as sloppy as it could be, but it’s hard to not feel rushed through the pilot. Syfy greenlit the series after seeing the pilot, so if it seems like the pilot has to cover a lot of bases in order to prove it’s about a lot of things right from the get-go… that’s because it did. Which is too bad, because the story of “The Magicians” would be well-served with a little bit more time to breathe. The loner’s experience, after all, is characterized more by long stretches of silence than it is by scene after scene of action.

Given industry dynamics, though, it’s a bit too early to judge the show, even on potential. The rapid-fire introduction of all of the characters and major plot drivers doesn’t do any of it real justice—especially the supporting characters who fans will recognize from the book, who make it onto the screen for about 20 seconds of establishing dialogue before being whisked away. Weirdly, it’s the same problem the “Harry Potter” films have, of crossing off the necessary nods to the book even when it’s very inconvenient—leading to supporting character beats that make no sense to anyone who hasn’t read the books.

Indeed, it’s kind of bizarre how many similar issues “The Magicians” and the “Harry Potter” movies have, considering how the former so consciously refers to the latter. Brakebills, like Hogwarts, doesn’t always seem magical enough; the adaptations don’t seem to do any of the characters justice; the horror on the page does not translate to horror on-screen, despite great efforts in that direction. Even the visuals of “The Magicians” are not that impressive, because they are so similar to better (and presumably, more expensive) visuals in the “Harry Potter” and “Lord Of The Rings” films.

And of course, there is that question of casting. I read “The Magicians”’ trilogy, so I have an idea of what the characters should look like—and of course, the show cannot quite anticipate or live up to what’s in my head already. (For the book’s fans: in my extremely subjective opinion, Julia is spot-on the way I imagined her; Quentin is mostly the way I think of him; Alice is wrong wrong wrong; everyone else, I’m not sure yet.) It’s the classic beloved-book adaptation problem of responding to fandom, in the classic television-series bind of trying to create a show that pleases the network, first. This is not an easy needle to thread.

But I am cautiously optimistic. Grossman’s book is more a bildungsroman than a fantasy, despite the title; even in the original books, what happened was less important than how the characters felt about it. And the Syfy series is starting by telling Quentin’s story simultaneously with the protagonist for the second book, “The Magician King”: Julia (Stella Maeve), who unlike her privileged friend Quentin fails the entrance exam to Brakebills but is haunted by the half-remembered vision she has of the school of magic. Julia’s story is a necessary counterweight to Quentin’s, and the show knows that already, which is a good sign. Because what ends up happening with their stories are two opposing narratives of the same problem, which is feeling like you don’t fit in, and like everything around you is terrible, and that the world has been leached of its potential and goodness. Quentin is always hankering after Fillory; Julia, meanwhile, is always hankering after Brakebills. Neither is entirely satisfied with what they discover.

There is something lost in making Brakebills not an undergraduate university, but rather an eclectic graduate program. “The Magicians” author Lev Grossman—who has publicly discussed his depression and his self-identified geekdom, including in an interview here at Salon—identifies something rather resonant in “The Magicians,” and that is the second adolescence of the modern young person, especially in the world of Ivy League institutions and writerly ambitions. Because of the shift, the show starts off with a little more edge than the book gets to—Quentin’s an adult who’s already wasted some of his potential; already, sort of, a man of the world, and not quite as wrapped up in stories of killing monsters and vanquishing demons. But what does feel right is the story’s focus on mental illness, right from the get-go—immediately introducing a counter-narrative to the world of fantasy, one that reminds its characters that not all demons can be killed with a sword.