Here come the Trump truthers: How one man united the right & the left (in refusing to believe he's for real)

People are so desperate for a world where Donald Trump isn't a White House contender, they're resorting to fantasy 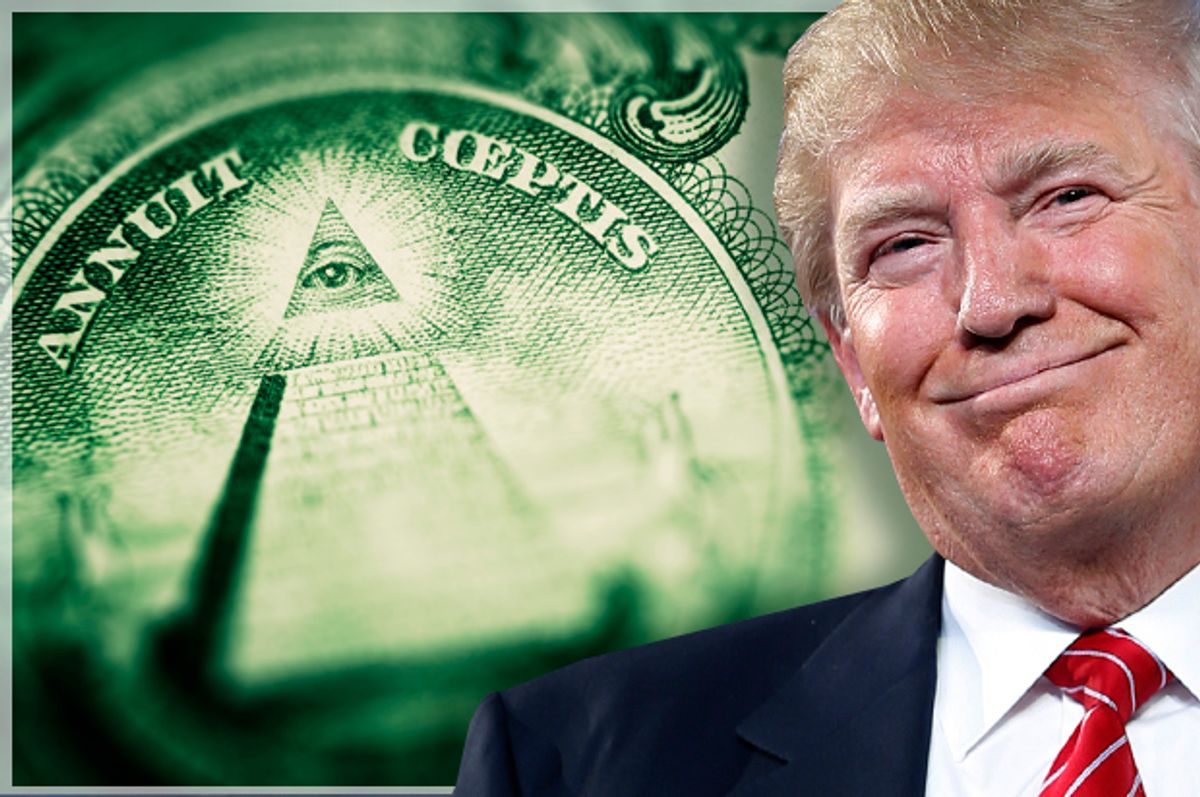 I’m not sure if it’s a particularly American phenomenon, but following shortly behind each national tragedy is usually a conspiracy theory that offers an alternative explanation. The attack on the World Trade Center soon brought the “truthers” who offered a theory of an inside job, a so-called "false flag" operation. The Sandy Hook shooting is said by some to have been staged by “crisis actors” in order to create the political and cultural circumstances for gun control. Kennedy’s assassination famously spawned a whole cottage industry of theory creation. As irrational as the theories may seem, they oftentimes seek to bring a rationality, an arcane order, to the more chaotic truth.

The success of Donald Trump, itself a sort of national tragedy, has too begun to engender alternative theories that seek to explain a reality that otherwise seems inexplicable. And this is not from fringe voices either; esteemed conservative columnist and Fox News regular George Will floated the notion that Trump is a “Democratic mole” back in July, long before the worst of Trump’s nativism and Islamophobia. A sitting congressman, Republican Carlos Curbelo of Florida, echoed Will, offering the possibility that Trump is “a phantom candidate recruited by the left.”

Following those early articulations of the theory, the Washington Post reported in August on a phone call between Trump and Bill Clinton in May, just a month before the billionaire entertainer and mogul announced his candidacy. The Clintons have, for good reasons and not, always attracted suspicion from the right, and the call, called “a casual chat” by Clinton’s office, was all the burgeoning theory needed to become a full-fledged conspiracy theory.

Last week, Jeb Bush brought the theory into prime time, taking to Twitter to wonder if “[m]aybe Donald negotiated a deal with his buddy @HillaryClinton” after Trump tweeted poll numbers suggesting that a significant number of voters would follow him to a third party ticket. “Continuing this path will put her in the White House,” Bush wrote. Trump is an agent of those nefarious, all-powerful Clintons! Hey, maybe masterfully creating a three-year-long Benghazi spectacle was only a ruse to distract the party while their real plan was set into motion.

Liberals have their own theories. MSNBC’s Rachel Maddow has hatched a theory that Trump is trying to “sabotage” his own campaign because he doesn’t actually want the nomination or the presidency. Network colleague Lawrence O’Donnell called the idea “intriguing” when he invited his fellow host onto his show to discuss the idea. O’Donnell, a D.C. veteran, and Maddow, with a Ph.D. in political science, spent more than 10 minutes comparing their versions of such a theory.

It is as though, whether on the right or the left, many of us can’t imagine the possibility of Trump winning, so we develop intricate theories about how and why he’s not a real candidate. He’s a “mole” or a Clinton apparatchik, say otherwise rational folks on the right; or a candidate bent on his own destruction, say Maddow and O’Donnell. It’s as though the truth can’t actually be happening. Trump can’t be real. Jet fuel can’t melt steel beams! The grassy knoll!

But here's the thing: Even if Trump somehow were an electoral suicide bomber, and his top-secret, clandestine mission — known only to him (and perhaps the Clintons) — were spectacularly revealed on the convention floor in Cleveland next July, the problem of Trumpism would still remain. The theories seek to eliminate Trump from our politics, but his supporters are the confounding factor in all of this, waiting in the wings for anyone else who can deliver nativist xenophobia and Islamophobia with hyper-confident bluster. Unless you come with millions of conspiracy theories to explain each supporter, a single theory for the campaign, explaining only Trump himself, is moot.

Trump isn’t even the ideal vehicle for his politics. A better-looking, not-so-Yankee candidate with normal hair would likely be more attractive to voters. Trump’s off-the-charts narcissism and independent wealth are particular advantages, but inflated self-worth isn’t hard to find in America and Trump has spent comparatively very little on his campaign. Freed from having to court wealthy donors, Trump is able to say whatever he wants, but as his campaign has gained cruising altitude the billionaire has had to put only a pittance into Donald J. Trump For President--just $100,000 in the third quarter. Unsolicited donations of nearly $4 million grease the gears, and the free publicity, in the form of news coverage offered to a candidate willing to say what Trump says, obviates the need for the television ad buys that drain other candidates’ war chests. The right candidate with much more modest wealth might be able to replicate Trump’s shoestring campaign.

If Trump leaves the campaign it won’t be because it was all an elaborate ruse. And the millions of citizens on which his unlikely success relies aren’t going anywhere. They’ll be right there waiting to be galvanized by the next candidate willing to animate their fear and easy patriotism. You can’t conspiracy theorize that reality away.