The GOP is almost entirely post-truth at this point, and if you call them out, you're part of the liberal media 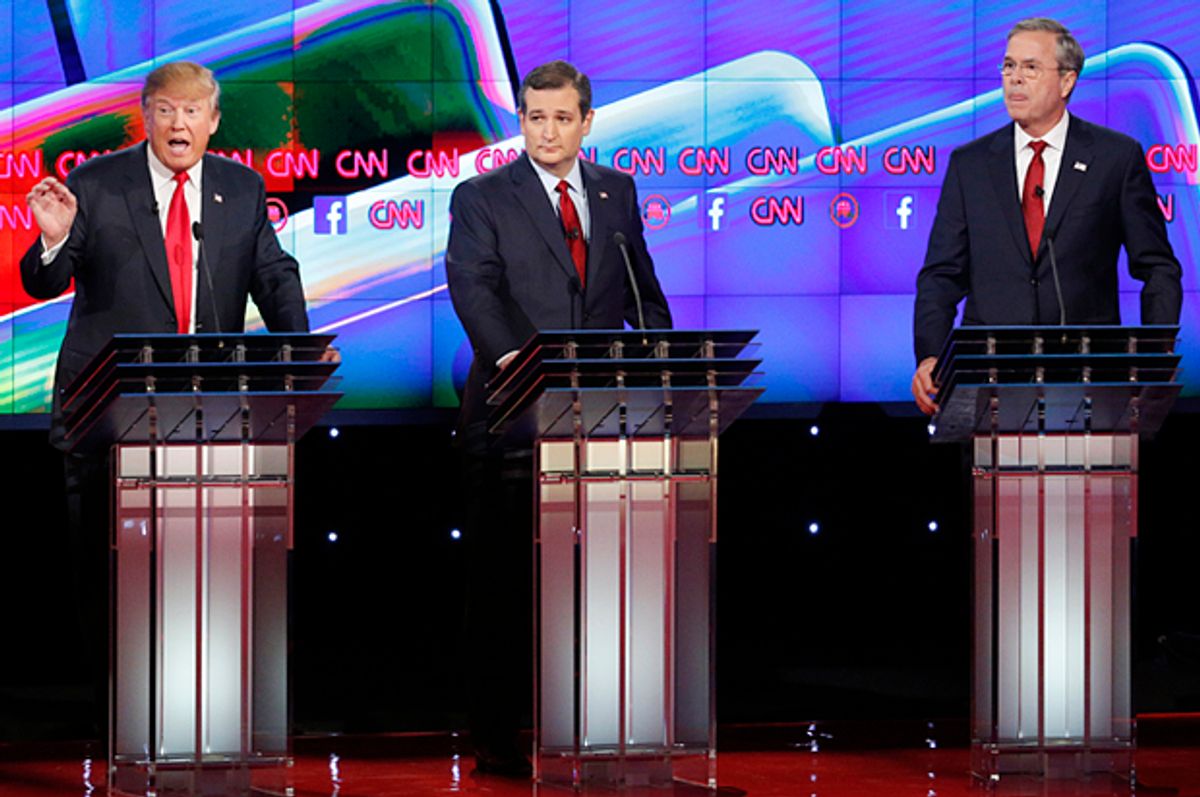 Another GOP debate, another steaming pile of half-truths, lies and pseudo-facts. The Republican Party seems to be almost entirely post-truth at this point, and if you call them out, you're the liberal media! It's a brilliant racket and one that led us to the current state of affairs where facts aren't just dispensable, but a political liability. Without further ado, here are the top lies and distortions from tonight's debate.

A popular refrain in the wake of the Paris and San Bernadino attacks is that the U.S. government (or more specifically President Obama) cannot properly vet Syrian refugees. This has been repeatedly debunked as hysterical posturing, yet remains a popular trope among the far right. In addition to a rather thorough takedown by John Oliver two weeks ago, PoliticoFact rated this claim, "Mostly False" in its detailed analysis this evening.

This is an old canard, and one that even nominally lefty outlets like Vox like to push, but it has little to do with reality. In an effort to shore up his neocon credentials, Rubio has doubled down on regime change in Syria while other GOP candidates like Paul and Cruz - as well as Bernie Sanders - have run away from this position. To do this Rubio has pushed the conspiracy theory that the reason ISIS grew in Syria is because the U.S. didn't back the rebels opposed to Assad when in fact the CIA, according to documents revealed by Edward Snowden, spent $1 billion a year arming, funding and assisting the opposition.

A popular trope among the nativist wing of the Republican Party (aka the Republican Party), the bogus stat that 25% of Muslins support violence is thrown around quite often. But it originates from noted Islamophobic "think tank" Center for Security Policy. As the New York Times notes:

Mr. Trump vouched for the group at a rally on Monday night. But the poll — conducted by the Polling Company, a Republican firm — is in no way truly representative of all Muslim Americans because of its methodology. The poll was not based on a random sample, but included only people who chose to participate, and therefore is not representative of the population being studied. In addition, some of the questions were leading and biased.

Why does Christie keep repeating this lie? It's been debunked several times and it's a matter of public record. It's a great soundbite to be sure, and if true, would put Christie in the heart of the most significant foreign policy crisis of the past 20 years. But the reality is that George W. Bush nominated Christie on Dec. 7, 2001, as one can clearly see from a White House press release.

Geroge W. Bush deported 1.8 million people. Obama deported 2 million. It's unclear where Cruz is getting this number from.

This is another assertion that's completely disproven and easily searchable online (which raises the question of why CNN hasn't bothered doing this). Trump has received, according to the last available FEC filings, upward of $3.9 million from individual donors compared to using only $101,000 of his own money. How does this fit with his "self-funded" narrative? It's unclear, but perhaps a more urgent question is why would any sane person donate money to someone who claims to have over $10 billion?

That's not true. A recent Gallup poll shows terrorism fears have spiked recently, but are the same as in 2005 and nowhere near as high as after 9/11.

8. Lie by omission: Why was the attack on Planned Parenthood not mentioned in a debate about terrorism?

As Sean McElwee of Demos noted, in a debate that was nominally about "terrorism," non-Muslim terrorism was completely absent. The recent Planned Parenthood terrorist attack carried out by a man who claims to be a "warrior for babies" wasn't discussed in the broader context of terrorism. Why this is so remains unclear.

9. Lie by cliche: What the hell is Fiorina talking about?

Fiorina keeps referencing "building up the sixth fleet" because presumably it sounds like some important walk-and-talk dialogue in the West Wing, but it actually makes no sense. Several experts have chimed in on this strange refrain and pointed out that it's basically nonsense. As military magazine Stars and Stripes noted:

Her meaning wasn’t immediately clear — the U.S. 6th Fleet is less a collection of ships than a command structure for operating American warships in the Atlantic and Mediterranean. Moreover, the fleet is one of the few growing military commands in Europe. It is building land-based missile interceptor sites in Romania and Poland, and in the coming days it will welcome the last of four guided-missile destroyers to arrive for permanent stationing in Rota, Spain.

As the LA Times notes, it's not "giving" $150 billion to Iran, it's relieving sanctions that will ultimately unfreeze more than $150 billion in assets to Iran, but the funds were already Iran's to begin with. No one is "giving" Iran anything.