Ben Carson blasted North Korea for spending more on the military than the hungry. Has he looked at his own country?

News for Ben Carson: When it comes to prioritizing the military above all else, no one comes close to the U.S. 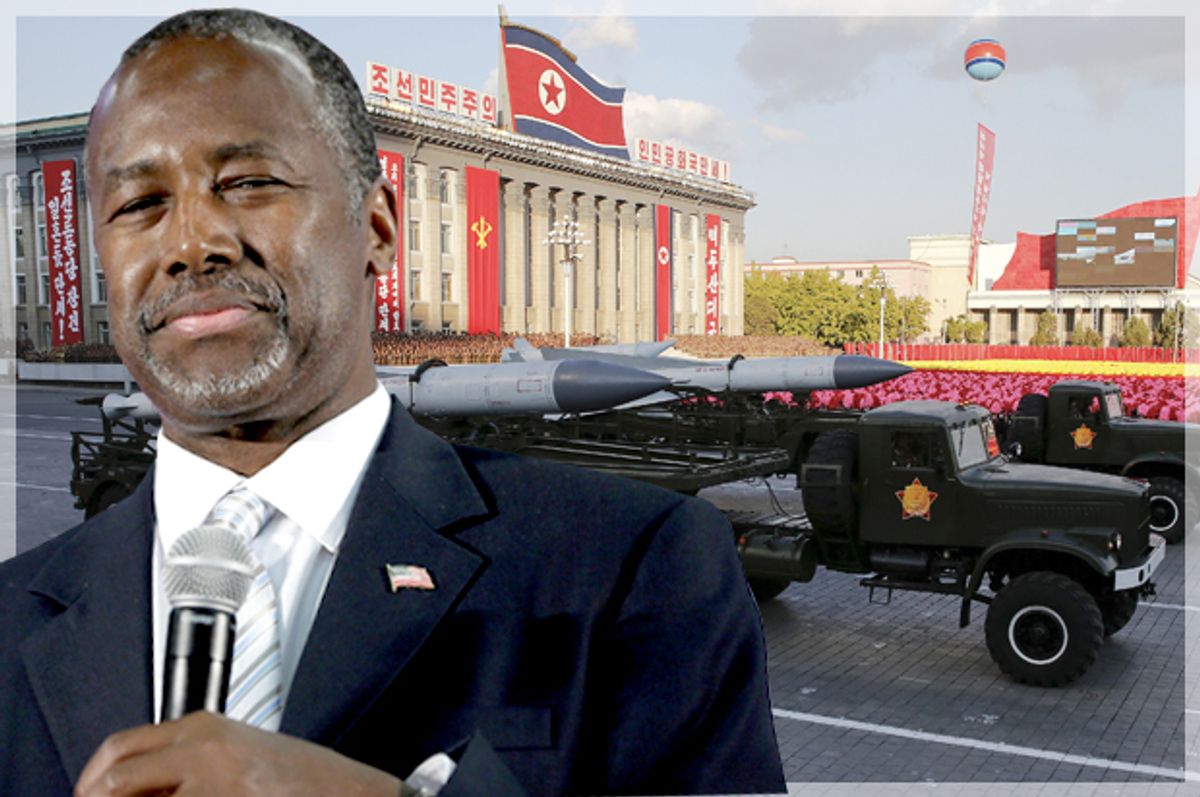 Here's a quiz. Which country was Ben Carson talking about in the Dec. 15 presidential debate?

"[Country] is in severe financial straits, and they have decided to use their resources to build their military, rather than to feed their people and to take care of the various humanitarian responsibilities that they have."

If you said North Korea, you would be right. The U.S., however, would have been just as good a guess.

Because, when it comes to prioritizing military spending above all else, one country takes the cake. The United States of America has no competition in the realm of military spending; no other country even comes close.

More than half of the U.S. federal government's discretionary budget goes to the military. The independent nonprofit organization the National Priorities Project monitors where tax dollars are spent: If you take the entire planet's military expenditure and add it together, the U.S. alone spends 37 percent. That is to say, the United States, which has just one-twentieth of the world's people, is responsible for more than one-third of the world's military spending.

The U.S. blows more tax dollars on military spending than the world's next nine-largest militaries, or most of the other countries in the world, combined. And when it comes to failing to feed its people, the U.S. certainly does not have a good track record.

The U.S. has the sixth-highest hunger rate of the economically developed OECD nations. More people go hungry in the U.S. than go hungry in Poland, the Slovak Republic and -- for extra irony -- South Korea. The U.S. has just slightly less hunger than Estonia. As Slate put it, "America may have the worst hunger problem of any rich nation."

As much as the U.S. criticizes Russia, the two countries have roughly equivalent hunger rates. Meanwhile, fewer people go hungry in poverty-stricken India and Brazil than they do in the U.S., the most powerful country on Earth. And China's hunger rates are just around one-third of those of the U.S.

46.7 million Americans, roughly 15 percent of the population, were in poverty in 2014. Almost one in four children under the age of 18 live in poverty. Among black and Latina/o Americans, poverty rates are even higher.

None of this is to say the DPRK (the official name for North Korea) does not have its own problems; it certainly does — and large ones, at that. But let's not fool ourselves. Carson is accusing North Korea of the very vices his own country exercises in spades. This is the textbook definition of hypocrisy.

Off-the-charts, out-of-control military spending and widespread hunger are some of the few examples of actually existing American exceptionalism.