Our crisis can't be blamed on the NRA alone. Too many Americans operate under the delusion that guns make us safer 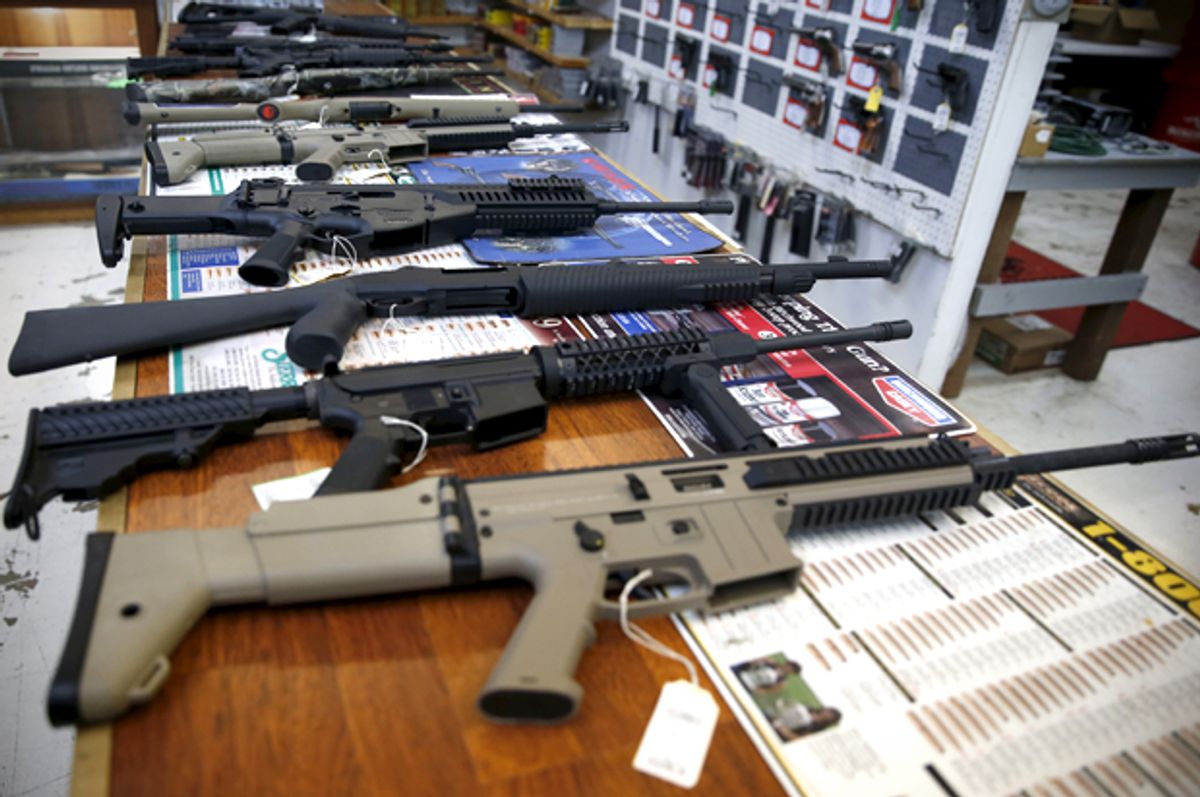 On the third anniversary of the Sandy Hook Elementary School massacre that left 20 children dead, Gabby Giffords lashed out at Congress for not adopting new gun controls and singled out a key factor in their cowardice.

“Congress will do exactly what its members have done every week since those 20 kindergartners and first-graders were murdered in their classrooms: nothing at all,” the ex-congresswoman, who was nearly assassinated, wrote in USA Today. “That’s cowardice, an embrace of the shameful status quo we’ve grown to expect from a Congress in the gun lobby’s grip. Many of my former colleagues are in the cold clutches of pessimism and its key ingredient: fear.”

Electoral retribution from the National Rifle Association’s political hit men is not the only place where fear contorts the realities and responses to gun violence in America. Fear drives much of the obsession with guns. It’s seen in the mistaken belief that having a gun makes one safer, and in gun industry-inspired fantasies that armed Americans are heroes waiting to vanquish evildoers. Studies by scholars and others have repeatedly disproven and debunked these myths.

If you think this is hyperbole, look at the following data points, poll results and excerpts from recent studies by top criminal justice researchers and experts. What most Americans believe about gun ownership is driven by fears that distort the reality of gun violence and how to lessen it.

1. Mass killings are not the worst violence. The gun-buying public ignores where most gun violence in America occurs. Instead, it goes on shopping sprees after highly publicized shootings or after gun evangelists spread propaganda that the federal government will start confiscating weapons. Gun sales spiked after the mass shootings with the most victims and after the election of a gun control-favoring president, Barack Obama, the New York Times reported after analyzing background check data from before the 9/11 attacks in 2001 to this month's San Bernardino shooting. Those spikes contrast with the reality of most gun violence, which annually is 20,000 suicides and 10,000 homicides, including domestic disputes and accidents.

2. The deadliest weapons are very profitable. The NRA and gun makers are happy to fan fears of terrorism and government takeovers because it’s good for business. One reason the industry has been pushing semi-automatic weapons in recent years—which the most notorious mass shooters have used—is because they use more ammunition, MarketWatch.com reports. It notes that bullets accounted for nearly one-third of industry profits, or $4.6 billion in sales in 2013, compared to 26 percent in 2008. “Guns and ammo are a lot like printers and ink cartridges,” it said. “While you buy the former relatively infrequently, you buy the latter often—and that’s where you wind up doing a lot of your spending.”

3. Feeling safer is not the same as being safer. Two-thirds of gun owners say they feel safer because they have a gun in their home, the nationwide pollsters Rasmussen Reports reported in early December. "Feel" is the key word here, because other studies released in 2015 show the opposite: that having a gun increases the chances of a spectrum of gun-related violence at home, from suicides to use in domestic disagreements and fights to accidental shootings.

A detailed report, “Firearms Training and Self-Defense,” shows what happens when guns are within easy reach. Contrary to the conventional wisdom held by gun owners like those in the Rasmussen poll, few criminals are shot in homes. “Instead, the report concludes, “guns in homes were commonly used to intimidate the occupants, including spouses and other family members.” In other words, many people who buy guns because of fears prompted by media coverage or gun industry propaganda end up using the weapons against people they know at home, not criminals or terrorists.

4. Like any warzone, arbitrary victims abound. This is where the firearms training report delves into detail. The presence of guns leads to other problems, from increased gun-related domestic abuse to more gun-related violence outside. It states that too many unstable people own guns, first by citing 2015 research that finds “22 million Americans—8.9 percent of the adult population—have impulsive anger issues and easy access to guns; 3.7 million of these angry gun owners routinely carry their guns in public, and very few of them are subject to current mental health-based gun ownership restrictions.” It continues, “Researchers also found that people with lots of guns—six or more—are more likely to carry their guns in public and to have a history of anger issues.”

The unsurprising result is that many innocent people get injured or killed, the experts say, and they explain why: “Because of sudden fear responses, it is neither rare nor unusual for persons possessing a firearm to have mistaken non-threatening actions of family members, neighbors, and others and have regretted causing serious injury or death."

5. Almost all gun deaths not justifiable homicides. Gun-control groups regularly analyze available FBI statistics—which are incomplete, as many states don’t report—to determine when gun use is justified for self-defense purposes. In 2012, there were 259 justifable homicides nationwide, according to the FBI’s statistics parsed by the Violence Policy Center. Of these, three-fourths were with handguns. The Washington Post’s analysis of this same dataconcluded, “For every single justifiable homicide in 2012, there were 34 criminal gun homicides, 78 gun homicides and two accidental gun deaths.”

In other words, for every criminal stopped, 34 innocent people died because someone misused a gun.

6. More guns means more crime. Since the late 1990s, the NRA has beenproclaiming that more handguns in public leads to less crime. But a team of Stanford University and Johns Hopkins University researchers examined the NRA's data, expanded it over a longer time period and found the opposite was true: more guns in circulation mean more gun-related violence and crime.

“Our analysis of the year-by-year impact of RTC [right to carry] laws also suggests that RTC laws increase aggravated assaults,” they wrote in 2014. “Our analysis of admittedly imperfect gun aggravated assaults provides suggestive evidence that RTC laws may be associated with large increases in this crime, perhaps increasing such gun assaults by almost 33 percent.” There’s also “evidence that RTC laws increase rape and robbery,” these researchers said.

Thus, more guns anywhere—at home or in public—increase violent behavior, not the opposite.

7. Busting the biggest lie, that the good guys prevail. After every mass shooting or terrorist event, the gun lobby asserts that “good people” with guns will always defeat “bad people” with guns. The NRA’s mantra is that the answer to humanity's flaws is to arm everyone, from teachers to worshippers. The NRA said this after Sandy Hook in 2012, after the Charleston church shooting this spring, and we're hearing it again now, after San Bernardino.

Academics who studied this claim have shown it is a dangerous vigilante fantasy. Simply put, most people who own guns are insufficiently trained to act as effective lawmen; they don't know what they are doing. The heart of the firearms training report evaluates how typical gun owners respond in a range of crime scenes. These law enforcement experts say most gun owners don't know how to confront unstable people; don't have the physical stamina to be in a potential life-or-death fight; and don't possess the self-control to stop themselves from firing indiscriminately, injuring bystanders. The lack of any of these variables could quickly turn the people the NRA puffs up as would-be heroes into bloody casualties.

“In the same way that athletes train continually to acquire and hone their physical and mental skills, civilians must be willing to do the same to acquire and hone their firearm skills,” the report on firearms training and self defense said. “These skills are learned behavior that will diminish without training over time. Even military and law enforcement personnel who have had extensive training with a firearm cannot maintain their firearm proficiency without continual training. The lack of quality initial training and repeat training over time is potentially a disaster waiting to happen.”

Americans understandably feel insecure after incidents like the San Bernardino mass shooting or the attack at a Planned Parenthood clinic in Colorado Springs. Yet the gun industry has been making billions each year by preying on these fears. The weapons it sells perpetuate an unending epidemic of gun-driven suicides, and gun-driven domestic and societal violence. Its promotion of militarized automatic-firing arms, which cause the greatest carnage, keep industry profits growing.

Meanwhile, too many Americans erroneously believe the gun lobby’s fantasy that if they have a gun they can be one of the “good guys” who will stop the “bad guys.” As the firearms training experts wrote, “Safe and effective firearms usage requires mental preparation, legal knowledge, judgmental awareness, as well as firearm expertise, skill, and familiarity.” And they emphatically saidthat does not describe most gun owners. “Legislators and public policy makers must stop denying the reality that carrying and possibly using a firearm is the same as riding a bike and that once you learn you are ready for the Tour de France or the Olympics.”

Fear, and the irrational conclusions flowing from it, distort the realities of gun violence and gun control in America today. It’s not just the fears of so many members of Congress that the NRA will unseat them if they support the slightest gun control laws, as Gabby Giffords said this week. It’s also the fears and the uninformed beliefs of so many gun owners who don't comprehend that the prevalence of firearms in American is the problem, not the solution.